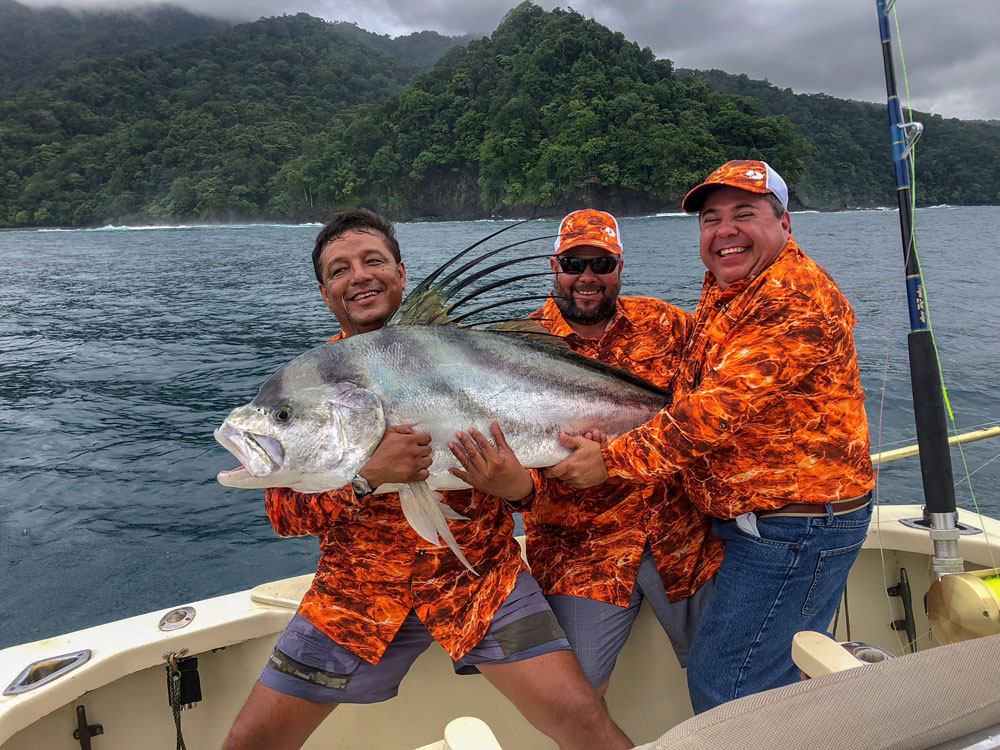 The billfish action has been consistent the past couple weeks with multiple shots at Marlin each day. Our anglers have fought some nice size Marlin in the mix. Larger females of 500 lb plus have been reported frequently. The Sailfish have come through in greater numbers than expected this time of year, but we’re not complaining. They have been loads of fun! The bait offshore has been plentiful and can found a bit further out on the current lines schooling up around the flotsam. Matching the hatch has been the Captains’ trick in terms of bait size. The Dorado are always around this time of year and the oversized bulls have been annihilating the Marlin baits and putting up some incredible fights. The Yellowfin tuna are still here and anglers have been getting a real kick out of hooking them up on poppers.

The rains have been consistent over the past few days arriving in the evenings helping cool off the day. Offshore we had a little bit of swell come through but it has calmed down to flat calm seas. The current lines are stacking up making for some productive fishing. The sea surface temperature has been a wonderful 84 degrees Fahrenheit with the current chugging along to the north at around 1.5 knots. All in all, it has been perfect conditions for fishing. 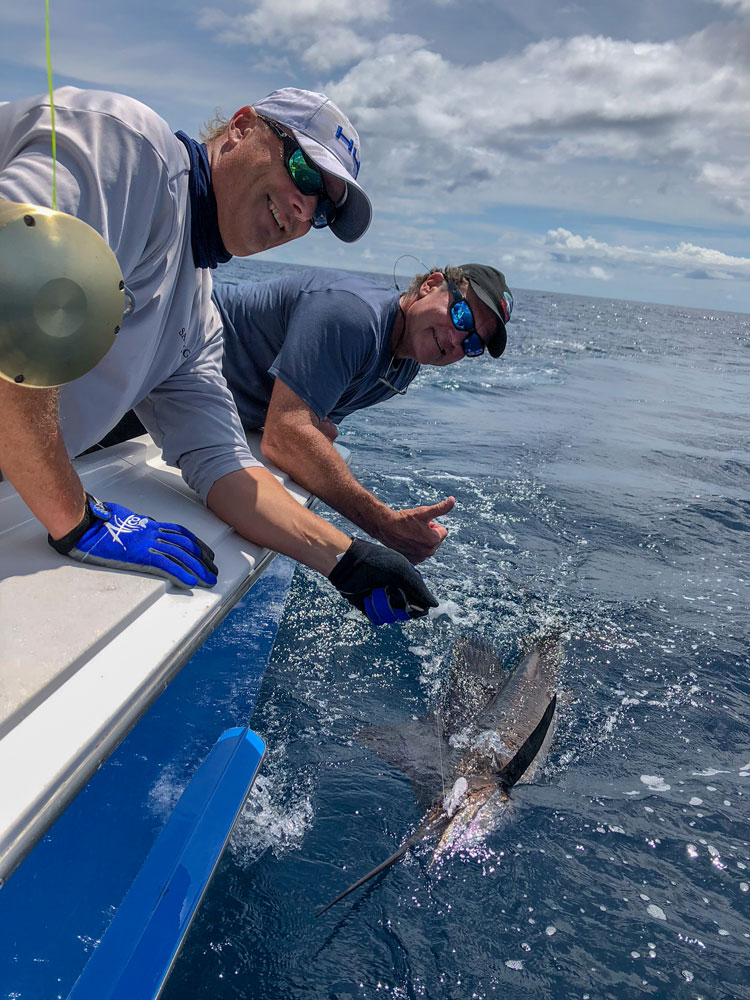 Dr. John Waldrop who has been visiting us at the lodge for years was joined by his son, Mulford, and friends Hunter Bryan, Pierce Miller, Chad Misko, and Eddie Jones. The gents arrived to the lodge on an early flight and went straight out on the water. They group opted for two guys per boat and what a time they had! On one particular day Hunter and Chad arrived back at the dock by 09:30 to offload around 400 lb of Yellowfin Tuna before heading back out. When they got back to the dock that afternoon they were flying eight Roosterfish flags and two Cubera Snapper flags. During their stay, John released Marlin along with the rest of the group. Eddie, however, had special attention from Neptune. On one of the days out, the boat he was fishing on went two for four on Blues with Eddie catching and releasing them both. The guys had a blast on the water and also spent some time handing out a few gifts to the kids in the local village after a fun-filled game of soccer.

Tommy Baugh and Lisa Holliday come to see us every year and it was great having them back for their annual trip. This year for three weeks. Tommy and Lisa are both avid anglers and it is always fun getting to catch up. The couple had incredible fishing releasing a Marlin almost every day with the average fish being between 300 lb and 400 lb. Tommy and Lisa catch all of their fish on stand up tackle and so their Black Magic harness got put to good use. The couple released a Boat Slam on one of the days and over 50 Sailfish with some nice-sized Dorado in between the billfish action. I know that they need bit of a rest after all those fish. We are already looking forward to their trip next year. Our lodge dogs, Emma and Rosie, are also already looking forward to their return.

We always love having Ed and Geraldine DeMaria down to visit. When they come to the lodge it is always with big smiles, hugs and a wonderful reunion. This visit was no different and we loved having them here for Ed’s 74thBirthday. The couple fished on Miss Texas and what incredible fishing they had. They released Black Marlin and loads of Sailfish. The Dorado that they brought back to the dock was delicious in the afternoon as fish fingers but the fish that got everyone excited was when Ed came back to the dock on his birthday with a 174 lb Yellowfin Tuna.

Dr. Leon Mead was back at Tropic Star but this time with his son, Spencer, and his friend, John Roarty, AKA Mr. Detroit. Leon has been fishing with us before at the tail end of the Marlin season and didn’t have the best luck last time around. Neptune had taken note of this and during this trip they experienced a hot bite. The guys fished on Miss Panama with Capt. Mario and had constant action. John released his first and second Marlin in a single day and Spencer released multiple Marlin with dad right beside him. The guys released lots of Sailfish during their four days of fishing along with Yellowfin Tuna and Dorado. They were not done yet, inshore they released multiple species of Snapper and brought in a Grouper just for good measure. It was fun seeing Leon with his son and John. We shared more than a few laughs over some cold beverages at the pool.

Friends Matthew Wallin, Cory Svabodny, and Chad Grimm met at Tropic Star Lodge for their first deep sea fishing experience. And all three guys walked the plank! They all released their first Sailfish and Marlin. Matt and Cory’s Blue Marlin was called at 350 lb. However, Chad “beat” his friends releasing a Blue Marlin called by Captain Mario at 350 lb, however, Chad insisted it was larger than his friends calling it at 352 lb. Chad has been chasing his Marlin for over 15 years and we are oh so happy that he achieved his goals. Chad also released his first Pacific Sailfish of 140 lb and his first 60 lb Roosterfish. The guys’ fun loving competitive nature was contagious.

Nancy and Jim Frost from Payson, Arizona visited us for the first time. Both are avid anglers and lovers of the outdoors and it was fun to share in their joy of how special it is to be out in the middle of the Darien Jungle. The Frosts arrived with two goals. For Nancy to catch her first Marlin and Roosterfish, and for Jim to catch and release a Cubera Snapper. And they did just that! Nancy released her first Marlin, a Blue Marlin of 350 lb. That same day she went on to release a 500 lb Blue Marlin. What a day! Later that week Jim fought and released a Cubera Snapper on popper and Nancy released her Roosterfish.

Chuck Newcombe and John Hollinshead visited us from Texas for a guys’ fishing getaway. They had an action packed week offshore. John and Chuck released more than 20 Pacific Sailfish and multiple Marlin during their stay. They even released a Boat Slam releasing two Black Marlin, one Blue Marlin, and two Pacific Sailfish. That made the 24th Slam for the season.

The Tropic Star family has grown over the past few weeks with some incredible people coming to join us for their first time at the lodge. We are so excited to be part of the adventure with them and it is great knowing that they will be back soon. From sunset drinks in the pool to unbelievable fishing stories with the photos to back them up. It is amazing being able to share Tropic Star with so many wonderful people and we can’t wait to see everyone who will be visiting us next week.