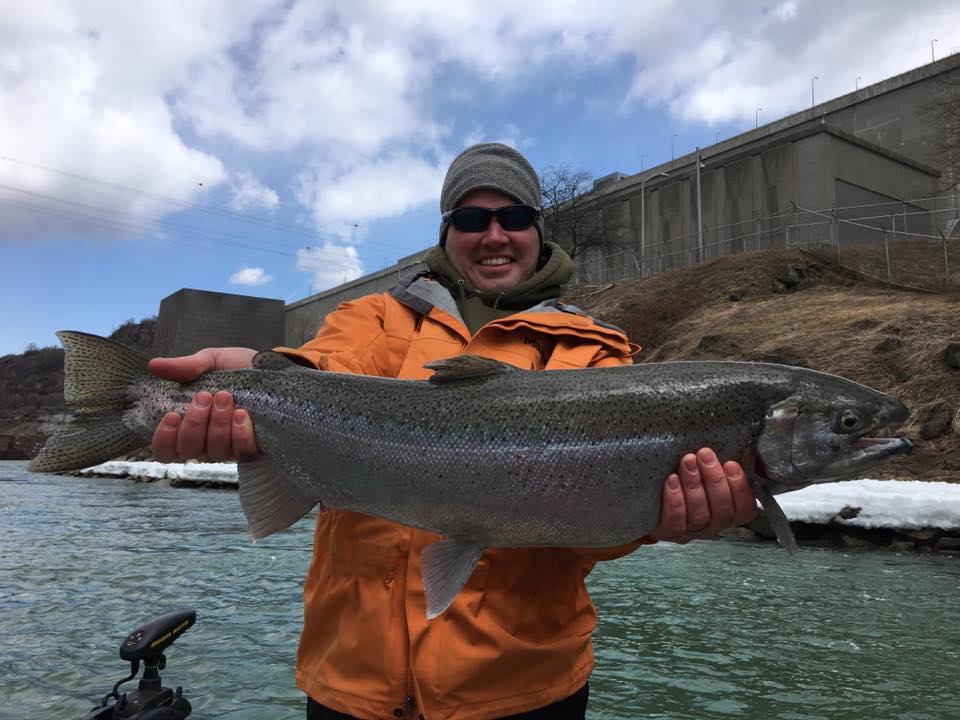 Local fishing is really starting to ramp up with the opening of the inland trout and salmon season on April 1. Increased opportunities become available throughout the state, spreading out the anglers and giving everyone a spot to cast. Even some inner city-type situations will exist early in the season such as Hyde Park Lake, Gill Creek and Oppenheim Park Pond in Niagara Falls. Be sure to mark April 5 on your calendar. Oppenheim Park Pond, along Niagara Falls Boulevard. in Wheatfield, will receive 100 browns and 200 rainbows around 10 a.m. Hyde Park Lake in Niagara Falls will receive 200 2-year-old browns and 1,650 yearlings at 11 a.m. In addition, Gill Creek will be the recipient of 540 browns from Buffalo Avenue upstream to the dam at the la

In Erie County, April 4 will see 2,800 yearling rainbows stocked in Cayuga Creek in Lancaster. On April 6, Sprague Brook Park Ponds A and B, Veterans Pond and Foote Road Pond will receive over 700 browns and rainbows. On April 7, Main Park Pond will get a dumping of 300 ‘bows and Ellicott Creek in Amherst will receive 1,250 rainbows. Pre-April 1 stockings:

With an increased amount of rain in certain sections of the region, you’ll need to keep an eye on the weather forecast and do your best to avoid the wet stuff in some streams. If a stream is low and clear, look to see where the rain will help matters along. Danny Colville with Colville Outfitters in Hamburg hooked five steelhead on Eighteen Mile Tuesday morning. However, bass and suckers are starting to show up. Canadaway is doing much better and Cayuga and Buffalo creeks are fishing decent with some fresh runners in the system.

Eighteen Mile Creek was flowing at 530 cfs coming out of the weekend and it was down to 310 cfs at mid-day Tuesday. It could be fishable by the weekend. Water was stained from Burt Dam to the piers. The east pier was totally ice-free and the west pier was almost there. Cast spoons or spinners. You can also fish worms, minnows or egg sacs under a float. The same will work over in Wilson. Best bet in the streams will be the smaller ones like Keg, Hopkins or 12 Mile. To the east, Johnson Creek was starting to clear up and so was the Oak. Bullhead are starting to hit in Wilson, just in time for the Wilson Conservation Club Bullhead Tournament April 7-9. Call Eric at 628-6078 for details.

Everyone is still talking about the lunker 31-pound brown trout reeled in by Bob Klemm of Pennsylvania Monday morning along Fort Niagara! He was fishing with his brother Rich from New Jersey and Capt. Frank Campbell of Niagara Region Charters. The water was slightly off-color and fishing was a little tough, but boats were reporting a mixed bag of steelhead, browns, lake trout, bass and walleye. Klemm was using a spottail shiner, but egg sacs have also been working very well, especially pink. Shoreline casters up in the gorge have been struggling a bit the past three or four days, but it should improve as waters clear. The New York Power Authority fishing platform, gorge stairs and upper reservoir all open April 1.

Crappie action has started in the canals according to Mike Sperry at Chautauqua Reel Outdoors. Best times are early morning and after dark. Emerald shiners, tube jigs and small marabou jigs fished under a float. Good numbers of perch, too.

The big news this week was the 31 pound brown trout caught by Bob Klemm of Pennsylvania fishing with Capt. Frank Campbell of Niagara Region Charters. That’s all we are going to tell you this week because it will be a feature in the Buffalo News next week on Thursday, April 6. You have to hear the whole story on this one. Lower Niagara River trout action has been decent from both boat and shore. Some days you have to work a little more than others. Best drifts have been Devil’s Hole and Artpark for rainbows and lake trout, but you should be able to find trout throughout the river system. Egg sacs have been working best on the steelhead; minnows for the lake trout. Boat drifters are using 3-way rigs to bounce the bottom. For browns, target down river closer to the lake with minnows or shiners. From shore, casters are still using spoons, spinners and egg sacs in the gorge from Artpark to the Whirlpool. The New York Power Authority Fishing Platform in the Niagara Gorge, as well as the stairs leading down to the shoreline along the NYPA access road near Niagara University, will be open for business on April 1. Also on April 1, the NYPA reservoir is also open for fishing. The NRAA John Long, Sr. Memorial Raffle and Feast is April 1 from 2 to 6 p.m. at the Niagara Active Hose on Lockport Rd. in Niagara Falls. Great eats!

The weather forecasters are calling for some rain this Friday so that could put a damper on the stream action off Lake Ontario. Burt Dam and 18 Mile Creek is stained, but there is good flow. Silver steelies are being caught but you do have to work for them. Jigs tipped with wax worms or grubs will work as will small floating stickbaits two to three inches long in rainbow color patterns. There is no ice on the piers any more so catching hardware like spoons and spinners is the way to go. Minnows and worms will also work. Smaller creeks like Keg, Hopkins and both branches of 12 Mile were flowing nicely. Some bullheads are being caught in Wilson, perfect timing. The Wilson Conservation Club bullhead contest is set for April 7-9. Weigh in is held out of the Wilson Conservation Club, 2934 Wilson Cambria Road (Route 425), Wilson. The tournament is based on your best two fish with the tie-breaker being the overall length of the two fish. Any Niagara County waters are eligible. Entry fee is $10 for 13 years of age and older; free for junior anglers 12 and under. The fun contest actually starts at 5 p.m. on Friday and runs until 1 p.m. on Sunday. All weigh-ins will take place from 9 a.m. to 1 p.m. at the Wilson club. You can register at CMC Auto Repair, 418 Lake Street, Wilson or The Slippery Sinker, 5780 W. Main Street (at Jackson), Olcott. If you have any questions, contact Eric at 628-6078.

On April 8, the LOTSA pen rearing project will start at the Town of Newfane Marina starting at 9 a.m. They will ready the pens and get them in the water to prepare to receive the fish.

The Hyde Park Lake, Gill Creek and Oppenheim Park Pond trout stockings will take place on April 5. Oppenheim Park Pond, along Niagara Falls Blvd. in Wheatfield, will receive 100 browns and 200 rainbows around 10 a.m. Hyde Park Lake in Niagara Falls will receive 200 two-year-old browns and 1,650 yearlings at 11 a.m. In addition, Gill Creek will be the recipient of 540 browns from Buffalo Avenue upstream to the dam at the lake. They will be fair fame to the public as soon as they are stocked.