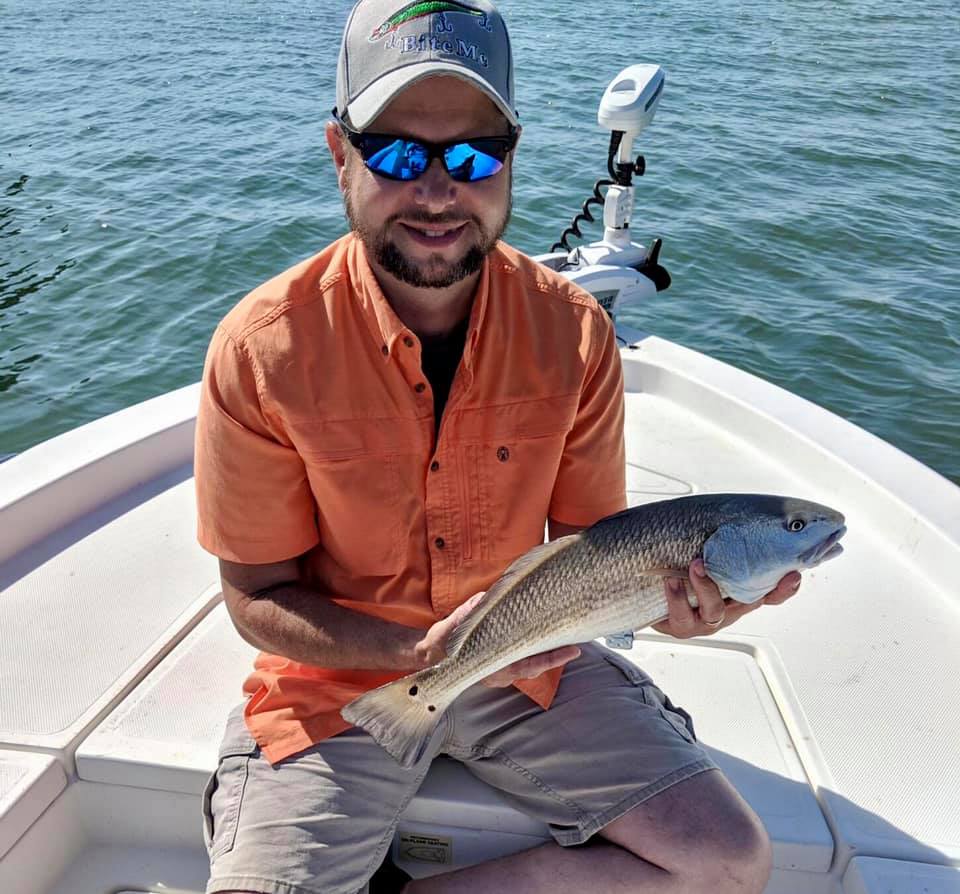 Bluefish and more Bluefish is what we’ve been seeing the last few weeks. Most of the fish have been around the Beaufort Inlet, Coast Guard Station and Cape Lookout area. We’ve been seeing the best action in the clearer water areas, especially when you can find a tide line, they’ve been stacked along it feeding like crazy. We’ve been casting Spanish Candies, Sea Striker Jig Fish Lures and Stingsilvers catching all you want. Also, there’s been quite a few caught trolling Clarkspoons along the beaches and up around Cape Lookout area. I’ve not seen any Choppers yet but they have to be getting very close to moving in along our beaches. We’ve seen some in the 6lb range but we’re waiting on the 10-15lb size Blues. So, we’re hoping these monsters show up any day now for anglers to play with.

Gray Trout fishing’s been just about as good as it gets in our area. We have a great class of fish in our area right now, it’s been awhile since we’ve plenty of 2lb to 4lb fish to be caught. We have been finding them in two areas, they have been hanging out in front of the Coast Guard Station, Inlet area and the Rail Road Tracks back on in the Turning Basin area. Also, we’ve been seeing some big ones at the AR Reefs like 315 and 320 and other Nearshore reefs. Jigging has been the name of the game to catch these fish, we are having the best luck on Stingsilvers, Jig Fish Lures, a NEW Bluewater Candy Jig we have has been working really well and something we caught on to this week has been a Gulp 4” Shrimp on a heavy Jig Head. We have some NEW High-Water Jig Heads in the shop that have been working great for that.

I’ve been getting a lot of calls if the Bonito have shown up yet and we have seen some this week at the AR Reefs. One of our Charter boats caught a handful earlier this week trolling Clarkspoons at AR 315 and caught a couple casting Spanish Candies when they would come up on top. Another good lure to have is the Yo-Zuri DD in Hot Pink top with silver sides, it’s one of our favorites and works very well when trolling around the reefs for these fish. So, the fishing should only get better and better over the next week or so. We even caught a few Spanish Mackerel while looking for the Bonito, so it won’t be long now they’ll be pushing in along the beaches in big numbers.

The Albacore are still pretty thick in the area, they have been on the move over the last couple of weeks. One day, we’ll find them along the beaches feeding very well then; the next day they’ll be on off the beaches like they disappeared. There’s been some shrimp boats showing up in the area so that’s always a good place to look if they are out working along the beach, they love to get behind these boats and feed.

We are still seeing some good Speckled Trout fishing in the backwater creeks, lots of small fish are in the area but for the guys really fishing for them are catching some really nice keeper fish. From what we’ve seen so far, it’s really been one of the best springs on the Speck’s in a few years. As the water keeps warming up, they will get harder to catch because of spreading out from the schools. We have already been catching them on Top-waters like the Spook Jr’s, Mirrolure 17MR’s, High Water Plastics, Z-Man Plastics all have been working good for us. Anglers also are catching them on Live Mud Minnows from the shop floating corks in the creeks and around oyster bars.

Red Drum are starting to move in the backwaters good now, we had some customers stop by yesterday afternoon with some nice ones and reported they caught at least 30 or so in just a few hours of fishing. Areas that we have been seeing them has been around Docks, Bridges and some hanging on the Port Wall. I’m sure some are up in the Marsh areas but just not that many anglers have been up in the skinny looking for them. Cut Bait and Live Mud Minnows is what we have been having the best luck on, but I’m sure if you searched the Marsh areas you could find some Top-water action, Spinner Baits, Gold Spoons, Berkley Gulp and Z-Man Plastics.

The inside Sea Mullet bite has slowed down a bit, man what a run we’ve had this Spring they have been in the inlet area for a solid two months. We are still seeing some on the inside but seems what we saw this week the schools of the fish have moved back to the ocean. One customer caught a good mess of them around the Dead Tree Hole area back toward Barden’s Inlet area at the Cape. Also, the Piers have been seeing some good action so that’s telling us the fish are on the move, we weighed a few this week that’s been over 1 1/2lbs size. Still, the Sam’s Gitter Rigs have been working the best tipped with our local bait shrimp, just hard to beat that combo when it comes to the Sea Mullets.

Sheepsheads are really starting to move in the area for us, the guys working on the AB Bridge have been getting some Fiddler Crabs from us and having great luck. They are reporting seeing them swim all around the pilings and also starting to hear the same report around the Beaufort High Rise Bridge. We do have Live Fiddler Crabs in-stock now and have the Fiddler Crab Jigs that’s been working well.

The local Oceanana and Bogue Piers have been seeing some great action the last two weeks, if you like to Surf and Pier fish now’s the time to get out there. Over the last few days, the bite has been off a little because the water has been dirty but we looked at it today and things are starting to clean back up which will turn the bite right back on. They have been seeing plenty of nice size Sea Mullets, Puffer Fish, Black Drum, Trout and Blue Fish. Most anglers coming by the shop are getting our local caught bait Shrimp, Squid and Mullet. The Fishbites also have been working well for the Surf Anglers. Also, they have been catching Blue Fish plugging Got-Cha Plugs, even seen a couple of Spanish in the mix. So, with the first signs of the Mackerel it won’t be long and they will be here in good numbers all over the place.

As far as the Surf, anglers fishing the Fort Macon State Park area and along the beaches are seeing the same kind of action as the Pier anglers. Like I said before, now’s the time to get out if you like the Surf Zone, some of the best fishing of the year going on right now as it will slow down a bit after the Spring runs of fish stop when it gets hot.

Well, pretty simple when the WIND isn’t blowing the fish are biting, we did have one day this week that the bite was pretty slow but that’s just Spring time Offshore fishing it can be hit or miss. But last week, was totally different with us starting to see the Dolphin make a showing which is a few weeks early for our area.

The Wahoo have still been in the mix along with some nice Yellow and Black Fin Tuna catches over the last few weeks. So, once we start to get some steady days where the Ocean can do its thing of what we are seeing so far, the Offshore fishing’s going to been on FIRE. Like I mention in the last fishing report most of the Wahoo have been caught on the Planer Rod, when it comes to Hoo fishing that’s a tool you must have. We have them in the shop set up ready to fish, 80W / Star Rod Combo and 50W / Star Combo set ups.

Also, we have a fresh shipment of Ballyhoo from Baitmaster and Bionic. When it comes to lures for Offshore, we have you covered there also from local made Full Box Sea Witches, local made Monk-A-Lure one of the best lures ever, Cowbells, Custom Dinner Bells from Big Nic, Fathom Offshore Torpedo Lanterns, and the Nomad DTX Minnows that the Wahoo have been crushing this Spring so far, also now we are seeing some Yellow Fin Tuna being caught on these lures. The DTX Minnows are so simple to use, just put them behind the boat and they do the rest of the work. These are just a few to mention; we have a lot more to choose from. This past winter, we worked hard to get the Offshore section larger, we also have anything you need from hooks to rigging.