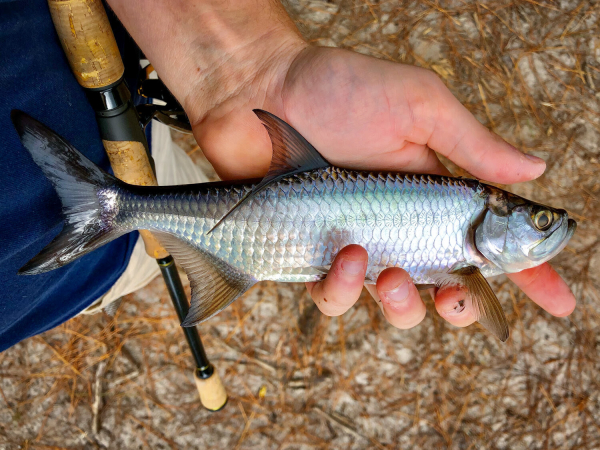 Atlantic tarpon, often referred to as the “silver king” by the sport fishing community, are considered one of the most prized catches in the world. These prehistoric fish, dating back over 100 million years, can reach 8 feet in length and weigh up to 300 pounds. They can be found along the Atlantic coast stretching from Virginia to Brazil and occupying a wide range of habitats and salinities.

Here in South Carolina, adult tarpon are a seasonal visitor, typically arriving when waters warm in summer and retreating to southern latitudes in winter, as tarpon are not believed to tolerate temperatures below 55 degrees Fahrenheit.

But in recent years, members of the public have occasionally reported seeing young tarpon late in the year. There’s no current documentation of successful tarpon reproduction in South Carolina (i.e., these young tarpon are not believed to survive the winter), but the perceived increase of small tarpon in local estuaries interests both anglers and South Carolina Department of Natural Resources (SCDNR) biologists. As ocean temperatures change, the ranges of many species appear to be shifting. One example of this is the recent appearance of large enough numbers of shrimp in Virginia waters to fish commercially.

“We know very little about juvenile tarpon in our area,” said SCDNR biologist Matt Perkinson, who coordinates outreach to saltwater anglers. “The conventional wisdom has been that larvae or small juveniles are transported into our estuaries from Florida. However, we’re seeing large numbers of small tarpon, especially in saltwater impoundments, which has caused us to rethink whether local spawning is occurring as well.”

Perkinson therefore took a recent opportunity to collect some data at a local impoundment, where a multitude of 10-15-inch tarpon had been reported. Over the course of a day of hook-and-line sampling, the team was able to tag and sample approximately 50 young tarpon.

“The fish were caught on lightweight spinning gear with mainly topwater lures,” said Joey Coz, who manages SCDNR’s Marine Game Fish Tagging Program. “Once landed, they were measured, a genetic sample was taken, and a small nylon tag was applied to each fish before being transferred from the impoundment to the adjacent open creek system.”

Nylon tags are a widely used tool for tracking fish movements over time. Tags can last for many years and do not interfere with the fish’s ability to grow or swim. (Photo: K. Swain/SCDNR)

Two months later, the team received their first recapture report. An angler had reported recapturing one of the tagged tarpon in Shem Creek, approximately 25 to 30 miles from the initial release spot.

“I was surprised by the location where the fish was recaptured,” Coz said. “That was a pretty long journey over a short time for such a small fish, and I thought for sure the first recapture would be somewhere closer to the impoundment or to the south.”

Perkinson & Coz hope that additional reports from angler recaptures will shed some light on the migration patterns of these juvenile fish and that the genetics of fish captured in South Carolina can eventually be compared to those captured in Florida and elsewhere to better understand the entire population.