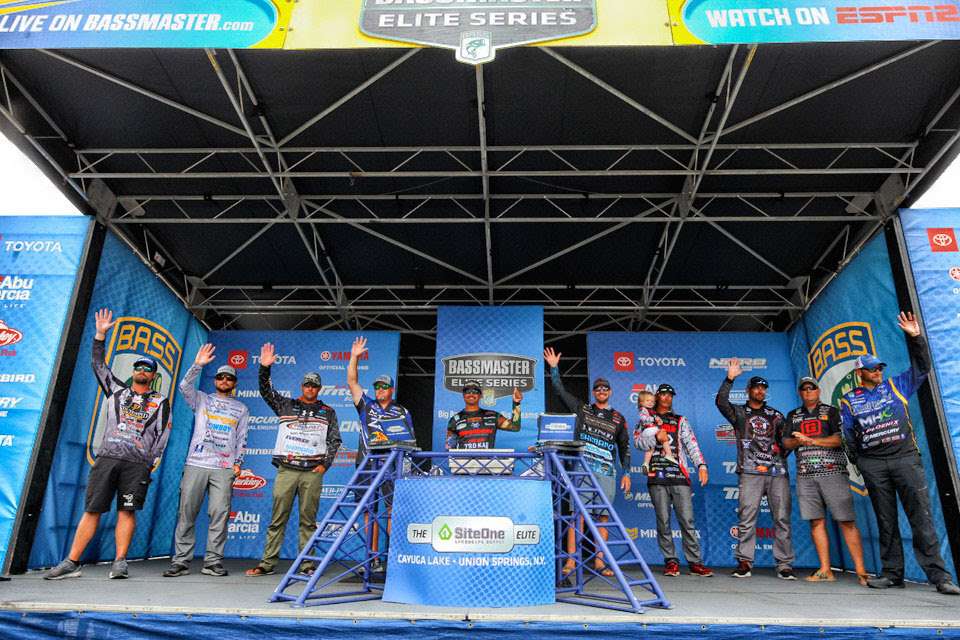 BIRMINGHAM, Ala. — After a 2019 Bassmaster Elite Series season that was widely regarded as one of the best ever, the entire field has decided to come back for an encore.

B.A.S.S. announced the field for the 2020 Elite Series today, and all 75 anglers from the 2019 roster are returning, along with 10 qualifiers from the Basspro.com Bassmaster Opens, two veteran anglers, who returned to the trail through Legends Exemptions, and the TNT Fireworks B.A.S.S. Nation champion.

“To have all 75 guys back from last year — plus 100% of the anglers who were invited — says a lot about the positive momentum we have with the Bassmaster Elite Series,” said B.A.S.S. CEO Bruce Akin. “The reaction to last season was overwhelmingly positive from sponsors and fans, and it’s great that everyone wants to continue with us on what will be another exciting journey in 2020.”

The list of returnees will include Scott Canterbury who fished a brilliant season to secure his first Bassmaster Angler of the Year title. Longtime Elite Series veterans like Drew Benton, Mark Menendez, Hank Cherry, John Crews, Micah Frazier, Matt Herren, Bill Lowen and Chris Zaldain will also be back.

A talented 2019 rookie field of anglers that included Rookie of the Year Drew Cook, Lee Livesay and Patrick Walters will now enter their sophomore campaigns with the Elites.

They will be joined by a new talented crop of rookies that includes Eastern Opens qualifiers Bryan Schmitt of Deale, Md., Destin DeMarion of Grove City, Pa., Buddy Gross of Chickamauga, Ga., Austin Felix of Eden Prairie, Minn., and Kyle Welcher of Opelika, Ala. The anglers who qualified through the Central Opens are Wes Logan of Springville, Ala., Caleb Kuphall of Mukwonago, Wis., Taku Ito of Chiba, Japan and Bob Downey of Hudson, Wis.

“Last year’s class of newcomers was obviously the biggest we’ve had since the start of the Elite Series,” said B.A.S.S. Tournament Director Trip Weldon. “That was one of things that made the season so exciting — watching all of those young guys grow into pro fishing stars.

“They put on a great show, and I know the guys who are joining us this year will do the same. I imagine that is why every one of the anglers who were invited to join the Elite Series accepted their invitation.”

John Cox of DeBary, Fla., actually earned an Elite Series invitation through both Opens divisions, finishing second in the Central Opens and fourth in the Eastern Opens points. This will be his first season on the Elite Series, but he will not be eligible for the 2020 Rookie of the Year race due to career earnings with B.A.S.S. and FLW.

Any angler who has a combined earnings of at least $500,000 with B.A.S.S. and FLW is not considered a rookie. Schmitt will also be ineligible for Rookie of the Year honors.

Instead, Cox and Schmitt will join Brandon Palaniuk and Gerald Swindle as established anglers competing on the Elite Series. Palaniuk and Swindle, who left briefly to fish another pro circuit in 2019, are returning on Legends Exemptions that are sometimes offered to anglers who have accumulated points through winning Bassmaster Classic and Angler of the Year titles.

“My reason for wanting to return to the Elites Series was simple — it’s home,” Swindle said when he made the announcement he had accepted the Legends Exemption. “It’s all I know, it’s what I’m comfortable with, the format, the weigh-ins, the tournament schedule, etc.”

Other industry giants like Rick Clunn, David Fritts and Jay Yelas — three former Classic champions with 26 wins between them — will also be back, along with Brandon Cobb and Jamie Hartman — a pair of two-time winners last season.

The 2020 Elite Series schedule will begin Feb. 6-9 with the AFTCO Bassmaster Elite at St. Johns River in Palatka, Fla. From there, it will wind through eight states for nine events as anglers compete for cash and prizes and attempt to qualify for the 2021 Academy Sports + Outdoors Bassmaster Classic presented by Huk.

Each tournament will begin with 88 anglers on Days 1 and 2 before the field is cut to 40 for the semifinal round on Day 3. Only the Top 10 remaining anglers will fish the final day of each event with a $100,000 first-place prize on the line.

“Momentum is a powerful thing in any business or sport,” Akin said. “We built a lot of momentum last season, and we have a field of anglers who will help us keep it going this year.”