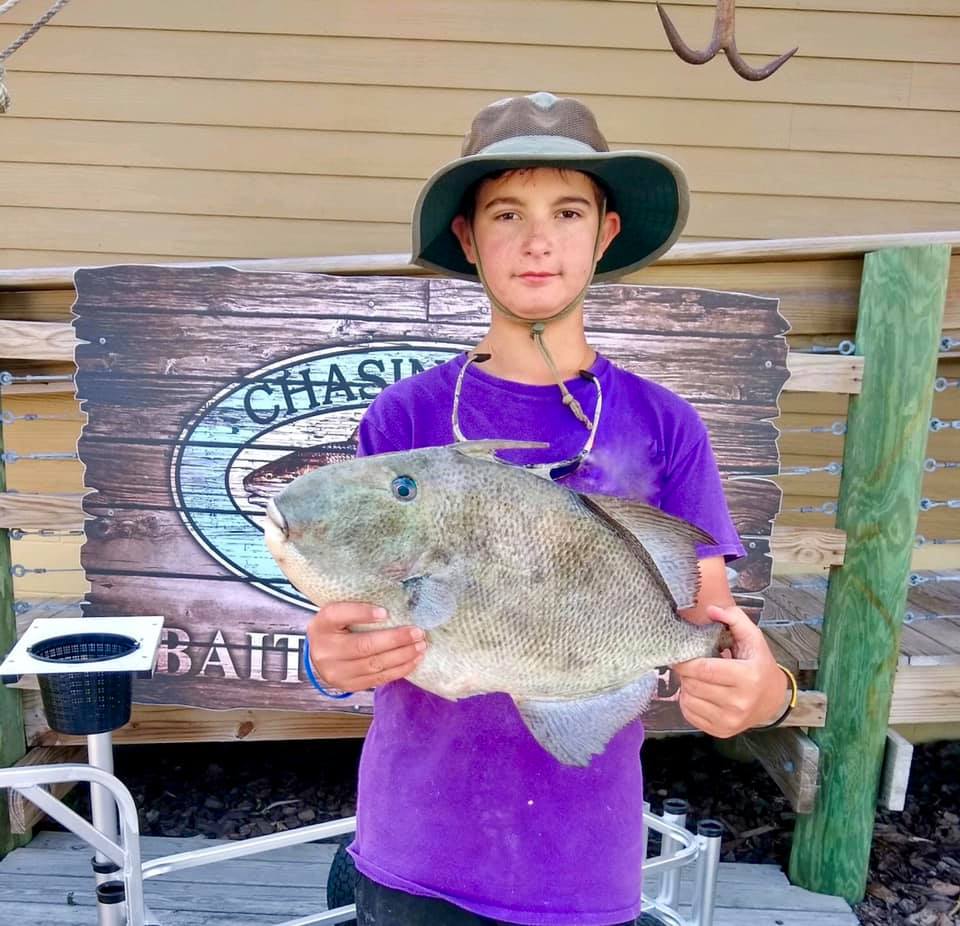 Well, it’s hard to believe that our kids are heading back to school and Football Season’s starting. But, with the heat we’ve seen this week summer has been far from over. Does look like we’re going to see a little cool down this weekend with a wind switch to the North, which should knock down the heat wave a bit. But, as we complain about the heat; fall is on its way down at the Crystal Coast even with the heat this week. We started seeing the first signs of Yellow Butterflies show up in the area. As the old timers say in our area that’s the first signs of a new season on the way plus the Spot will be making their fall run in the next month or so. We’re just waiting on the first mullet blow of the year now, which if the forecast holds it should happen this Sunday/Monday and when it does usually it turns up the bite.

Flounder bite still remains the best in our area that we’ve seen in years.  As most of us know, the vote happens today in Raleigh to see if the season will stay open or close for our NC waters.

If you follow our Facebook page, I’m sure you’ve seen all the fish we’ve been catching plus customers fish that’s been coming by the shop to get weighed. Just this week, we weighed another fish over the 8lb mark, not sure how many that’s been so far this season but we have seen quite a few fish over the 5lb mark this summer.

Most of the action’s been around the Port area, docks along the ICW and I had a customer last week do well drifting the channel between the AB Bridge to the No Wake Zone in the Turning Basin. The best action with the hot weather has been on Live Mullet or Mud Minnows from the shop. We have weighed a few fish that’s been caught on Berkley Gulp and Jig Head Combo while Trout and Red fishing in the marsh area. Not many people has been hitting the reefs this week but I expect the fish are there to catch, they pretty much stay there this time of the year. Spro Bucktail tipped with Berkley Gulp 4” White Shrimp is the way to go when fishing for the ocean flounder, just hard to beat that combo in our ocean fishery.

The old drum bite has been very off this week, not sure what’s going on. We’re in hopes that the bite is just off this week because of coming off the full moon. Best action we’ve heard of this week has been off the Cedar Island area on cut bait and mostly that fishing has been at night. There’s been a few fish caught this week on corks during the day but it’s been very few. I’ve got a feeling when this North wind hits Sunday/Monday the bite is going to turn back on.  We know there’s fish in the river because a few weeks ago we had a very good week on the fish, really more than we had seen in years past that early.

We just got more “fresh mullet” dropped off last night getting ready for the weekend bite to fire off and it’s some of the prettiest we’ve seen all year. If heading out during the day, the “Blabber Mouth High Water Cork” is all you really need rigged with a Z-Man SwimmerZ or DieZel Minnow. It’s just a matter of finding the fish, they aren’t real picky eaters when you find them. Bait is a key to look for, but don’t waste too much time on bait if you aren’t getting any bites, move on to find more. We have a ton of bait in the rivers right now so not all of them are going to be holding schools of Bulls.

As far as the Slot Fish it’s still been off but we’ve seen a good sign in the last week or so. All in the marsh right now, we have been seeing tons of rat reds. So that means, next season could really be good and even this fall should be good being these small fish grow fast. What we’re hearing from some of guys that catch mullet there’s actually a lot of good slot fish around but for some reason they’ve been hanging more around the Inlet areas this year. When we got our mullet dropped off yesterday the guy was telling me he saw a huge school of Red Drum out around Shark Island the other day. So, we’re in hopes once the water temps start to drop in a few weeks some of the mass schools will move toward the marsh areas to feed up on all the shrimp we have now in the backwaters.

Speckled Trout bite still just about good as we have ever seen this time of year, last weekend one of our charter boats had a trip in the rain and caught trout all day long. Also, a few customers came by with some nice fish and said the same thing. Crazy thing is it’s not been in one area, fish have been all over the place. From Core Creek to Bogue Sound, fish have just been all over the place this summer, can’t wait to see what the fall will bring to us. Already hearing, we could see a really good big fish year of what we’ve seen so far this year. Live Shrimp and Minnows is what we’ve been having the best luck on but we have been catching quite a few on High Water Get Em Shads, Z-Mans and working Top-water Lures early in the day on the flats.

We haven’t seen all that much action on the Spanish this week with the rain we had last week.  I expect most of the fish are hanging just off the beach in the cleaner water and at Cape Lookout since that water stays pretty clear most of the time. Again, when we get those North winds toward the weekend and first of next week it should fire the bite back up. Usually, September is one of our best months for fishing for them, that’s the time they feed up before starting making their way back down the beach in October. These North blows that will start to pattern over the next few weeks makes the Spanish go crazy. Casting for them will be excellent around the Inlet areas fishing light tackle, they will be eating the paint off the Spanish Candies. Also, you’ll be able to catch all you want trolling along the beaches and inlets with Clarkspoons and Bowed Up Spoons. So, be on the lookout for some of the best Spanish fishing of the year getting ready to fire off.

We haven’t put any King Mackerel on the scales this week. Really, the only ones we’ve seen a customer went out to the North West Places earlier this week before the wind machine started up and caught a few on Cigar Minnows and Mack A Hoos, along with a few small Dolphin in the mix. I’m starting to sound like a broken record but again I have a feeling once the wind goes North it’s going to fire back up the bite. Last week, we did weigh a few good fish, so they aren’t all gone just haven’t had the right weather conditions to get out and really go after them. It’s no secret most of the best action has been on the East side of Cape Lookout. But it’s is getting that time of the where we will start to see more and more fish show un in the shipping channel, we have already weighed a few but when the mullet runs start the Kings will show up ready to eat.

We haven’t seen any yet but I expect in the next few weeks we’ll see our first signs of False Albacore start to show. Kind of goes back to the Yellow Butterflies, once we start to see them show the Albacore aren’t far behind. So, if you’re in the ocean over the next week or so keep your eyes open, you might just run into some fish. If I remember right last year, we started to see fish late August.

Not much has changedd with the Sheepshead fishing as it still remains up and down. We for sure aren’t seeing the numbers of fish we’ve seen in the past. But the anglers fishing for them are catching them. All the same places are still producing fish: Bridges, Port Wall, Docks and Rock Jetties. Live Fiddler Crabs and Live Sea Urchins are still the bait of choice and we do have them in stock.

Anglers are catching Flounder, Mullets, Sharks, Skates, Blues, Pompano, Red Drum and Black Drum. We’re in the heat of summer and there isn’t anything running so it’s going to be a mixed bag. You really don’t know what you might catch. Bait Shrimp, Mullet, Squid, Bloodworms and Sand Fleas would all be good choices for bait. Fishing off the bottom will be the best bet.

Not seen all that much action on the Spanish and Blues over the last week, but I really think the water’s just messed up from all the rain and now the last few days with the SW winds got it stirred up. Once the water cleans up, we should start seeing them right back on the beach for the pier and surf anglers to catch.

We are starting to get excited as Wahoo Season is starting to knock on the door at the Crystal Coast. Over the last couple of weeks we’ve seen some decent fish come to the docks along with having customers coming by with some nice fish. Usually, what we see happen is a decent bite early in August, then the fish will disappear for a week or so and show back up in good numbers once we hit September – November. Best areas to fish will be around the Rise and Swansboro Hole areas and we also will have fish on the Big Rock. So, we are getting ready for the Wahoo Season with a fresh shipment of Baitmaster Ballyhoo ready to go.

Also, when it comes to lures for Offshore, we have you covered there to; from local made Full Box Sea Witches, local made Monk-A-Lure one of the best lures ever, Cowbells, Custom Dinner Bells from Big Nic, Fathom Offshore Torpedo Lanterns, and the Nomad DTX Minnows that the Wahoo were crushing this Spring for us.

The bottom fishing has been pretty good with Groupers, Snappers, Hog Fish, Grunts and AJ’s. The East Side beach has been a pretty good area to fish along around the 14 Buoy. Cigar Minnows, Sardines, Mackerel, Squid and Squid Wings all have been good choices of bait. 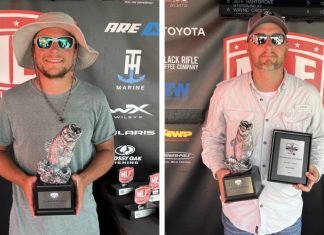