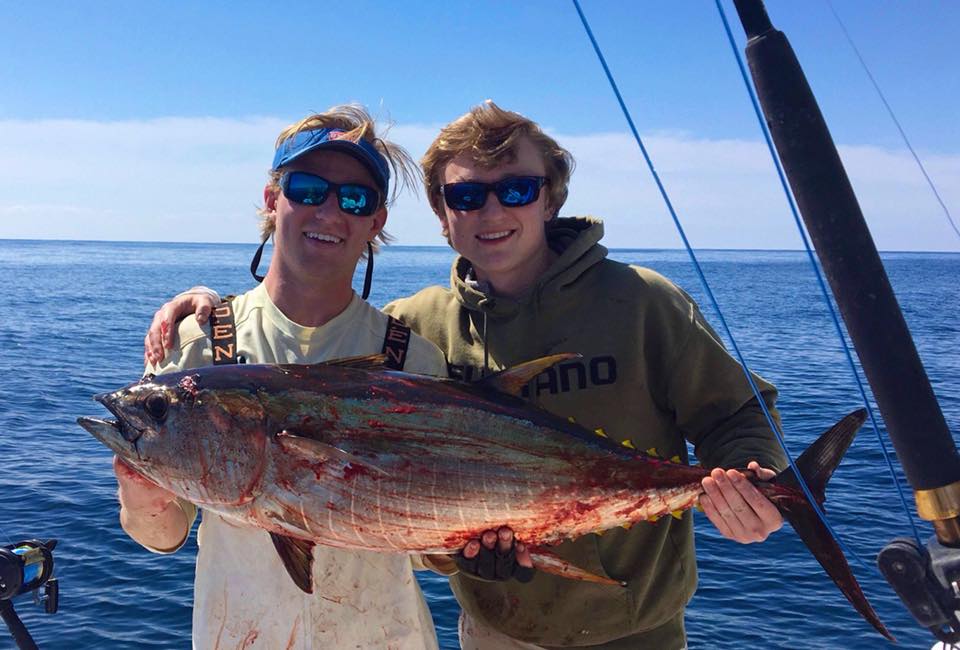 Saw a decent amount of Sea Mullets caught last weekend, not many this week because since Sunday afternoon we have been pretty much under a gale warning, wind and more wind. But it looks like tomorrow things are going to calm down,should be a good bite this weekend. More fish should have moved in over the last few days, even with the winds and rough surf the Oceanana Pier has been seeing some good numbers of fish during the last few days. What we were seeing last weekend from the boats was from the Morehead side of the Turning Basin and around the 25 Buoy back toward the Beaufort Inlet. The anglers having the best luck have been bouncing around from spot to spot not just sitting in one area. Best rigs to use is still “Sam’s Gitters” tipped with Bait Shrimp. The “Gitter Man” is working on some new colors as we speak that we’re pretty excited about. We think these colors are going to catch fish like the “Spilt Chicken” has been producing. Hopefully, the “Gitter Man” will have them ready next week, one will be called “Cotton Candy and the other Sand Flea” so be on the lookout. He was here yesterday so, we are fully stocked ready for the weekend; we’re hoping with the good weather we’ll see a strong bite over the next few days.

Redfish bite has been good again this week, the best action we’re seeing has been up around Shark Island area like over the last few weeks. There’s been a few in the marsh areas around the Haystacks and Core Creek but not as many as we’re seeing along the beaches. Now, more down Bouge Sound there’s been more fish holding in the marsh and bays areas. Berkley Gulp seems to be working the best on the Reds. I’ve heard of some in the marsh areas that’s begun hitting some Top Water Lures so that’s some exciting news.

Last week, we saw our first signs of Chopper Bluefish move in the area! We saw a few along the beaches and some moving in along the flats inside the Hook at Cape Lookout. I’ve a feeling with all this wind we’ve had this week we’ll see more in the area when the weather breaks tomorrow. Last week, there was some huge schools of fish just off the beaches in the 10 to 15-mile range coming this way. If you’re fishing from a boat in the ocean this time of the year always have a Top-water Chugger rigged and ready because you never know when a school of fish will come by and you have to be ready to catch them. We have a good selection of the larger Top-waters you need to catch these fish, they will crush a Top-water plug. Also, beginning to see the smaller Bluefish move in, a few anglers caught good numbers last weekend trolling just off the Shoals with Bowed-up Spoons and now seeing some schools along the beach and inlet area.

Albacore fishing was good last week, I have a feeling this weekend will be even better with the lighter winds on the forecast. The fish will come up on top and feed better making them easier to spot. Best area still has been up around Cape Lookout area, but we did find some fish down off AB Beach last weekend so, the fish are starting to move around now; seems like more and more bait schools are starting to show up.
Been getting a lot of calls if any Bonito has shown up yet, I haven’t yet seen any caught out of our inlet. I did hear of some good catches off Surf City last week so it’s possible to catch some around AR 315 now by trolling Yo-Zuri DD’s. Wouldn’t surprise me to see some caught this weekend with better weather conditions coming our way.
We ran a few Sea Bass trips last weekend, we’re seeing some good action in the 8-mile range just off the beaches. Really nice bass just off the beach at Cape Lookout AR 285 and Atlas Tanker areas but are seeing some decent fish at North West Places and some hard bottom areas closer to the beach.

This week anglers started to see the first Sea Mullet run along the beach, the Oceanana Pier has been having great catches over the last few days. Bait Shrimp fished along the bottom seems to be working the best and some have been catching some on Fish Bite Shrimp. As far as numbers one customer caught over 100 this week so seems like a good number of fish moving through.

With the rough surf some anglers have been catching Red Drum in the suds, fishing with Cut Mullet or Finger Mullet on a Mullet Rig also catching a few Black Drum in the mix.

There’s been a few Chopper Bluefish caught this week, still waiting on the mass of the fish to show up. Last week, they were just off the beach so hopefully; going into this weekend the bite will be on. Finger Mullet Float Rigs will be the best choice when targeting these massive fish in the surf and on the piers. We have been seeing some smaller Bluefish caught off the piers and surf this week also.

A few Spots, Croakers and Blowfish also starting to make a showing along the beaches. We will have in stock this weekend Fresh Shrimp, Live Bloodworms, Nightcrawlers, Red Worms and all the frozen bait to entice these fish to bite.

If you can get over to Cape Lookout the surf anglers have been seeing a good Red Drum bite plus picking up some Chopper Bluefish on the East Beaches.

So, the Surf Zone is starting to pick up, over the next several weeks we’ll see the best action along our beaches before the summer months kick in and the water gets too hot.

We have all the bait you need, been getting a lot of calls about Bait Shrimp – we have plenty of the good stuff. Fresh Mullet has been hard to come by with all the bad weather but we have got our hands on some pretty 3pk Jumbo Mullet that has been working well.  We have plenty of Cut Mullet and Finger Mullet in-stock ready for the “Spring Surf Bite”.

Well guess what… no one has been Offshore this week. We did send some boats out last Friday and Saturday and fish was brought to the scales. We saw a few Wahoo, Yellow Fin and Black Fin caught, I didn’t hear of really any huge numbers of fish caught but enough to make the trips worthwhile. Bottom line is – the fishing isn’t going to get really good until we get some steady weather patterns so the fish can do their thing.

If the weather forecast holds this Saturday and Sunday is looking good before we have wind again Monday and Tuesday, here we go again lol. Best areas still seem to be around the Rise and Swansboro Hole but I’ve heard of a few fish starting to show up around the Big Rock. We have plenty of fresh Baitmaster and Bionic Ballyhoo in-stock ready for action when the weather does break, we have already been told what we have received this year is some good stuff. Also, we  have upped our Offshore section on Squids and lures so come check it out and get ready.

Bottom fishing remains good when the weather allows. Triggerfish bite has been very good out in the 30-40 mile range on the hard bottom and ledges. Been plenty of Bass also, along with Snappers, anglers are having no trouble filling the boxes with fish. We are still seeing some nice Groupers but as we all know they all have to be released back into the water until May 1st.

Getting Prepared For Spring Fishing 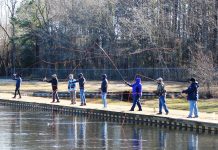