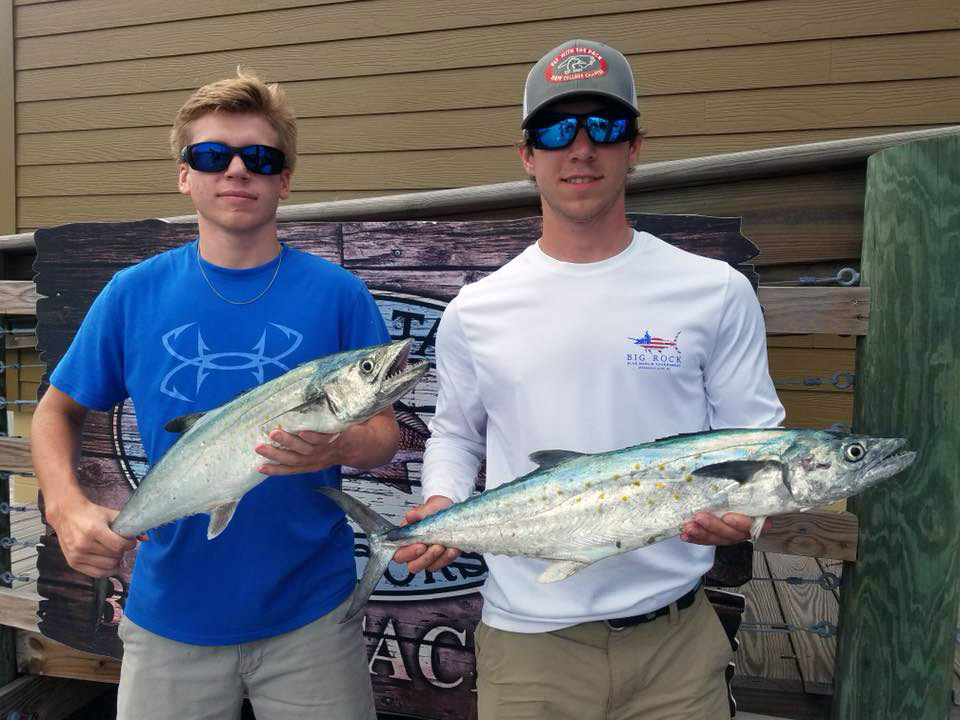 Last week, we saw some unbelievable King Mackerel action, like the big fish we see in October and November, we were weighing 30’s, 40’s, 50’s and even weighed a 60. We haven’t weighed one over the last few days but with the storm popping up last Sunday it kept boats in shore this week. I know of a few boats that’s out today fishing, so hopefully; the fish are still around and will be back to biting since the storm has moved on north of us. Best locations of the larger fish were in the Shipping Channel out of Beaufort Inlet and over on the East Side of Cape Lookout area. Dead Cigar Minnows rigged up on Dead Bait Rigs, Pirate Plugs and the Mac a Hoo have been working very well. Also, we’ve been seeing quiet of few smaller fish around all the AR Reefs being caught and plenty mixed in with all the Spanish we have in the area.

The inside Flounder fishing has picked up this week, Trout Man from the shop has caught quite a few over around the Port Wall this week. Also, one of our charter boats landed a 7lber this week at the bridge. Wild cat from the shop also has been having good luck this week along the dock in the water way, starting to see good numbers of fish holding on the docks. Most of the fish have been caught on Live Minnows or jigging Spro 2oz Bucktails tipped with 4” Gulp Shrimp. The bite still’s been on jigging a Spro 2oz White and Glow Bucktails tipped with a 4” Berkley Gulp White Shrimp; the only way to go.  AR 315, 320 and 330 are all holding Flounder and any other structure you might run across in the ocean.

We have run a few Spanish trips in the last few days and still seeing great numbers of fish along the beaches, with the north winds we have been able to hide along the beach front and catch limits of fish. Looks like after today winds go back to the north so there should be some good fishing for them over the next few days. Again, like last week we’ve been seeing good numbers of the larger Spanish at all the AR Reefs and in the Shipping Channel. Live Bait and Dead Cigar Minnows rigged on dead bait rigs have been getting plenty of action. Also, still casting to the schools of fish feeding around the Beaufort and Barden’s Inlet areas on the Heavy Glass Minnow Jigs and Spanish Candy Jigs we have in the shop.

The Sheepshead bite has been decent this week, seen a few good catches from some customers.  The bite is pretty constant around the bridges and port area, just keep moving from piling to piling and if you aren’t getting bites within a short period of time move to another area to locate fish. Usually, if you start getting bites there’s more than one fish in the area and you can catch a few out of the same spot. Live Sea Urchins and Live Fiddler Crabs is the bait of choice and we keep both in stock. Still seeing some fish come off the CoCo Crab and the Fiddler Crab Jig hooks both have been working very well, so easy to fill the bite with the direct contact.

Redfish bite has been up and down with the very low tides last week now this week the tides have been very high, seems to have the fish in an unstable pattern from a few weeks ago when the bite was so good. Still seeing some fish just, a bit harder to find them this week, Core Creek, adjoining creeks and the Haystacks areas would be good areas to try. Already I’ve been hearing of a few Old Drum being caught. Usually, in the next few weeks is when we’ll really start to see the fishing pick up in the river. We do have a lot of bait in the river right now, remember last year bait was hard to find because of the heavy rainfall. So, if the river stays as salty as it’s right now and the bait keeps coming in we could see a great year on the Old Drum. With a few already being caught things are setting up to be really good. Really any marsh area right now and oyster bars you have a chance of finding some fish. We have weighed a few nice Speckled Trout this week, so that’s a good sign. Also, we’ve been doing a few live release citations over the last week so it looks like we could see a good fall season coming our way again.

We’re seeing a very mixed bag from the Surf Zone since the water has heated up and with lots of swimmers in the water being vacation time. The best area to fish in the summer is Fort Macon Park around the rock jetty and the sound side to fish. Surf fishing is reporting Black Drum, Sea Mullets, Sheepshead, Blue Fish, Rays, Sharks and Croakers. During the summer you really don’t know what you might catch but you can get some action. Bait Shrimp, Mullet, Squid and Live Mud Minnows will be the best baits for action. We have seen some big Red Drum being caught in the last week, the anglers that are fishing hard for them have been having great luck. We have one customer that been catching even some Bull Drum in the Surf Zone at night.

The pier anglers are seeing some Spanish action and Bluefish action early in the mornings and late evenings. Throwing Got-Cha Plugs, Spanish Candies and Glass Minnow Jigs Lures have been producing the most action. Also, a few Flounder is being caught along the pilings with Live Mud Minnows. The Sheepshead have shown up around the pilings but they’re hard to catch, we do have Live Shrimp, Fiddler Crabs and Sea Urchins which will make it a lot easier if you’re going to try to catch a few.

We saw decent fishing over the July 4th week but since Saturday not too many boats have made it out with the storm offshore of us. Last week, we’re still seeing Dolphin around the Northwest Places, Big 10 / Little 10, 14 Buoy and 90ft Drop out to the Big Rock. The fish have been scattered out really all over the place, some boats were catching fish just a few miles out last week. We have a good stock of Ballyhoo in all sizes. With the smaller fish around now, the Monk A Lure has been the go to, you just don’t get short strikers with this lure, when the fish bites you got him. We just got another shipment of these lures so come on by the shop and get you some, just so simple to catch fish with, they just flat-out work.

Most productive has been bottom fishing out in the 30 to 35-mile range. But we are seeing some good action also over on the East Side of the Cape around the Atlas Tanker and 17 Rock. Anglers are catching Grouper, Trigger Fish, Black Sea Bass, Grunts and AJ’s. Anglers are using Squid, Mackerel, Cigar Minnows, Sardines and Menhaden for the best action which we have in stock.