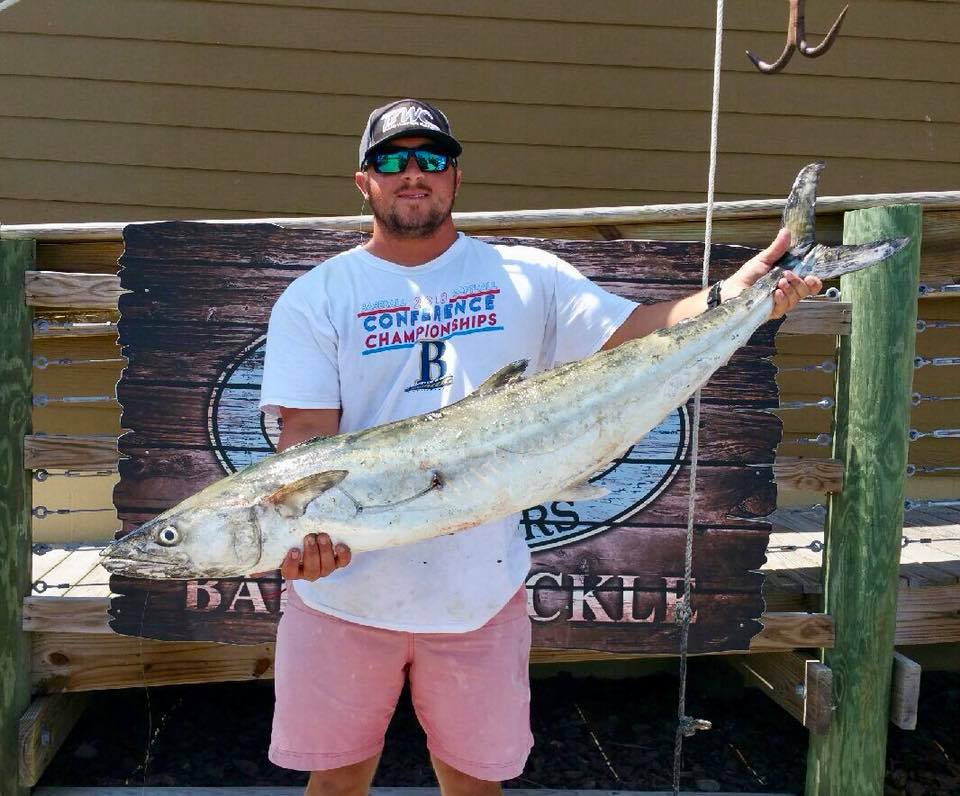 Well, here we are at our last long weekend for the summer, Labor Day. The Summer has gone by way too fast for us but we are very excited that “Fall Fishing” is just around the corner.  Most schools started their 2018/2019 school year this week and we know the kids were ready to get back, lol.

We are expecting great weather for our Labor Day Weekend, so make plans to come; get out on the water and fish not to mention just enjoy the sun and relaxation. Forecast is sunny skies with low winds and only a slight chance of thunderstorms during late afternoon. Now let’s get to the good thing – FISHING.

Last weekend, anglers enjoyed a good weekend of catching fish and that has continued all week.  We had a great week of weather and the bite is only going to get better.

Spanish – has been numerous to say the least all the way up the beach to the Cape.  We have already heard this morning you can almost walk across the Spanish in the Beaufort Inlet.  Anglers brought nice Spanish in with weights from 4 to 6 ½ lb fish this week.  Limits weren’t hard to achieve with them on top by casting small metal lures: Spanish Candy, Jigfish, or Glass Minnow Jigs. Slow trolling along the beach with #1 Planers using a Clarkspoon or Bowed-up Spoon have been putting limits in the boat. Live Finger Mullet fished on the shipwrecks have been producing the larger fish.  We have two tanks full of the perfect size for the weekend but keep in mind they go fast.  Also, there’s plenty of Bluefish mixed in with the Spanish and we even heard of some Hatteras Blues up around the Cape. Plus, around the Cape there’s Albacore early in the mornings.

Flounder – we have seen a good bite on the AR Reefs using the “magic” combo Berkley White 4” Shrimp on a Spro 2oz Bucktail. This is the best and only combo to use when fishing artificial on the reefs.  If you prefer live bait then Finger Mullet is the way to go plus the mullet around the Port Wall and Marshes have been producing some quality fish too.  Last Saturday, a big Flounder was brought in topping the scales at 12 lbs caught from the Port area. Now, if that doesn’t make you want to fish for the flatties because most likely another is laying somewhere close by.  We have weighed several nice fish in the 5lb range this week plus already today one over 6lbs.

Sheepshead – continues to improve each week with anglers bringing in nice fish to be weighed.  We have weighed 8 to over 10lb fish this week.  Anglers are fishing the concrete structures around bridges plus the Port Wall produces good catches.  The key is to adjust your depth until you locate where these bad boys are hanging.  Fishing with Live Sea-Urchins or Fiddler Crabs is the best bait but the Coco Crab is still hanging some fish too.  We have a good supply of both Urchins and Crabs for the weekend. So, make sure to drop by for bait to fish for these bait snatchers.

Red Drum – this week and last weekend anglers reported catching them in the Haystack Marshes, Oyster Beds and Finger Creeks up Core Creek plus the Railroad Tracks has had a pretty good bite.  As we move on into September and October will be a good time to target these fish. There’s a lot of artificial lures to cast: Berkley Gulp on a Popping Cork, Johnson Spoon, not to mention Top-water on the early morning bite.  Fresh Mullet chunked up can be used if you prefer or Live Shrimp or Mud Minnows will produce for you too.

Speckled Trout – there’s been a few nice fish in the same areas as the Reds and this will only improve as the cooler temps begin to come around and the winds shift North. Live Shrimp or Mud Minnows are the best baits for the Specks in the beginning of Trout Season. You can try them at night now here close to the Atlantic Beach Bridge mixed in with the Grays and Blues.

Bull Drum – we have written several citations this week on these big boys.  Anglers fishing close to the Neuse, Pamlico, Adams Creek, Oriental areas are hooking up these giants. We have plenty of Fresh Mullet, Chum and Menhaden Oil for bottom fishing. Those anglers who like to use artificial Blabber Mouth Poppers with ZMan Swimmers or DOA Swimbaits plus the DOA Combo can help your hook-up. We may have another few weeks for these big monsters so hurry and try your luck before they move to the ocean.

King Mackerel – this bite has improved greatly since the water has cleared up. Good places to try East Side of the Cape Lookout Shoals have been holding good numbers. North West Places is seeing a few, along with the AR Reefs. Also, the Shipping Channel has had a sufficient bite. Mac A Hoos or Blue Water Candy Dead Bait Rigs with Dead Cigar Minnows has been working good plus live Menhaden will produce a bite.  We have a good supply of rigs and plenty of Cigar Minnows in 5# and 3# for the holiday weekend. Last weekend, we weighed several in the 30# and 40# range so with this weekend’s weather we expect there will be fish coming to the scales.

It’s getting really close to the fall run for the piers and surf.  Just this week, the surf anglers have caught Spanish and Blues casting Spanish Candy Jigs or metal lures around the Fort Macon Rock Jetty.  Anglers always can try the deep hole at the Coast Guard Fence for Flounder at times that’s a real good place.  There’s also been some drum in the surf this week anglers are fishing with Fresh Mullet. You can depend on Sharks, Blues, Pompano, Spot, Croakers to be in the Surf this time of the year.  There should be a good bite this weekend with the winds for tomorrow 5 to 10.

The Oceanana Pier reported Spanish and Blues off the end with some good-sized Drum coming through at times. As usual Croakers, Spot, Sheepshead, maybe a Flounder closer in on the pier.  The Beaufort Pier produces about the same fish.

We have Fresh Shrimp, Fresh Mullet, Bloodworms and all the frozen bait Squid, Finger Mullet, Cut Mullet, Sand Fleas, Menhaden and all the tackle you need.

For the crabbers, we have all the crabbing supplies you need and chicken necks for bait.

The Wahoo bite is beginning to heat up around the Big Rock area. Some have actually been caught King Mackerel fishing.  We have plenty Cow Bells, Drone Spoons, Ballyhoo Rigs, Planer Rod Combos ready and a fresh shipment of Baitmaster Ballyhoo in Small and Medium.   You may also hook-up Black Fin, possibly a Dolphin and Sailfish.

Bottom fishing has been really good. We have weighed a lot of very nice Triggers this week, Grouper bite continues to be good. We do have plenty of Squid Wings, Sardines and Boston Mackerel for the bottom fisherman.