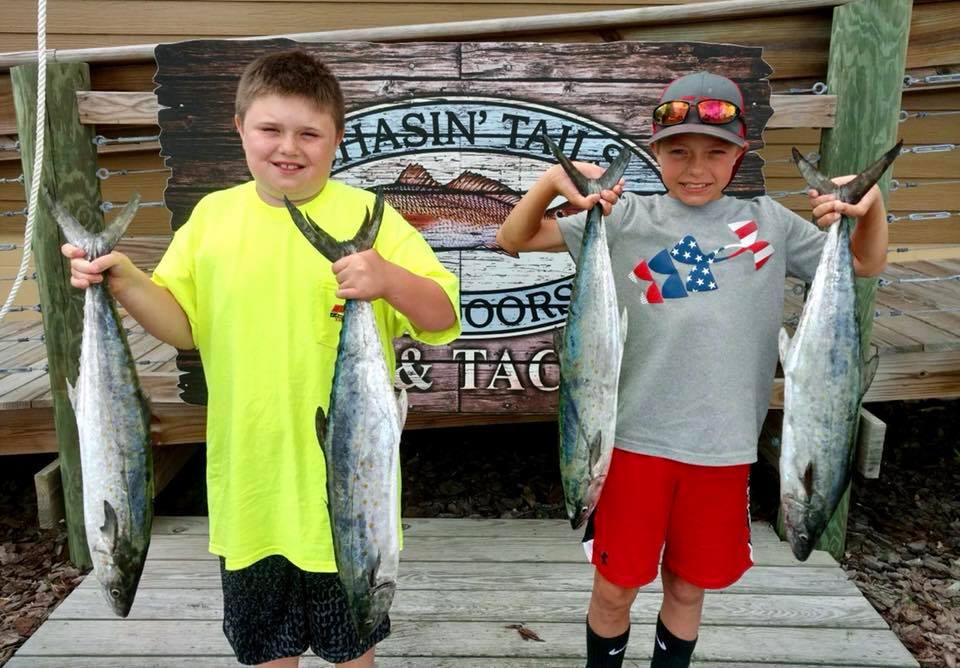 Hard to believe; we’re getting ready to go into 4th of July week, summer needs to slow down seems like it’s flying by. It does look like we have some good weather coming our way going into the holiday weekend and next week. Starting Saturday looks like 5-10mph right on into the week of the 4th right on to next weekend and not to mention the “FISHING” has been pretty good over the last week.

Spanish fishing has been very steady the last few days, seeing good action right outside the inlet down toward the Oceanana Pier in 30ft of water. Also, there’s still good action up toward the Cape Lookout area inside the Hook and along the Shoals. The larger fish in the 5lb range or larger have been hanging around AR315 and AR285 in very good numbers, seems like more than we’ve seen in the last few years. We have been weighing nice Spanish every day the weather is good enough for anglers to get out on the water. Trolling Bowed-Up Spoons, Clarkspoons, Spanish Busters and Mackerel Trees all have been working very well. For the larger fish trolling live bait and dead cigar minnows on the Mac a Hoos have been working well. Also, some anglers have been having good luck just casting to the schools of fish feeding around the inlet area on the Heavy Glass Minnow Jigs and Spanish Candy Jigs we have in the shop. There’s nothing like catching a 3lb Spanish on light tackle spinning gear.

Also, this week we’ve still been seeing the big Chopper Bluefish in the area, usually these fish are long gone once we get into the summer. But Wildcat Barnes from the shop caught several at the Port Wall this week, also I’ve been getting reports of schools still hanging out on the Cape Lookout Shouls. Along with the Chopper Blues, we are seeing plenty of the smaller ones mixed in with the Spanish along the beaches and inlets. Some of our yesterday trips even saw some small Jacks and Bonito mixed in with the Blues and Mackerel.

Lots of people think all the Cobia are gone but Wildcat Barnes has caught two keepers bottom fishing around the Turning Basin area this week, even lost a few. So, there’s still a few around to catch, but mostly they will be on the inside now if you’re going to find them.

We’re still seeing plenty of Snake Kings along the beaches, most have been hanging around the reefs. Atlas Tanker area over on the East Side has been holding some good numbers of fish too. Most of the fish have been in the 10-15lb range no real monsters but a few larger fish mixed in from time to time. AR 315 just off the beach has been holding a few fish, as anglers have been picking them up trolling for Spanish. Can’t wait to see what later in the year is going to be with all the Kings we’re seeing now, usually it don’t get really good until September going into the fall.

Sheepshead fishing has been doing very well over the last two weeks. We’ve been weighing quite a few nice fish in being a lot of anglers have been fishing for them since the winds were up last weekend. Places to try will be around the area bridges they all are holding fish, it really doesn’t matter which one. Also, the Port Wall has been good but they have been keeping anglers away since a lot of ships have been in the port this summer, so that area can be hit or miss. Don’t pass up the docks, you can catch good numbers and some big ones off docks in water as shallow as 3′. Live Sea Urchins and Live Fiddler Crabs is going to be the best choice for bait and we do have both in-stock at the shop ready for action. Also, the Coco Crab has been working, craziest thing I’ve ever seen. I’ve seen a lot of companies try to come up with an artificial crab that works and nothing ever seems to work. But the little CoCo Crab looks so real I guess the fish just can’t determine if it’s not a real crab. Plain and simple, they have been catching fish in our area.

Redfish and Speckled Trout fishing has been decent this week, seems like now we’re starting to see more and more fish show up. From what our Charter Fleet has caught this week, most of the fish have been around the Haystacks, Core Creek and fishing Docks in the area. Live Shrimp and Minnows seems to be working the best in the marsh areas, Topwater Lures, Spinner Baits, Gulps, Z-Man Lures, Spoons all have been working well too.

I’ve been seeing some really good Flounder fishing going on this week, the hot bait has been jigging a Spro 2oz White and Glow Bucktails tipped with a 4” Berkley Gulp White Shrimp; the only way to go.  AR 315, 320 and 330 are all holding Flounder and any other structure you might run across in the ocean.  Inside waters have been the Creeks, Port Wall, Docks and drifting behind Shackleford Banks all are producing a few fish.  Live Mud Minnows fished on Flounder Rigs seems to be working the best in the backwaters. Trout Man from the shop fished a few days last week he was telling me that fish are now just getting around the Port Wall, he caught a few nice keepers this past week.

Again, like last week the Sharks are still plentiful out behind the shrimp boats when they are working, there’s been a lot of wind so the boats aren’t always there. But when they are out there it’s game on, probably the easiest fishing you can do because there’s lots to catch plus great action. They will just about eat anything you put in the water, well I say anything you put in the water they will hit. If you’re going to fish behind these boats just keep in mind they are working so keep your distance.

Spanish and Blues are being caught off the end of the piers on plugs. Gotcha-Plugs, Spanish Candy and Katsmasters all are working well. Starting see some Flounder moving in along the surf, most have been on the smaller side but a few keepers mixed in. We’re now starting to see Sheepshead hanging around the pilings on the piers and around the Fort Macon Rocks. Live Fiddler Crabs and Live Sea Urchins are the best bait to be using for them, also I bet the CoCo Crab would work.

Well, as we all know last weekend the winds blew a gale keeping most of the boats tied to the dock, again most of this week has also been just too windy. But after today, things are setting up good for the Offshore forecast, what we are seeing right now is 5-10 mph this weekend right on through next week. North West Places, Big 10/Little 10, Atlas Tanker, 1700 Rock, 90ft Drop, 14 Buoy and the Big Rock area all can be holding Dolphin right now. For the boats that have been fishing Offshore still have been seeing a few Wahoo and Tuna in the mix. Also, seeing a few Sailfish move in the area close to catch, heard some being caught at the North West Places. As far as lures the Monk A Lure has been the hottest lure over the last few weeks, we only get a limited supply each week and within 24 hours they are GONE. We’re scheduled to receive another shipment tomorrow sometime to have for the weekend, Sea Witches rigged with Ballyhoo also has been working well. We have some new chains in the shop called the Mahi Magnet’s and Mahi Bandits that have been working very well. It’s a small chain, rigged with a small lure on the back with a hook so they are pretty effective this time of the year for the smaller Dolphin.

The bottom fishing has been great over the last few weeks in the 30 to 35-mile range. Most are catching Trigger Fish, Black Sea Bass, Grouper, Ring Tails and Amber Jacks using Cigar Minnows, Squid, Sardines, Mackerel or Menhaden for the bottom fish. Again, we have been seeing some of the largest Groupers we have seen in years this season so far. With the weather forecast coming up I’m sure there will be plenty of bottom feeders caught over the next week.