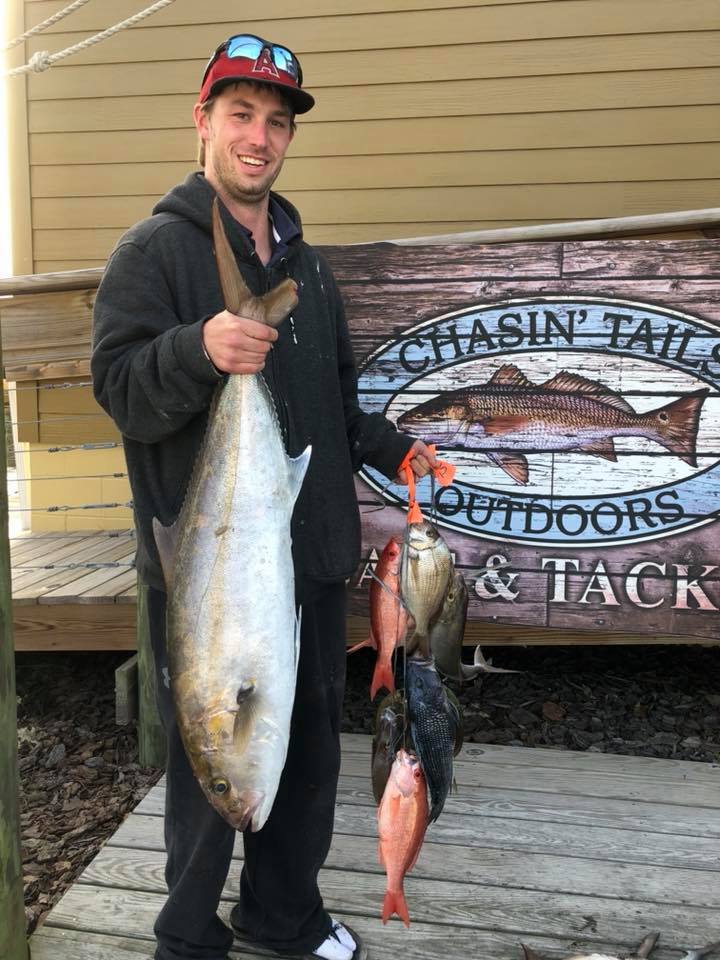 We just can’t get a break with the weather, this week we saw temps close to 70 now back into the 30’s at night. This has to be the craziest March I can remember in a long time; old man winter will just not let go. But, I guess it could be worse like the people up north getting Nor’easter after Nor’easter bringing record amounts of snow. At least, we are having a few good days here and there to get out and catch some fish. It’s finally looking like next week we could see a steady warmer weather pattern starting, so just maybe spring will be here to stay. What we’re seeing after next Tuesday, the temps are going to be in the 60’s for 10 days straight, so if that holds true the water temps will be on the rise and get more fish on the move toward us.

This week, we have seen some Redfish action in the backwaters, just had a customer send me a message about how he’s been finding nice schools of fish holding up in some of the local creeks as the cold weather has them back bunched up in tight schools. Also, we’ve seen some action out around Cape Lookout on the point and a few being caught around the rock jetty. If the winds lay down for Saturday that might be a good time to go look for the Old Drum on out off the point. There should be some around being this time last year anglers were having very good luck catching them, but the weather was a lot better.

Some of our trout customers that have still been fishing for the sport of it are still having some good action on up toward the Neuse River. Robert, from the shop did find a creek last weekend that was holding some nice Speckled Trout close to Morehead so there’s a few around to catch. Most anglers fishing for the trout are having the best luck on 17MR Mirrloures in some of our custom colors here in the shop.

I didn’t hear of or see any Bluefish this week, but I did get good reports back from some of the boats that went Offshore bottom fishing saying some of the wrecks and reefs just off the Cape were loaded with them. So, that means once this weather breaks next week and the water starts to warm back up, they will be moving right to us.

All of the piers are now open, but as far as fishing it’s been pretty slow so far. About all the anglers have been seeing is a few Black Drum, Red Drum and Sand Sharks off the bottom using bait shrimp. A few surf guys have been picking up some Speckled Trout and Red Drum over at the Radio island beach at times but it’s been very hit or miss. It won’t be long when we’ll begin to see a steady run of bottom fish and Bluefish; we hope.

A few boats did make it out last weekend but fishing was a little on the slow side, some boats went as far as 80 miles south to find warmer pockets of water. There was a few Wahoo and Blackfin caught but we haven’t had that big push of Hoos come up yet, but if the weather pattern holds for next week with the warming trend coming it won’t take long they’ll be right where they are supposed to be: around the Swansboro Hole and the Rise. Also, a few customers went out to the bottom fishing grounds catching Sea Bass, Snappers and Trigger Fish. Most all the boats were reporting of seeing nice catches of Grouper but they had to be released because of the season being closed.

Wish we had more to report but it’s what it is right now, we just need that water temp to start rising again so the fish can get back to their springtime patterns. We are so ready, it’s been a long winter around the shop so that has given us plenty of time to get ready for the season, we have more stock than we have ever had to help you catch more fish. Come check the shop out!