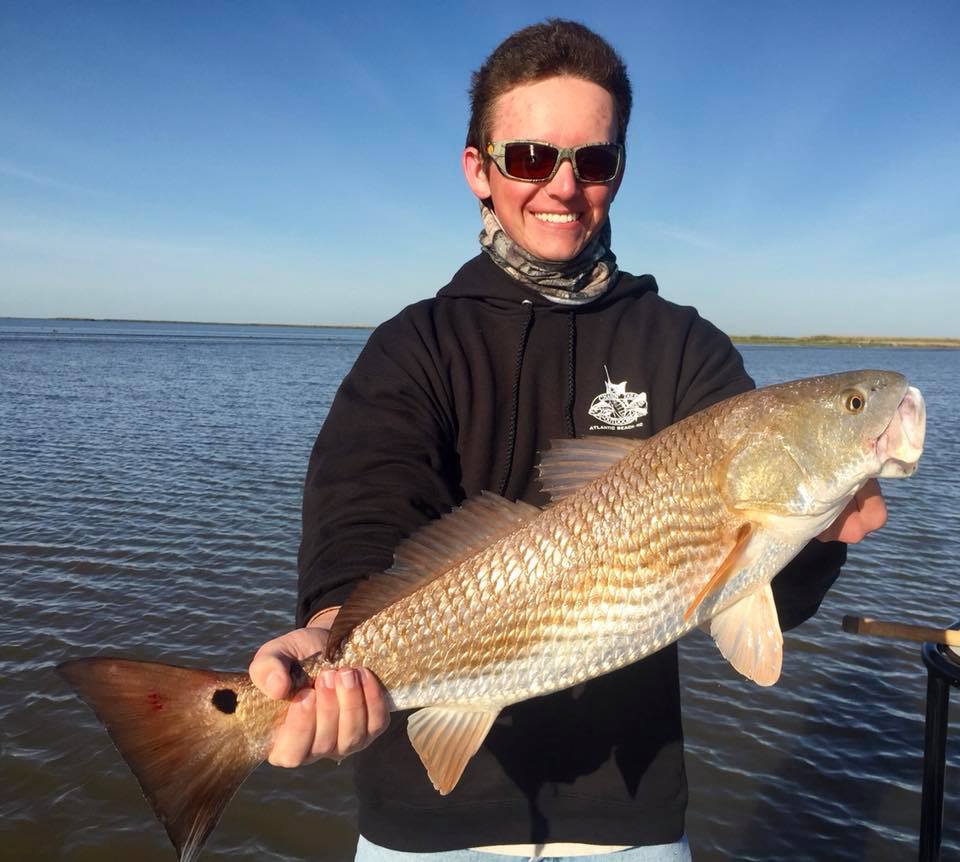 We’re starting to see some good signs in the area, last week one of Charter boats had a trip. They caught Gray Trout, Black Sea Bass and a few Bluefish just off Cape Lookout. I just talked with a customer today that was telling me before the wind kicked up he was catching Bluefish, Gray Trout and Speckled Trout in the sound. Part of our crew was out fishing the other day and a found a creek that was loaded with Redfish and nice Speckled Trout and even caught a keeper Flounder throwing Z-Man Paddle Tails. So, for sure the fish are on the move as the water temps start to come up, we just need decent weather for anglers to get out on the water. We also have seen some Red Drum and some nice Speckled Trout being caught this week off the beach at Cape Lookout and some of the trout were very nice sized.

I’ve not seen or heard of any Sea Mullets yet, but with first signs of Gray Trout showing up they won’t be far behind. I’m thinking once we get some stable weather for a few days in a row, someone will come across some mullet. Still some Redfish being caught on some of the flats and creek areas, again when the weather allows. Some anglers even starting to report good catches of Speckled Trout so that’s a great sign coming off the hard winter. Wish we had more to report but I want to keep it real. I’ve just not seen much over this past week, but once again when the weather breaks, I’ve got a good feeling; things are going to start happening pretty quick.

Bogue Inlet Pier is now open for the season, not heard a date on the Oceanana Pier yet but it’s usually right before Easter. About the only thing we’ve been seeing going on is a few Red Drum being caught over at Radio Island access and some at Fort Macon from time to time. Now, we are seeing some nice fish being caught off the beach at Cape Lookout but that takes some kind of boat transportation to get over there to access the beaches. We are for sure on that verge of seeing more and more action along the Surf Zone. It won’t be long now before the Sea Mullet run and first Bluefish to show up along the beaches.

Happy to report we did see some Wahoo and Black Fin Tuna come to the docks last week, not seen anything since just because of the winds no boats have made it back out. Now, the fishing was not hot and heavy but some boats came back with fish, most boats had like only one Wahoo and a Tuna or two. I did talk to some of our friends south of us down in the Wilmington area and they really smoke the Wahoo last week, they were seeing some big fish and brought limits back to the docks. So, it won’t be long when the Swansboro Hole and the Rise will be producing plenty of fish. I’d say over the next few weeks toward the end of the month we’ll start to see limits of Hoo’s coming back to the docks.

We just received our fresh caught winter Ballyhoo order this week and they are beautiful baits from our friends at Baitmaster, so we’ll have plenty on hand when the bite turns on. Also, we have been stocking the Wahoo section over the last few weeks getting ready for the season.