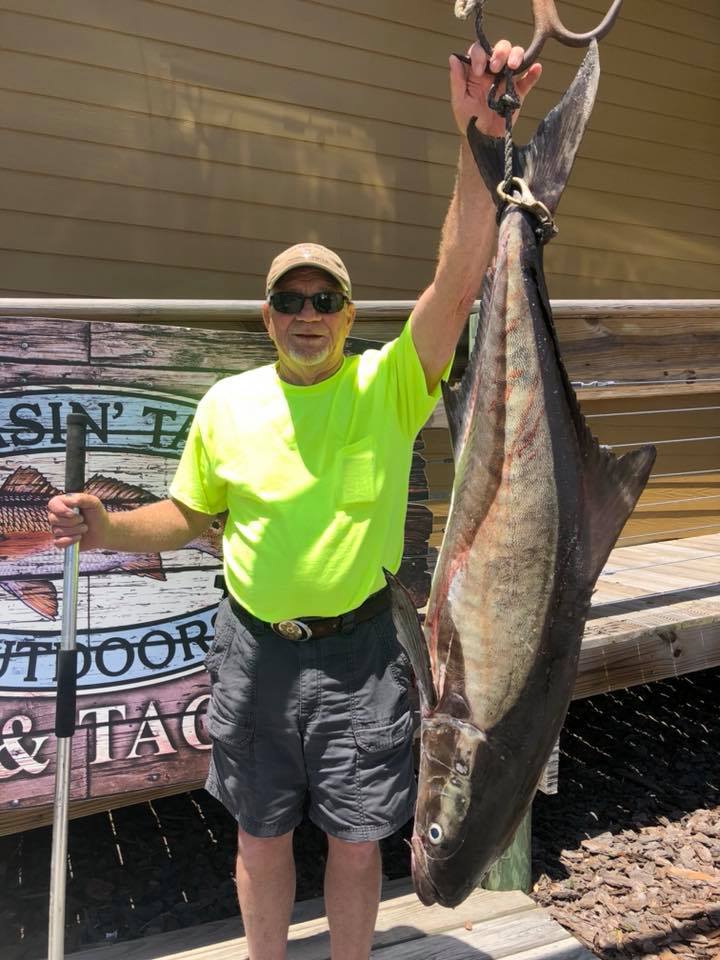 The wait is over we have finally started to see some good waves of Cobia this week, with weighing fish every day. Some boats reporting up to 8 fish a day and seeing over 30 or more the last two days. Most of that action has been sight fishing along the beach front up toward Cape Lookout area, but we’ve seen fish also to the west down toward Bogue Inlet. We have weighed some big fish also this week with one being close to 80lbs and a few more 70lb fish, those fish have been caught at Cape Lookout bottom fishing using dead menhaden. We should see waves of fish for the next few weeks since we’re now seeing good numbers off our beaches. The sight fishing guys have been having good luck on Sea Striker Bug Eye Bucktails and Bowed Up Bucktails, also Live Eels have been playing a huge role in getting fish to bite when they turn down the bucktails. We are currently out of Eels but have more on the way this evening, so should be good come tomorrow morning and into the weekend for the “HOT” bite going on. We also have dead fresh caught Menhaden and Chum ready for the bottom fishing anglers. So, the time is here if you’ve been waiting on the Cobia; the fish are here!  Who knows how long they’ll stay so don’t wait get out and catch some fish. You still have time to enter the Cobia Shootout, we still have 3 more weeks of fishing left and what we’re seeing now the next 3 weeks will be the peak of the season.

Spanish fishing this week has been a little slower than last week with the winds we had last weekend but the water’s getting right again to start seeing fish outside the Beaufort Inlet. Casting the heavy glass minnow jigs we have in the shop and a new lure we got last week the “Spanish Candy Jigs” both are working very well. The anglers trolling also have been picking up nice fish along the beaches and along the Cape Lookout Shoals. The custom Bowed–up Spoons, Clarkspoons, Squid Chains and Mackerel Trees all have been working well. Right now, these fish are grouped up and feeding like crazy! This will be some of the best action we’ll see all year until the fall rolls around and the water starts to cool back down. Plenty of Bluefish also to catch, they will be hanging in the same areas as the Mackerel. Still this week we have been seeing some Chopper Bluefish in the mix, so they aren’t all gone yet.

Last weekend, even with the rough seas we saw great Bonito action out around AR315 and along the beaches, more than we have seen all season, talked to one boat that had 30 or more. Most were catching them trolling Yo-Zuri DD’s and some anglers were having good luck trolling the colored Bowed-up Spoons. So, you still should be able to find a few this weekend before they move on.

A few anglers have been to the AR Reefs jigging for Flounder over the past week and have been bringing back a few fish. I’ve not seen any real coolers full but seems to be easy to get a limit if you work at it, jigging Spro 2oz Bucktails in White tipped with Gulp 4” White Shrimp is the only way to go. Again, anglers were having a time with the winds making it hard to get to the fish.  I can report a few fish have moved into the inside, Live Mud Minnows seem to be working the best in the backwaters along with 4” Gulp baits fished on a Jig Head.

We now have a good stock of Live Sea Urchins and Live Fiddler Crabs in-stock, we will keep them now until it gets too cold in the fall. So, if you’re looking for Sheepshead bait we have you covered. The Sheepshead have been biting, I wouldn’t say hot and heavy yet but I did see a few nice catches from the Harker’s Island Bridge this week and few starting to be caught around the AB and Beaufort Bridges, not heard much from the Port Wall yet but I’m sure there’s some hanging around there.

It’s been a little slow on the Redfish action around our area, but I’m starting to hear about some fish that have now came inside. Core Creek and the Haystacks have been the best areas to fish other than that can’t report much being most anglers are keeping tight lip because of the $15K that’s on the line next weekend.

Don’t forget, we have our Star Rods Carolina Redfish Elite Event coming up, June1st– 2nd, these elite teams will be fishing for a $15,000 1st Place Purse so make sure you mark your calendar to attend the weigh in at 3pm on each day. Weigh in will be held at the Big Rock Landing on the Morehead City Water Front so make sure you come out and check out the festivities and have a chance to be on TV as this event will be filmed by the “Chasin Creation” film crew.

Starting to hear of some anglers catching Spanish off Fort Macon casting the glass minnow heavy jigs. The pier anglers also are seeing some action, from the Spanish and Blue Fish plugging Got-Cha Plugs. Also, you can catch Bluefish in the mix with the Spanish using same lures or switch to using cut mullet and finger mullet on bluefish rigs will always get the job done.

Last weekend kept most of the boats tied to the docks but a few ventured out and still caught Dolphin in the almost too rough to fish conditions. Now the last two days the fishing has got right back to the epic Dolphin bite we were seeing the week before. I talked to a few mates last night in the shop that put over 30 Gaffers in the boat yesterday and with the weather forecast for tomorrow fishing should be about good as it gets. Most of the action has been from the 90ft Drop out toward the Big Rock but some boats are still fishing south down toward The Rise