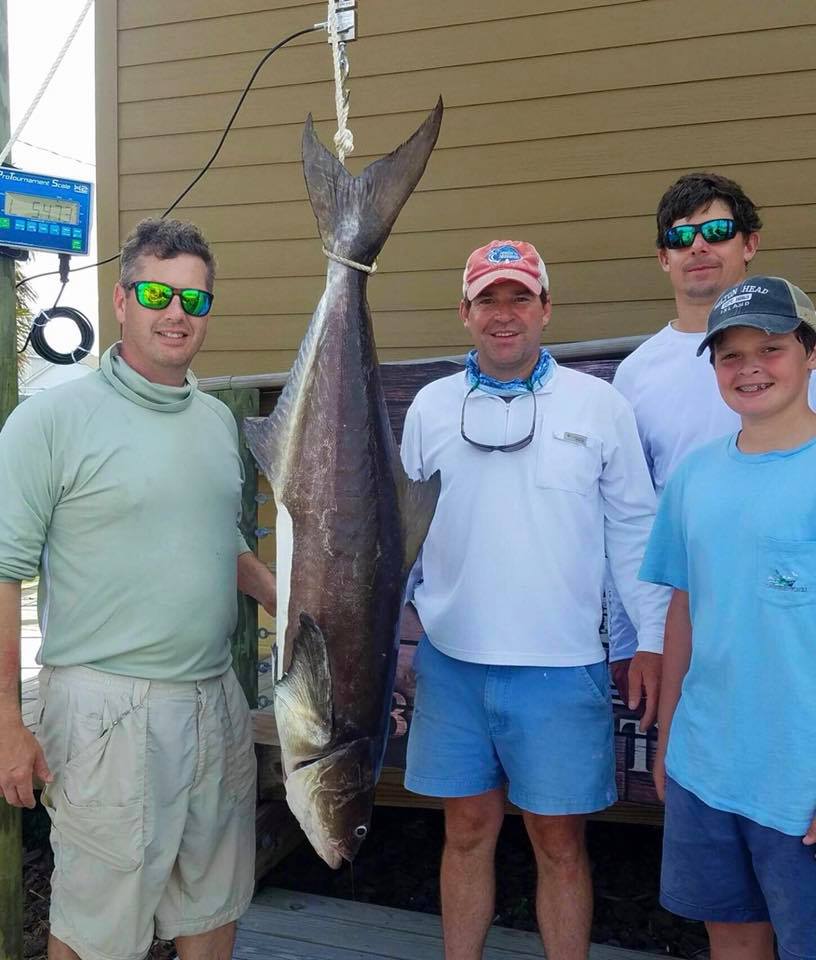 Spanish fishing’s been back on “FIRE” the last two days, all of our charters have been having no problem catching limits of fish. Most of the action has been up at Cape Lookout again, seems the bite has slowed down a bit around the Oceanana Pier but I have a feeling from what we’ve seen the last couple of days that area is going to turn back on anytime. Just this morning at AR315 they were schooling like crazy making them easy targets to catch. Some of the larger fish have also shown up, yesterday we weighed 4 or 5 fish over the 5lb mark with one over 7lbs, most were caught around the Cape Lookout area and some off the AR reefs. Trolling local made Bowed-Up Spoons, Clarkspoons on # Planers have been working well for the trolling anglers. Also, casting for these fish has been great, Spanish Candy and heavy glass minnow jigs we have in the shop have been working the best; been working so well it’s been hard to keep them on the peg, nothing like catching a 4lb Mackerel on light gear. Along with Spanish, we’ve been seeing some nice Bluefish in the mix in the 2 to 3lb range, catching them on the same lures as the Spanish. I talked to a customer yesterday who saw some schools of Chopper Bluefish on the Shouls at the Cape, said most of them looked to be hanging right in the white water, so they are still around to catch.

Mixed in with the Spanish, we’ve starting seeing our first signs of Snake King Mackerel; so be careful cause these can look just like a big Spanish. You really have to look at their lateral lines to make sure what you have caught before you keep them. Most are being caught on the same lures as the Spanish, but a few anglers have been catching some on dead bait rigs with Cigar Minnows. I’ve not really heard of anyone that’s been out Live Baiting the larger fish yet but it won’t be long as the King Tournaments are getting ready to kick off next month.

I’ve been getting a lot of calls about Cobia… are they still here, well I think it’s safe to say YES. We weighed 5 fish yesterday and a couple Tuesday with a few over the 60lb mark. Last week, was some great fishing for them, but slowed a bit when the weekend rolled around but also there were a ton of boats running around which isn’t too good for Cobia fishing. Yesterday, the fish were caught at Cape Lookout, on the inside of the inlet and I heard of a few south of us with some fish still moving up the coast that’s not even reached us. What we saw yesterday most of the fish were caught bottom fishing with dead menhaden, but a few were caught sight fishing along the beaches. We do have plenty of bait in-stock for the weekend, Fresh Caught Menhaden, Chum and still have some Live Eels. We usually have the Cobia in the area until mid to late June so the chance of catching one of these beasts is far for over.

Flounder fishing is turning on now at the AR reefs, seen some really nice catches this past week. AR315, AR320 and AR285 all seem to be holding fish now. Jigging Spro 2oz in the White and Glow tipped with Berkley Gulp 4” White Shrimp still the go to lure to catch these fish off the reefs. Other bucktails might catch a few but just won’t out fish these bucktails, it’s simple they just work. Also, it’s not a bad idea to take some live minnows with you to put out on the bottom with a Carolina Rig while you are jigging the bucktails just adds another chance to catch a fish. We have seen a few fish being caught on the inside now so they are moving in but looks like the waves of the fish are now just showing up at the reefs.

Still some Bonito around the AR315, anglers trolling around that area have been picking up fish over the last week. We also saw some in the mix with the Spanish while running some trips around Cape Lookout these last few days. Trolling Yo-Zuri DD’s seem to be working the best, but you can catch them casting small jigs if you find them schooling on top. Also, the colored Bowed-up Spoons have been working on the fish, the pink and chart spoons seem to be catching the most.

A few anglers have been catching some Redfish and Trout in the marsh areas, the most action I’ve heard of has been around the Haystacks area and Core Creek area. Starting to see some keeper trout show up in the Core Creek area, did a release citation for a customer the other day that was caught in that area.

As far as, the Redfish most of the anglers have been very tight lipped, with our Star Rod Carolina Redfish Elite Event starting tomorrow they haven’t been wanting to give up any locations with 15K on the line. Don’t forget, we have our Star Rods Carolina Redfish Elite Event coming up, June1st– 2nd, these Elite teams will be fishing for a $15,000 1stPlace Purse so make sure you mark your calendar to attend the weigh in at 3pm on each day. Weigh in will be held at the Big Rock Landing on the Morehead City Water Front so make sure you come out and check out the festivities and have a chance to be on TV as this event will be filmed by the “Chasin Creation” film crew.

Anglers are starting to see a few Sheepshead showing up but over the last week we haven’t weighed any huge fish, from what I’m hearing most of the larger fish are still out in the ocean at the reefs. It’s look like they haven’t quite pushed inside the inlet yet. Now, we have been seeing good numbers of 3 to 4lb fish around the bridges and some being caught around the Port area. We have Live Fiddler Crabs and Live Sea Urchins in-stock now for the summer.

The best action has been the Spanish and Bluefish off the Piers and along Fort Macon Park, last weekend anglers were catching them like crazy off the Oceanana Pier on Got-Cha Plugs. Last few days it’s been a bit slower than we saw last weekend but fish are still being caught. Seems like the fish have been more north this week, but they could move back in that area any day, so if you like to plug fish from the pier now’s the time.

For the surf anglers: we are still seeing some Bluefish along the beach that can be caught on Finger Mullet and Cut Mullet fishing with mullet rigs.

As far a bottom fishing we’re now getting into that summertime pattern of mixed bag of fish from Sea Mullets, Hog Fish, Spot, Drum, Sharks, Pompano, Skates, Croakers and a few Flounder. Bottom fishing with Bait Shrimp, Squid, Bloodworms and Mullet will find you some action. Also, Live Minnows if you would like to have a chance trying for a Flounder.

It’s getting that time of the year when we start seeing some Dolphin closer to the beach, 14 Buoys to the 90ft Drop seems to be the best places holding fish.  Also, we’ve seen some good catches around the Swansboro Hole and the Rise area but fish have been seen as close in at North West Places and Big Ten / Little Ten. Just keep in mind the closer you fish toward the beach you won’t run into huge numbers of fish so if you catch 4 or 5 that’s a good catch.

This is also the time of the year when we’ll see the largest Dolphin of the year, last weekend we weighed in a 60lb fish which is a trophy fish for our area that was caught on a Monkalure. Trolling Small and Medium Ballyhoo behind Sea Witches in the Blue/White and Pinks have been working well, along with C&H small lures without bait have been working well on the smaller Dolphin.

One of the best lures you can be pulling is a Monkalure this time of the year, when these fish start to spread out this lure is just easy to pull and flat out catches fish. We have them in the shop unrigged and rigged ready to go, we are one of the only shops that has this lure so come pick up some. I had one customer last weekend that came back in and was telling us that the Monkalure saved his trip, once he put them out that was the only thing the Dolphin would bite. Anglers are also catching some Wahoo and Tuna still in the mix with the Dolphin and few Billfish.

Bottom fishing still going well, we’ve been seeing some big Red Groupers in the area, most of them have been in the 30-40-mile range on the ledges around the 90ft Drop. Last weekend, we weighed in some huge Grouper, one that’s being reviewed right now for possibly a new state record. Also, there’s been some good fishing over on the East Side on some of the closer bottoms like Atlas Tanker, 17 Rock and AR285. Anglers are seeing Amber Jacks, Groupers, Sea Bass, Snappers and huge Sharks to catch too.