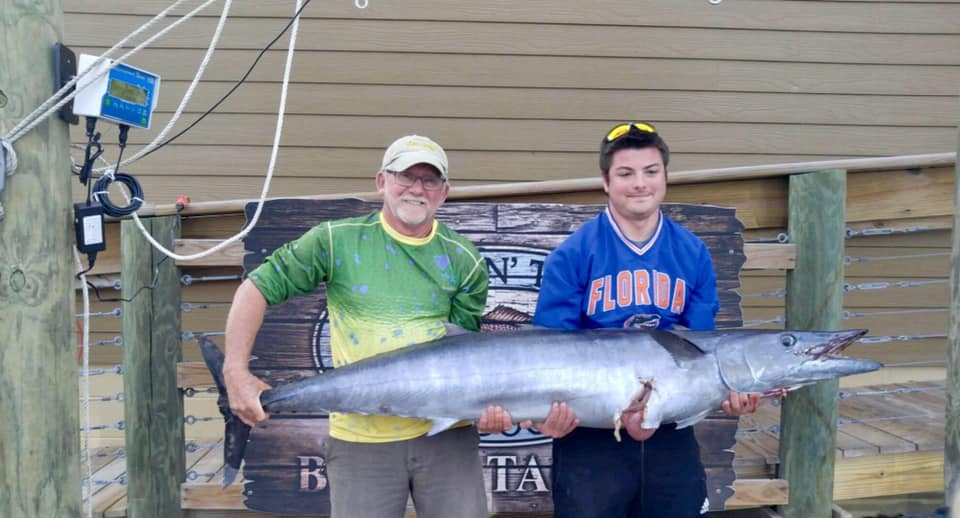 Here we are again, another roller coaster Friday with a system racing to the Northeast. Lucky for us the majority of the wind and rain will be late Friday night but we’ll have rain most of the afternoon with clearing skies Saturday morning. The weekend looks sunny with temps in the upper 60’s.

This time of the year a lot of fishermen look to come and enjoy the fall Spot run. Well, we can say it’s in full swing. We have seen many coolers this week with nice yellow bellies some anglers catching over 100. It seems you do have to scout around to locate them. We have heard some anglers have located them in Gallant’s Channel, around the Duke Marine Lab, near the new Beaufort High Rise Bridge all the way around to the corner of the Port Wall. But when you do, you better have fresh Live Bloodworms, Fresh Shrimp and Fishbites in your boat so you’re prepared to catch some fish. We have a fresh supply of Live Bloodworms not the mention Fresh Shrimp and all the Fishbites you’ll need. So, stop by for your bait before you hit the water. Also, you can fish from the bank over at the Beaufort Draw Bridge and the pier near Radio Island both of these areas are having good luck too.

The Red Drum bite has really been good this week in the creeks, Haystacks area and the Port area. Live Shrimp fished on a popping cork and fishing fresh Mullet has been the ticket. The Reds this fall so far have been plentiful and eager to bite.

Flounder fishing is just about as good as it gets right now, the inshore bite has been getting better with the cool fall temps. We heard this week there’s a lot of bait in the water and the Flatties are taking advantage of the bait in front of them. A good report came from Spooner’s Creek this week with plenty being caught. Anglers know the Flounder stack up around the Port Wall and Rail Road Bridge this time of the year and it’s been proven again this year. Plenty of nice fish are coming off the wall, just fish Live Finger Mullet on a Flounder Rig or either jig a 2oz Spro Bucktail with 4” Gulp White Shrimp to catch you a nice cooler of fish.

Speckled Trout has been getting better and better every day with the falling temperatures cooling the water down bringing these fish in. Anglers are reporting catching many small fish in the 13 ½” range but now are seeing numbers of keeper size fish. Live Shrimp, soft plastics like Z-Man, Billy Bay, DOA and Gulp plus mirrolures have been working very well.

Beginning to see some Sea Mullet show up since the water is finally clearing up from the storm. The Port area, Shipping Channel and Coast Guard Station seems to be the best areas to find the Mullets. Fresh Shrimp fished on Sam’s Gitters Bottom Rigs are the best combo to use.

There’s plenty of Blues inside and out to have fun catching.

We have weighed numerous Spanish over the last two weeks. Most have been farther out near the Cape area or near shore wrecks. We weighed 15 over 6lbs just this week. If the weathers allows it’s time to catch a Spanish of a lifetime. How about one 10 lbs; it went on the scales this week.

The King Mackerel bite has been on “FIRE” this week. Tuesday night it was King after King coming to the scales. Best areas to try are Dead Tree Hole, North West Places, Shipping Channel and any of the near shore reefs all are holding fish. Dead Cigar Minnows trolled on Blue Water Candy Dead Bait Rigs, Mac A Hoos, Pirate Plugs all are landing fish. Just last weekend during the NC Troopers Tournament fish were caught inside around the Port Wall. So, to say the least the bite is “HOT” right now.

If you’re into catching Albacore then hit the water. They are still thick from AR 315 to the Cape Lookout area. Stop by the shop and pick up some Spanish Candy Lures a hot item to fish for the Albe’s.

Oceanana Pier has had a good week with plenty of Blues and Spanish off the end probably more Blues than Spanish but for you pluggers still fish coming over the rail. Anglers are using Gotcha-Plugs and small metal lures to catch them.

One customer report today that plenty of nice Spots were being caught one after another. Fresh Bloodworms, Fresh Shrimp or Fishbites is the best way to catch these fish.

There’s Flounder being caught using Live Finger Mullet and Mud Minnows. We have plenty in stock for you to stop by before heading to the pier. Plus Red and Black Drum at times coming through.

Some Speckled Trout are beginning to show up also. It’s probably just around the corner when the trout will be on the beach in good quantities.

Surf – there’s been very nice Red Drum caught around the Fort Macon Rock Jetty using Fresh Mullet or Fresh Finger Mullet. Plenty of Flounder right in the suds using Live Finger Mullet or Live Shrimp. Don’t over throw when fishing for the Drum or Flounder. It might surprise you how close they come in when feeding on the bait that’s in the water.

Radio Island has been a good place to fish and will continue to get better and better. Tim (the Troutman) fished there Wednesday catching plenty of Speckled Trout, Blues and Flounder not even down at the rock jetty. Anglers have report catching a lot of Speckled Trout over at the jetty this week but many fish have been just a hair short of a keeper.

Wahoo bite remains steady from the Big Rock south toward the Swansboro Hole and the Rise. We did weigh a few Wahoo’s this week over 80 lbs. We have plenty of Baitmaster Ballyhoo in any size not to mention all the rigs and lures you need. There’s Black Fin and a handful of Mahi in the mix also.

Most of the anglers are focusing on the King Mackerel bite being October is the month of many tournaments.