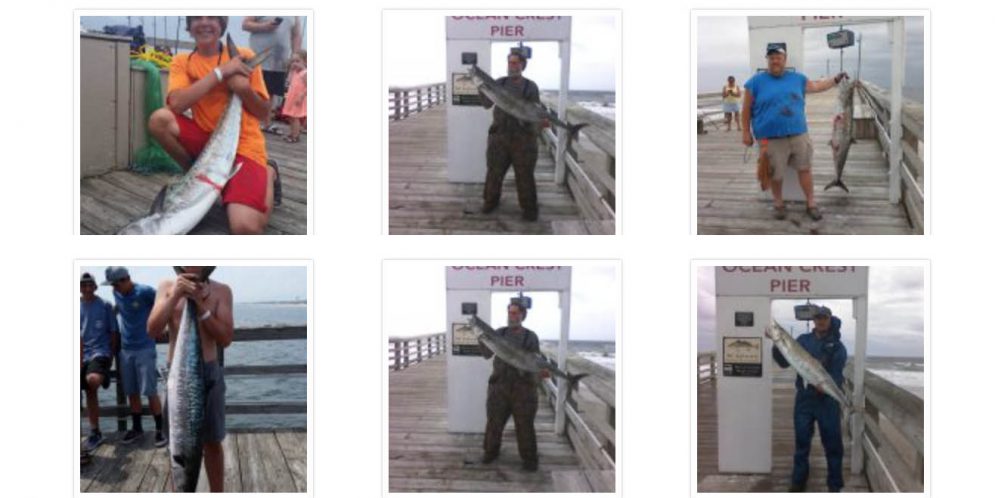 They’re Baaaack!  The run of spring kings along the southern N.C. coast often begins during April and it did again this year – barely.  Randy Robbins of James Island, S.C. was fishing from Oak Island Pier on Saturday, April 30, and kept watching a tide line creep closer to the pier.  The other king fishermen on the end of the pier began leaving in late afternoon, but Robbins was determined and decided to stick it out until dark if necessary.  It didn’t quite take until dark, but sometime after 7:00 P.M. a king flashed by the end of the pier and tried to make off with Robbins’ bluefish bait.

The king got hooks as well as the struggling bluefish and the battle was on.  After about 30 minutes, Robbins led the tiring king to the end of the pier and a waiting gaff.  It weighed 30.2 pounds and word spread along Oak Island quicker than ants find a picnic.

Sunday morning, May 1, the ends of both Oak Island Piers were lined with king fishermen and dozens of live baits circled them.  Two kings were landed on Sunday.  Jamie Balock scored with a 38.15 pounder from Ocean Crest Pier and 15 year old James Lutz, decked a 29.8 pound king at Oak Island Pier.  Balock’s king hit early Sunday afternoon, but Lutz had to wait several more hours as another tide line approached Oak Island Pier.  Several cobia were caught also, but all were barely shy of minimum size.

Monday was a teacher work day for Brunswick County Schools and Lutz was on Oak Island Pier bright and early.  Several hours later, he decked another king, this time at 35.4 pounds and collected the citation he barely missed Sunday afternoon.

Tuesday morning the king bite fired off first at Ocean Crest Pier, with John Mason landing a 38.2 pound smoker and Charles Miller adding another at 25.11 pounds.  Both of these kings were lying on ice by mid morning.

There were also kings landed over the weekend by fishermen in boats trolling near the beach.  The largest was a 47.60 pound brute caught by Charles Callahan of Laurinburg and weighed at the Ocean Isle Fishing Center.  Reports on Callahan’s fish place the catch somewhere between Oak Island and Sunset Beach.  The constant is that he caught it close to the beach on a lure while trolling smaller lures for Spanish mackerel.

The pier kings all hit live bluefish suspended from the piers on trolley rigs.

The Oak Island Piers are famous for their early runs of large king mackerel.  The king mackerel records for these piers, plus the record for the former Long Beach Pier, were all caught during the spring run and they reach or exceed 50 pounds.  The heaviest is Bo Crump’s 53 pound, 6 ounce king caught from Ocean Crest Pier on May 7, 1998.  Crump took a lunch break after catching that king and returned in the afternoon to add kings of 41 and 36 pounds to his catch.  Chuck Huthmacher holds the Oak Island Pier record at 50 pounds even.  His was the earliest of the big kings to be decked and he caught it on April 15, 2002.

Kathy Davis caught the record for the former Long Beach Pier on April 27, 1991.  It weighed 53 pounds and 3 ounces.  That record will never be broken with the pier now dismantled and million dollar houses where the pier house and parking lot were once located.  Davis’ king also holds the IGFA Women’s World Record for king mackerel caught on 16 pound class (8KG) line.  This record is 25 years old.

It appears the pier king bite has begun at the Oak Island piers and all are large, healthy fish, with several being very large.  This run usually spreads up the coast over the next several weeks to a month, but it’s happening now and Oak Island Pier and Ocean Crest Pier are the places to be.  Plan to arrive early to secure a position at the railing.  King fishing from these piers is popular enough that sometimes space runs out.