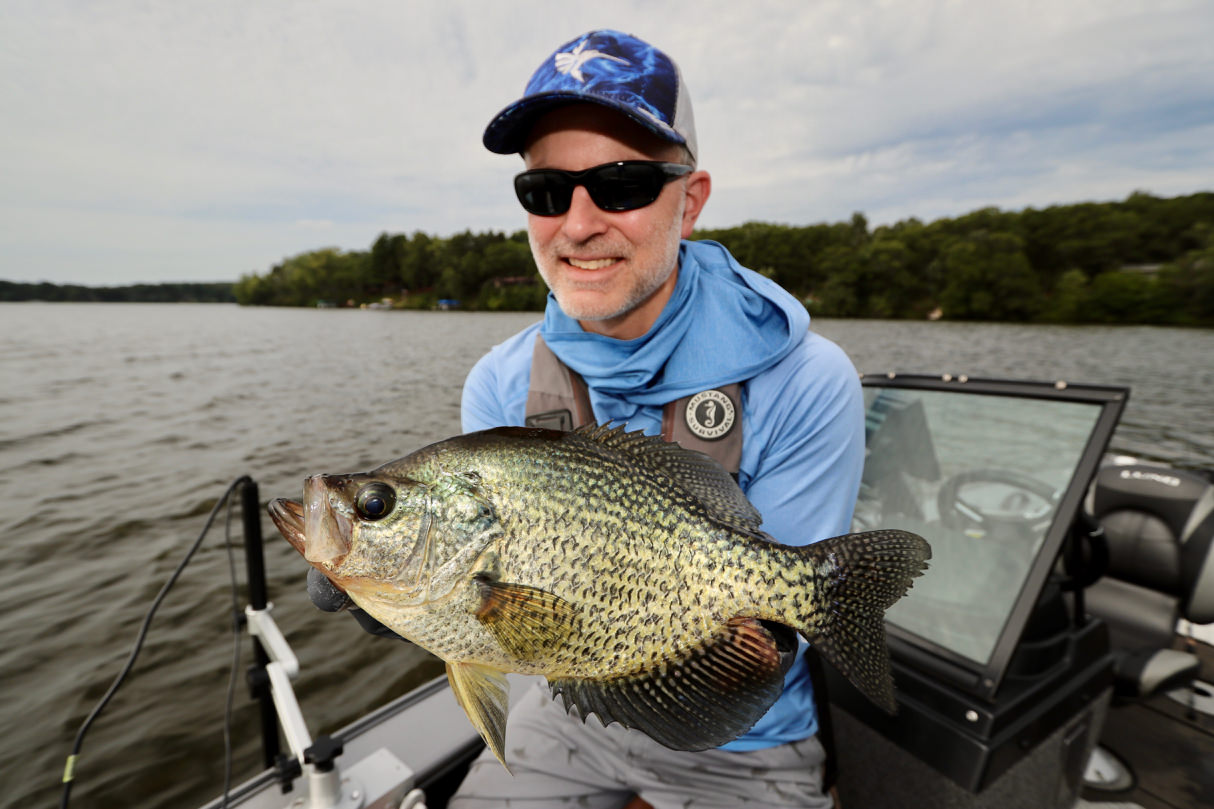 The angler’s calendar revolves around prime-time bites which, happily, occur for each species at different times of the year. When we think panfish – and crappies in particular – many anglers would likely point to the pre-spawn and spawning periods of the spring as being the best time to tangle with oversized slabs. It’s certainly true that many trophy-caliber papermouths find themselves in the net as the trees are leafing out – and for good reason. Biology has supercharged their aggressiveness at this time of the year, and the spawn has them concentrated in shallow, easily recognized areas. But for me, the best time to target crappies of gargantuan proportions is on the other end of summer, as school buses begin to prowl the cul-de-sacs once again. Yes, I love to chase giant crappies in the fall.

Shorter days and cooling water temperatures cause dramatic changes to aquatic ecosystems as summer pivots to fall. Among the most noticeable of these is a reduction in the volume of vegetation available in the shallows. As weeds die back, baitfish that had successfully evaded predators in the lush greenery all summer now find themselves vulnerable, causing them to school up and head to open water. Many weed-oriented fish, including giant crappies, follow this annual prey movement, ready to cash in on Nature’s sudden bounty. In fact, this is the first step in a progression that will draw large schools of crappies to the deep waters of main lake basins – or reservoir river channels – where they will spend the cold winter months.

Early in the fall period – as water temperatures fall into and through the 60s – look for magnum crappies to congregate near the first pieces of primary structure that is deeper than the dying weedline. This could be as simple as rockpile or an artificial fish crib in 12-20 feet of water. Remember also that crappies like vertical cover, so a sunken tree in that depth range can be a goldmine. Use your Side Imaging-equipped fishfinder to your advantage, to not only locate structure but also the crappies relating to it. Look for bright primary sonar returns with nearby dark sonar shadows – when you see a collection of 3-5 nice bright returns, it’s quite likely that you’re looking at a pack of big crappies. Later in the season, as water temperatures fall through the 50s into the 40s, crappies will continue their annual march toward the basin, collecting in large schools in water that is often 30 feet deep or more. Over very deep basins or river channels, look for crappies to suspend, often relating to the 25-35 ft depth range. At this time of year, traditional 2D sonar becomes the most important tool in your marine electronics toolbox, as you search for large collections of classic arch-shaped sonar returns.

Match your fall crappie presentations to the current water temperature. Early in the season, when water temperatures are still in the 60s, crappies will still respond very well to soft plastics presented on light jigs. I typically use a 1/16 oz jig tipped with a 1 ½ to 2” soft plastic – either tubes or minnow-profile baits – rigged in a 3’ leader of 8 lb test Seaguar InvizX that is coupled to 20 lb test Seaguar Smackdown in the Flash Green color pattern. A fluorocarbon leader is important – especially in cool, clear water – to maintain a stealthy approach at the bait; remember, crappies use those big eyes to find and capture prey, and a sumo crappie only grew that large by successfully avoiding lures that didn’t look right. The high-vis nature of the Smackdown braided line provides a big advantage, as you’ll be able to many bites occur before you ever feel anything unusual through the rod. A 7-foot, light action rod equipped with a 1000 series spinning reel is the perfect combo for pitching plastics to fall crappies.

As the leaves fall from the trees and the water continues to cool, supersized crappies often become less willing to chase plastics, but remain susceptible to a live minnow. A slip bobber is a great way to dangle a lively presentation above suspended fish – and above is the key. If fish are spotted on 2D sonar at a depth of 30 feet, set the depth of your bait three to five feet above them – closer if the water is dirty or stained, and farther in cold, clear water. Getting several crappies to move out of the school toward the bait is a great way to initiate competition and trigger strikes.