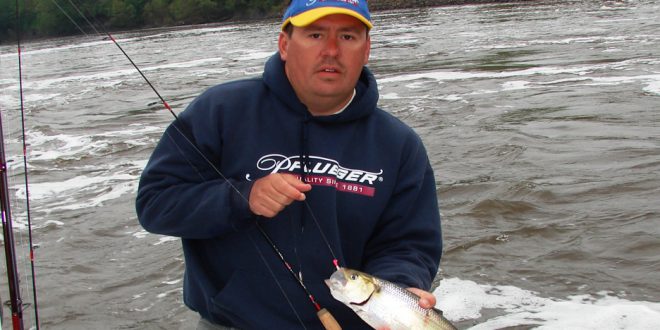 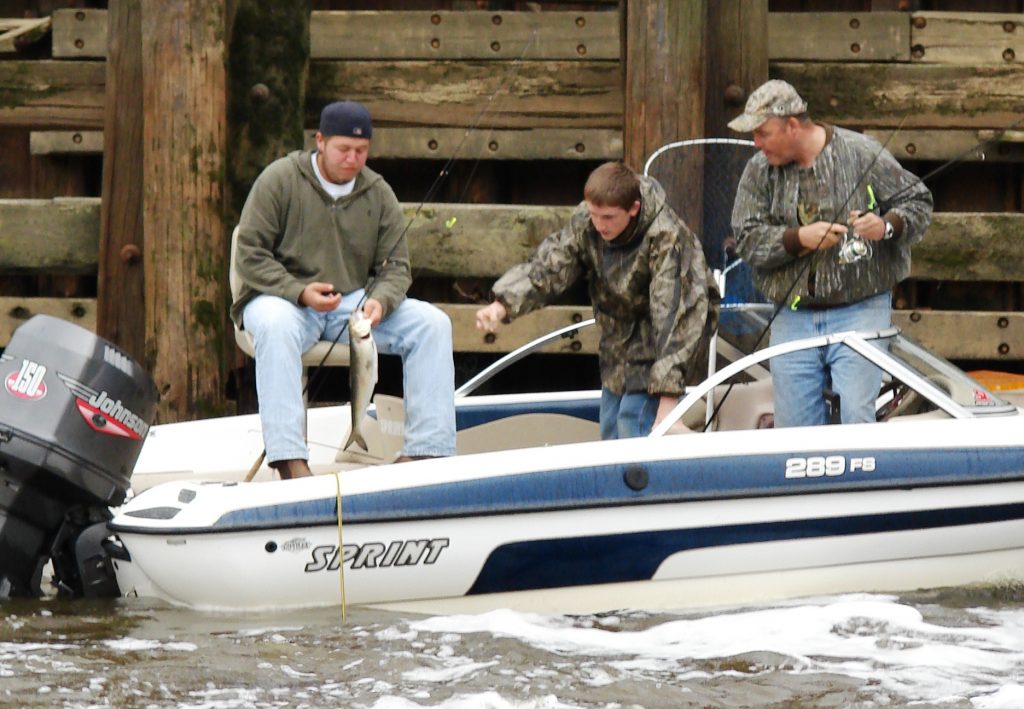 Shad are one of God’s gifts to fishermen each spring. They come in a couple of sizes and are found in most rivers in North Carolina and they visit rivers in other southeast Atlantic states as well. The best news about shad are just how much fun they can be to catch and how strong the run gets in places.

Fishermen in N.C. rivers catch two species of shad, hickory shad and American Shad. According to Wikipedia, shad are a subfamily of herrings that comprise about 30 species worldwide. They are pelagic (open water) schooling fish, of which many are anadromous or even landlocked. While American shad aren’t generally meat eaters, they eat small shrimp and fish while migrating to spawn and this makes them susceptible to fishermen. Hickory shad eat small fish and often pause their migration to feed. Both species are highly sought for recreational fishing.

Hickory shad range the East Coast of the U.S. from Florida to Maine. They are anadromous, which means they spend most of their life at sea, but return to freshwater rivers to spawn. Female hickory shad are larger than males, with both averaging around 14 to 16 inches. Hickory shad are smaller than American shad, but are very strong and fight well, often jumping to try to dislodge the hook. They have earned the nickname of “Poor Man’s Tarpon.”

American shad also range the East Coast and travel farther north to Newfoundland. They are also anadromous, which puts them squarely in the sights of hordes of fishermen as they swim upriver. American shad reach weights of 3 to 8 pounds. They are strong fighters, but are not as acrobatic as their smaller cousins, the hickory shad. 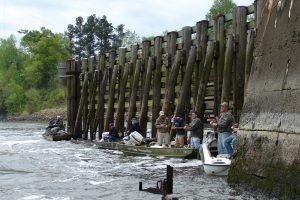 More folks keep American shad to eat. They can be prepared in just about any way and folks who like them say they have a mild flavor. In North Carolina, the females (roe shad) are more prized as their roe (eggs) are considered a delicacy. American shad are very high in omega 3, and in particular contain nearly twice as much per unit weight as wild salmon. They are also very low in toxins like PCBs, dioxins, and mercury.

Numerous locations on several N.C. rivers are considered hotspots for catching shad. Starting in southern N.C., the tail waters of Lock and Dam Number 1 on the Cape Fear River is a shad hole. Fishermen travel there from long distances once the word gets out the shad have arrived. Lock and Dam Number 1 is a U.S. Army Corps of Engineers facility and there is a launching ramp immediately beside the lower end of the lock.

This lock recently received some much needed maintenance and upgrades. There was a scour hole just below the dam that was filled and a new rock arch fish ladder was added to help fish cross the dam on their migration to their spawning grounds. At the same time a fishing pier was added a few hundred yards downriver from the dam. There was already a Corps of Engineers picnic area and a private campground is immediately adjacent.

Other shad hotspots for boaters are the many creek intersections off the Neuse River between New Bern and Kinston and in the Roanoke River from Jamesville to Weldon. A quick check in the boating section of the N.C. Wildlife Resources Commission website at www.ncwildlife.org will provide a list of Wildlife Commission launching ramps to access these and other waters. 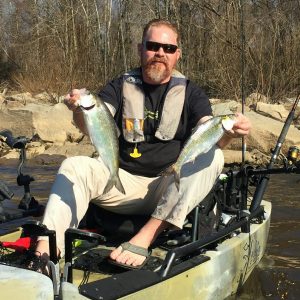 Two spots that are known as excellent shad fishing spots for fishermen without boats are along the banks of the Neuse River , beside U.S. 70, in Kinston and from the rocks adjacent to the Weldon Wildlife Ramp in the Roanoke River. There is a shad run in most N.C. rivers and there are definitely other locations with good reputations. Local tackle shops are always a good source of information.

Fishermen chase shad successfully with both spinning and fly fishing tackle. While heavier tackle will work, dedicated shad fishermen pride themselves on using ultralight and light tackle to allow hickory shad to run and jump and prevent horsing in the larger American shad. The most popular shad lures are small bucktail shad darts and shad spoons.

Nungesser (www.seastriker.com/nungesser), specializes in the small spoons and darts used to pursue shad. There are multiple colors and sizes and even “No-Alibi” rigs that use a dart positioned in front of a spoon on the same rig. These should be available at your favorite tackle shop located between U.S. 17 and I-95.

Another rig that began in the southern part of N.C., but is gaining in popularity with shad fishermen across the state is a tandem rig using small (1 or 2 inch) curly tail grubs on small jig heads. Several colors produce well, but chartreuse is the color every fisherman mentions.

Jonathan Grady of Yak’N Off Outdoors (910-818-0587) is a member of the Hobie Kayaks Fishing Team and one of his favorite kinds of fishing is catching shad on the Cape Fear River. He said the first shad have already arrived at Lock and Dam Number 1. Grady attributes the early arrival to the mild winter.

“The dam slows the shad down at its base and they gather for a while before moving on,” Grady said. “This congregates them and makes them easier to catch. They use the rock ladder to cross Lock and Dam Number 1, but Lock and Dam Number 2 and the William O. Huske Lock and Dam (Lock and Dam Number 3) are spillover dams and the shad rely on the lockmaster locking them through to continue upstream. Shad are later reaching these dams and may congregate longer due to the higher difficulty in getting by.”

Grady fishes for shad in the tailwaters below the dams. While casting his shad rig, he usually fishes a large bait on the bottom or has a lure positioned in the current near the bottom to catch the stripers and catfish that follow the shad upstream. Grady said to vary your weight, rod angle and retrieve speed until you find the sweet spot in the water column for shad that day and emphasized it will vary.

Fishermen on rivers with flood plains immediately beside the rivers say when the rivers are high and there is several feet of water in the flooded woods, the shad often move into the flooded area for protection and easier travel. They fish the same darts and spoons, but have to adjust weights and retrieve speed to prevent hang-ups.

Shad fishing is a lot of fun and it happens to some degree on almost every coastal river throughout N.C. and much of the Southeastern U.S. They are reliable too, heading up rivers farther south earlier in the season, then N.C. in March and April and on to Virginia later. Hickory shad run and jump and are often compared to miniature tarpon, while American shad are larger and stronger and more of a dogfight. Area tackle shops should be glad to set you up with the favorite lures for each area and once you get them to bite, you’ll be as hooked as the shad.