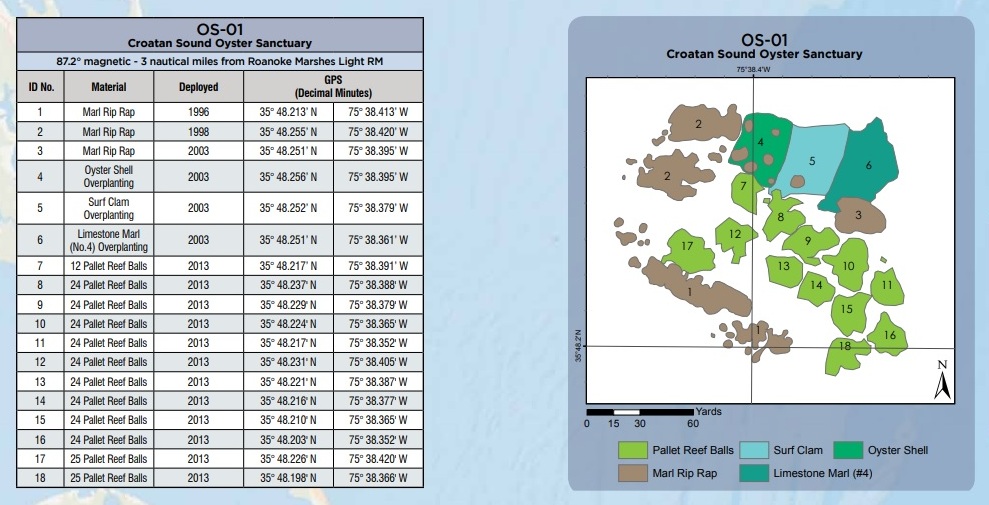 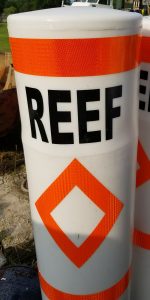 One of the current points of emphasis is estuarine reefs, especially oyster sanctuaries. These projects don’t just add habitat for fish, crabs and marine plants, but once oyster spat attach and begin growing, the oysters filter the water and a single 3 inch oyster can filter more than 30 gallons of water per day.
Most of these reefs are in water deep enough to easily traverse, but a 2017-2018 winter and spring project has been to mark the boundaries so boaters can avoid and fishermen easily locate the reefs. The buoys used to mark the estuarine reefs are white, with orange reflective striping and an orange diamond with the word reef above it. If the buoys mark an oyster sanctuary, that is also marked on the buoy.

One of the newest of these reefs is AR 491. This reef was completed during the fall of 2017 just offshore of Carolina Beach State Park in the Cape Fear River. AR 491 covers five acres of bottom and one acre was covered with 700 tons of small crushed concrete thanks to a partnership with the N.C. Coastal Federation. This was deployed on the northernmost section of the site to form a low relief hard bottom area.

Jason Peters of the DMF Artificial Reef Program, said they expect this site to gather oyster spat, grow oysters and recruit the fish that associate with them. Peters added that if AR 491 is successful in recruiting oysters, it will become a de-facto oyster sanctuary, as the Cape Fear River is closed to oyster harvest in that area.

There are numerous estuarine reefs and oyster sanctuaries in other parts of the state. The strong tidal currents of the Cape Fear River and smaller waters elsewhere in Brunswick County kept this area out of consideration for an estuarine reef for many years. AR 491 is a pilot program to see how the reef maintains its integrity and collects marine growth.

Estuarine reefs may be artificial reefs, oyster sanctuaries or combinations of the two. These reefs begin in the sounds behind the Outer Banks and, with the addition of AR 491 in the fall of 2017, now extend to Brunswick County, the southernmost N.C. coastal county. There are 21 estuarine reefs, with 14 serving as oyster sanctuaries and expectations AR 491 will develop into an oyster sanctuary in the near future.
Biologists monitor North Carolina’s artificial reefs for material stability, material durability, material performance, essential fish habitat and more. Information from these studies helps guide future enhancements.

(Courtesy of the NCDMF Website and Artificial Reef Guide)

The lists of materials and maps of these reefs, except AR 491, are available in the N.C. Division of Marine Fisheries Artificial Reef Guide and on the website at www.ncdmf.

North Carolina has one of the most active shellfish restoration efforts in the country. One of the largest programs in this effort is the Oyster Sanctuary Program. Oyster harvest is prohibited in oyster sanctuaries. These areas are protected to encourage the growth of large, healthy oyster populations that can act as a brood stock for the waters around them. Each oyster produces millions of eggs annually that are carried by currents and tides to surrounding areas. By developing and protecting this brood stock, the number of oysters in adjacent waters increases. In oyster sanctuaries, the Division of Marine Fisheries deploys material to build reefs and allow oyster spat to attach and grow.

In addition to attracting native oyster larvae, these reefs also act as habitat for clams, small and juvenile finfish, crabs and shrimp. These are all food for larger fish and attract them. While oyster sanctuaries are closed to oyster fishing they are open to hook-and-line anglers and are often popular and productive fishing spots. Through continued association with various academic institutions, state and federal agencies and collaboration with commercial fishermen, the Oyster sanctuary program continues to develop more refined techniques for siting, building and monitoring oyster sanctuaries.
How are oyster sanctuaries constructed?

A variety of materials are used to create a grid array of mounds, piles and pre-fabricated oyster collecting units. This is engineered to provide quality surface area, vertical relief, varying profile and variations in bottom contour, plus availability and surface area for stationary marine plants and invertebrates — collectively known as complexity and all are requirements for successful oyster reefs. The reefs are constructed using a variety of materials suitable for oyster settlement, survival and growth. These materials include: natural oyster and clam shell, class B rip-rap marl, Reef Balls™, concrete pipes, recycled crushed concrete and various types of mined rock.

Because bottom disturbing gear is prohibited on sanctuaries, the Division of Marine Fisheries seeks input on the best area to locate a site to minimize interactions with trawls, while maximizing the benefits of the site to oystermen and recreational fishermen.

University research and continual monitoring by the Division of Marine Fisheries has found the reef network is extremely successful as a source of oyster larvae to the overall Pamlico Sound population. New sanctuary sites, will help support the current stock and likely improve the oyster population in the long term. A more abundant oyster population directly translates to improved water quality and health for the ecosystem, as well as more oysters available for harvest.

Oyster sanctuaries are designed and built as a way to give back to North Carolinians. Therefore, the Division of Marine Fisheries seeks public input on the best area to locate a site to minimize interactions with trawls, while maximizing the benefits of the site to oystermen and recreational fishermen. Public meetings are held in the early planning stages of each proposed reef so that comments from the community can be incorporated into reef siting and design.

All of the research on existing oyster sanctuary sites has been positive and the Artificial Reef Programs hopes to be able to establish more in the coming years. They provide habitat for shellfish, crabs, shrimp and fish and the shellfish filter the water. That is good news for fish and fishermen. Check with the Division of Marine Fisheries website (www.ncdmf.net) for updates on all artificial reefs. 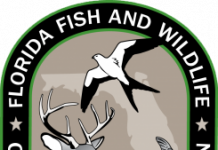 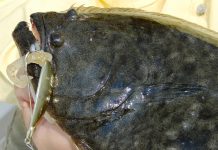 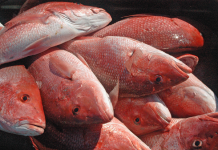