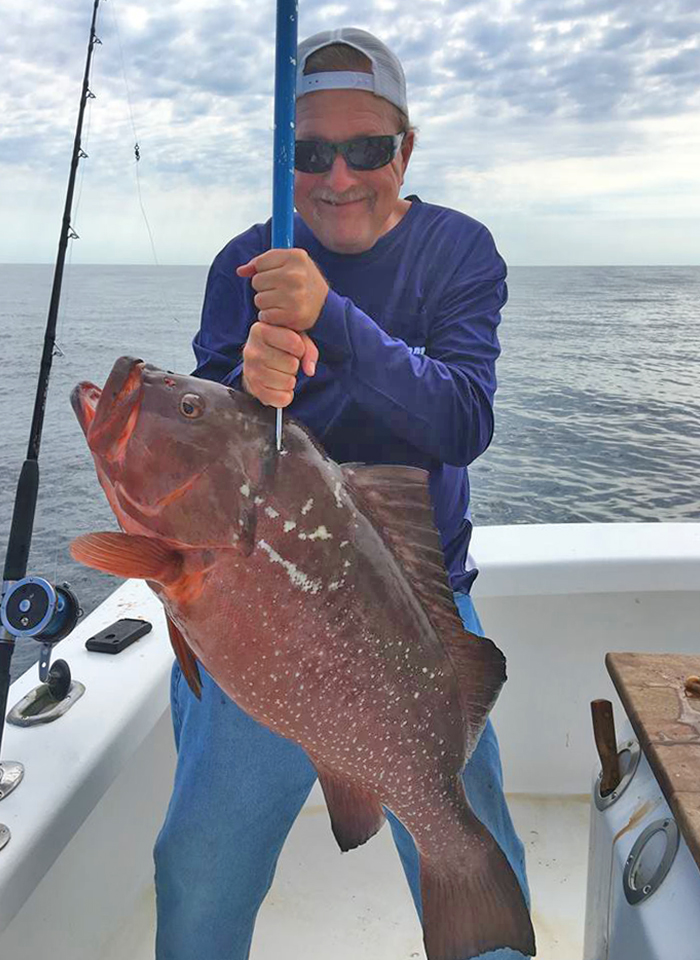 Many people place a lot of stock in the old adage that “The third time tells the tale,” but for Robert Dean of Creedmoor, N.C. the second time was the trick – at least on June 10, 2017.

Dean was fishing on the Cheerio Lady, with Capt. John Batson, out of Carolina Beach, on that fateful day  when a hungry red grouper bit twice within 15 minutes.  The second time, Dean bested the fat grouper and fought it to the surface.  It took a while for all the paperwork to be submitted and approved, but Dean’s 35 pound and 11 ounce catch was officially recognized as the new N.C. record on February 2, 2018.  There is not a time limit for applying for N.C. state salt water fishing records.

“Robert’s fish was suicidal,” said Capt. John Batson of the Cheerio Lady (www.carolinabeachcharterfishing.com), with a laugh. “It just wanted to be caught.  We were about 43 miles off Carolina Beach and this was our first stop. It was a rock pile with some three to four foot bumps, so I drifted it once before anchoring.  On that drift, one of the other fishermen hooked something he couldn’t handle.  It was definitely a nice fish and had him all bowed up and pinned to the rail before it got back into the rocks and broke him off.”That was the fish Robert caught later,” Batson said.  “Once I saw where the concentration of fish was, I swung back and anchored to set us up over them.  It was about 15 minutes later that Robert hooked this same fish. We didn’t know it then, but it was.  It gave him a run for his money too, but he got it up.  It had the first circle hook, with the broken line, still stuck in the corner of its jaw.”

“I have been fishing with Capt. John (Batson) and his family for a bunch of years,” Dean said. “They specialize in bottom fishing and I’ve been booking the second week of June for more than 10 years. We always have good catches and this year was especially good. The state record was truly the icing on the cake, but we also caught several hog snappers and a lobster.

“We had only been fishing about 15 minutes when this grouper hit,” Dean said. “I’d like to say I knew it was special right off, but that isn’t so. It hit just about like any other grouper. I’d get a little line in and then he would take some back. Once he got near the boat though, it changed a little. Something spooked him and he took off like an amberjack. I don’t know how long it took, but he worked me out after that. I finally had to work my way around the boat to get him where Capt. John could gaff him.

“Once Capt. John lifted him in the boat we could see he had a hook with a short piece of line in his jaw, Dean said.  “We took a closer look and realized it was a new hook – one of ours from earlier that morning.  This was the grouper that had broken off just a few minutes earlier and it was still feeding, even with the circle hook in its jaw.”

Dean said all agreed this was an exceptionally large red grouper and that it should be weighed on official scales once back at the dock.  He wasn’t thinking state record, but he had caught a 31 pounder several years earlier and thought this one was a little heavier.  Dean said he hated that someone else lost it, but was really happy to catch it.

Dean said he enjoys all offshore bottom fishing, especially grouper fishing and it works out well as his wife enjoys eating them.  He said this is a time of year Capt. Batson catches a lot of nice grouper and he was hoping to have a fun day on the water and carry home a bunch of grouper fillets.  Both of those goals were fulfilled and there was more.  In addition to the new state record, the catch on this trip included several more grouper, plus several hog snapper, a spiny lobster and an assortment of other offshore bottom fish.

Dean was using a mixed bait of squid and a cigar minnow when the big grouper hit.  He said he likes to put several pieces of squid on the hooks as it lasts better when the overly abundant bait thieves are pecking at it.

Dean was fishing a combination of a JB Custom Rod, built to Batson’s specs, and a PENN 3/0 Senator reel.  The reel was filled with Momoi 80 pound test mono line in the smoke gray color and the bait was pinned on a Mustad circle hook.