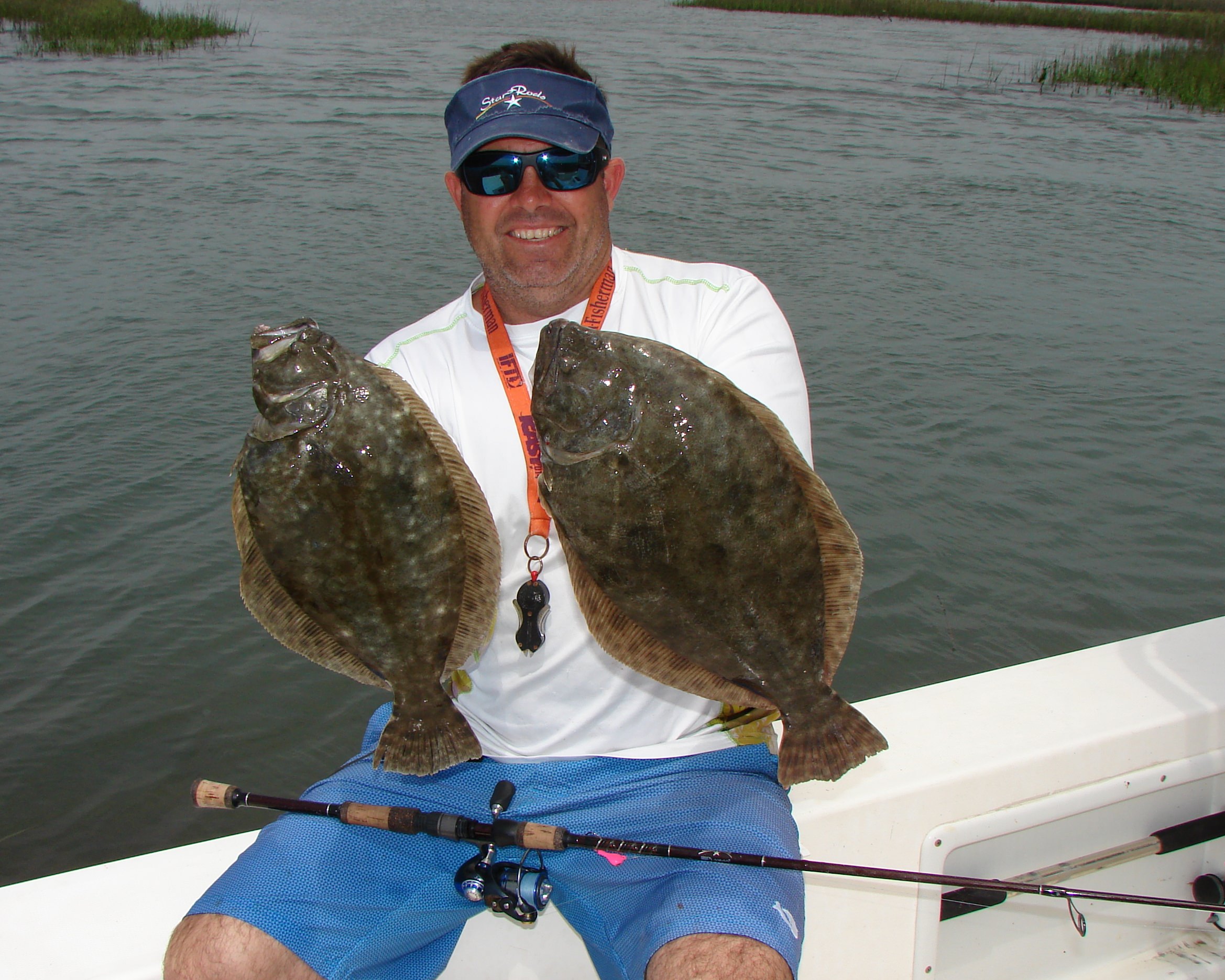 The 2020 NC flounder season will only be 6 1/2 weeks.  It opened on August 16 at 12:01 A.M. and will end at 11:59 P.M. on September 30.  This seriously limited fishing time is due to the N.C. Marine Fisheries Commission seeing the need to reduce the flounder harvest to allow flounder to recover from all time lows.

Fishermen have waited, not really very patiently, but they have waited since the season closed in September of 2019 to be able to add flounder to their coolers rather than having to release them.  It has been tough, but a huge reduction in the flounder catch was recommended by the fisheries biologists at the N.C. Division of Marine Fisheries and the Marine Fisheries Commission felt the long closed season was the best way to achieve the reduction.

Some of the catches of the first few days would lend support to the fishermen’s argument that flounder are abundant and don’t need this protection.  However, expectations are for the catch numbers to slowly decline over the length of the season as more flounder are caught in community spots and easy to reach locations.  This article will offer some tips and suggestions that hopefully will keep the catch going all season.  You get to try them and be the judge.

The first thing is to understand the tides and that the stage and direction of the tide greatly affects fishing and especially for flounder.  As Capt. Noah Lynk of Noah’s Ark Charters (www.noahsarkcharters.com, 252-342-6911) in Harkers Island said, “Not many flounder bite when the water isn’t moving.  Flounder don’t swim around a lot like most other species.  They move into an area and will stay there as long as the current is washing bait by.”

If this seems like it’s too simple, it has been simplified a little.  Depending on the moon phase and wind, a tide change can vary from 5 1/2 hours to more than 6 1/2 hours.  So, 6 hours and 15 minutes isn’t exact, but it’s close enough to plan a fishing trip.  The consistency is that the same stage of the tide will be very close to an hour later each day.  Paying attention to the tide really helps to fine tune flounder fishing when they only bite in a certain area at a certain stage of the tide.

Another thing to understand with tides is that the velocity of the tidal current changes.  There is an axiom called “The Rule of Twelves” that can be Googled for further explanation, but the basis is that the tide flows slowly early and late in the tide change and faster during the middle of the change.  This is a good starting point as some places produce better when the tide is moving slowly and some when it is moving quicker.  Learning this comes with experience as it requires on-the-water research to know where these spots are and which spot is which.

Where Are The Flounder?

Next is understanding where flounder gather.  It’s possible to occasionally catch a flounder almost anywhere.  In one lake, yeah, a lake, just outside of Wilmington, NC, there is a flounder population that appears to be reproducing.  Fishermen after bass and catfish occasionally catch them.  However, the requirement for catching flounder dinners consistently, is knowing where they gather.

Flounder tend to gather where structure concentrates baitfish for them to eat.  In the ocean this might be natural bottom structure, jetties, sand bars, shoals, shipwrecks or artificial reefs.  Moving inside the inlets, this might also include bridges, bulkheads, docks, rip rap, oyster rocks and a multitude of other underwater structure.

It’s not what you see above the water that makes this a good flounder spot, but all the underwater structure you can’t see.  Up until the mid 1900s the Southport Waterfront was the bustling center of town.  There were numerous docks, shrimp houses, fish houses, a crab processing plant and even several railway operations in a 7 block area.  Storms and time took their toll, but much of the base for all this is still scattered under water.

All that remains of the Cape Fear Quarantine Station is a single concrete platform about 25 feet square that was the base for the station’s water tower.  This is across the river from Southport and just upriver from Battery Island.  This was once a full hospital, with eight buildings, plus the water tower.  A fire and Hurricane Hazel took it out in the early 1950s, but much of the structure remains under water around the platform.  There are places like this at almost every coastal town along the East Coast.

Which Bait Do I Use? 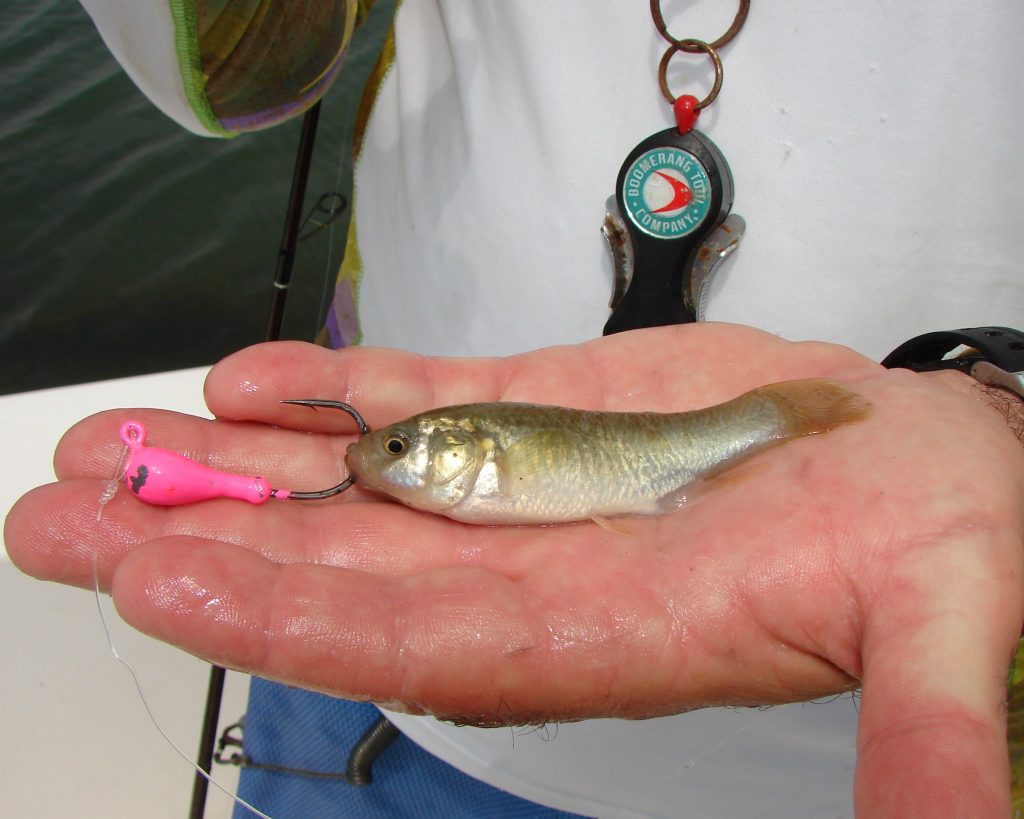 Many fishermen feel that using live bait is the best way to catch flounder.  The consensus is that overall, 3-5 inch mullet minnows catch flounder best.  There is a bit of disagreement on whether mud minnows or peanut menhaden are the second best live baits.  Flounder eat both, so this might be a personal choice.  Flounder will also eat small pinfish, spots, croakers and other small fish.  Of these, I have had the best luck with small pinfish.

The most popular rig for fishing live baits for flounder is the Carolina Rig.  This rig is basically a piece of 20 to 30 pound monofilament or fluorocarbon line with a hook on one end and a small swivel on the other.  It is a good thing for this rig to be simple and inexpensive.  If you’re not losing rigs occasionally, you’re not fishing close enough to the structure where flounder are hiding.

The length of the Carolina rig leader varies from 8 to 24 inches, depending on the fisherman.  I like the shorter end of this range as it gives a live bait less line to get tangled in something.  With the Carolina rig, an egg sinker and a bead are placed on the line from the reel before tying it to the other eye of the swivel.  The bead is placed below the sinker and keeps the sinker from fraying and weakening the knot.

Choosing the sinker is easy.  Use the lightest one that will hold the rig in place on the bottom.  Different fishermen use different hooks on their Carolina rigs.  I have tried many and like the Eagle Claw (www.eagleclaw.com) L042 in size 2 the best.  This is an offset hook with a wide gap and is made of strong enough wire to handle pulling a doormat out of its favorite structure without bending open.  It isn’t quite a circle hook, so those of us who like to set the hook still can.  The wide gap helps hold the live bait and the offset improves hookups.

Some fishermen have good luck making an even simpler rig.  They tie a foot or two of monofilament or fluorocarbon leader to the end of their line and tie a jig head on the end.  The bait is hooked through the lips on the hook of the jig head.  This is weight and hook in one.  Most fishermen prefer the boxing glove shape, with a short shank hook, for this jig head.  This works pretty well, but the hookup ratio is not as good as with a Carolina rig.

There are also rigs for trolling or drifting for flounder.  The Fluke Tamer and POP rigs made by Sea Striker (www.seastriker.com) catch well when moving.  While constructed slightly differently, both of these rigs use a pair of drops.  One is a plain hook that drags along the bottom and the other is a hook with a bucktail up just a couple of inches.

Flounder will also hit lures.  The Late Capt. Jimmy Price of Southport, N.C. began fishing for flounder with live baits, but switched to a combination using a bucktail and a plastic strip that resembled a strip of fish belly.  He lightly jigged this vertically just off the bottom and let it fall back.  This technique has become very popular, especially for fishing jumbled structure in deeper water.  Half to 3/4 ounce bucktails usually work well inshore, while several ounces helps get to the bottom in the ocean.

Capt. Price used a real bucktail, not one with synthetic hair.   Salty Bay Baits (www.saltybaybaits.com) makes the Flounder Flap, a plastic strip designed by Capt. Price to dress the rig.  Some fishermen dress the bucktail with 4 inch soft plastic minnows and shrimp.  Price advocated adding scent to make this more appealing to flounder and it definitely doesn’t hurt.

In recent years, I have caught a surprising number of flounder on spinner baits and weedless spoons with an in-line spinner in front.  My best luck has come using a double cupped Colorado blade and retrieving it just fast enough to work the rod tip as it spins.  Apparently the vibration of this blade turning slowly gets the flounder’s attention.  Many tackle companies make spinnerbaits with Colorado blades and Cajun Thunder (www.thecajunthunder.com) makes the weedless spoon/in-line spinner combination in a lure they call the Cajun Sleigh.

A big bucket of patience is a virtue when fishing for flounder.  It’s needed a couple of ways.  The first patience may be a little easier to manage.  It’s simply waiting for a spot to produce.

Many times you hear fishermen say they fished for an hour or more and then the fish turned on and they caught a bunch in a short time.  Some spots are very specific to a certain tide stage.  If you aren’t there at the right time, fishing is slow, but when the tide is right, they bite like hungry dogs.  Then, once the tide passes the preferred stage, the action slows again.

The next patience is being able to wait for a flounder to turn and swallow your bait after feeling it grab the bait. Depending on the size of the bait and whether it’s live or artificial, this could be anywhere from not needing to pause to a wait of a minute or so.

Catching flounder on hard artificial baits doesn’t require a pause.  When they grab it, they’ve either got the hook or they don’t and they’ll drop it quickly when it doesn’t taste good.  Flounder caught on soft artificials get a short pause, but only a second or so.  If you’re not sure they’ve got the bait, slowly and gently lift the rod and see if you feel more weight than just the lure.  If you do, set the hook!

The time between feeling the flounder pick up the bait and setting the hook is painfully slow when fishing live baits.  If you try to set the hook too soon, you’ll pull back a bait that looks scaled.  The flounder didn’t have the bait well enough for the hook to grab and you pulled it out of his teeth.  Most folks learn better after doing this a few times. 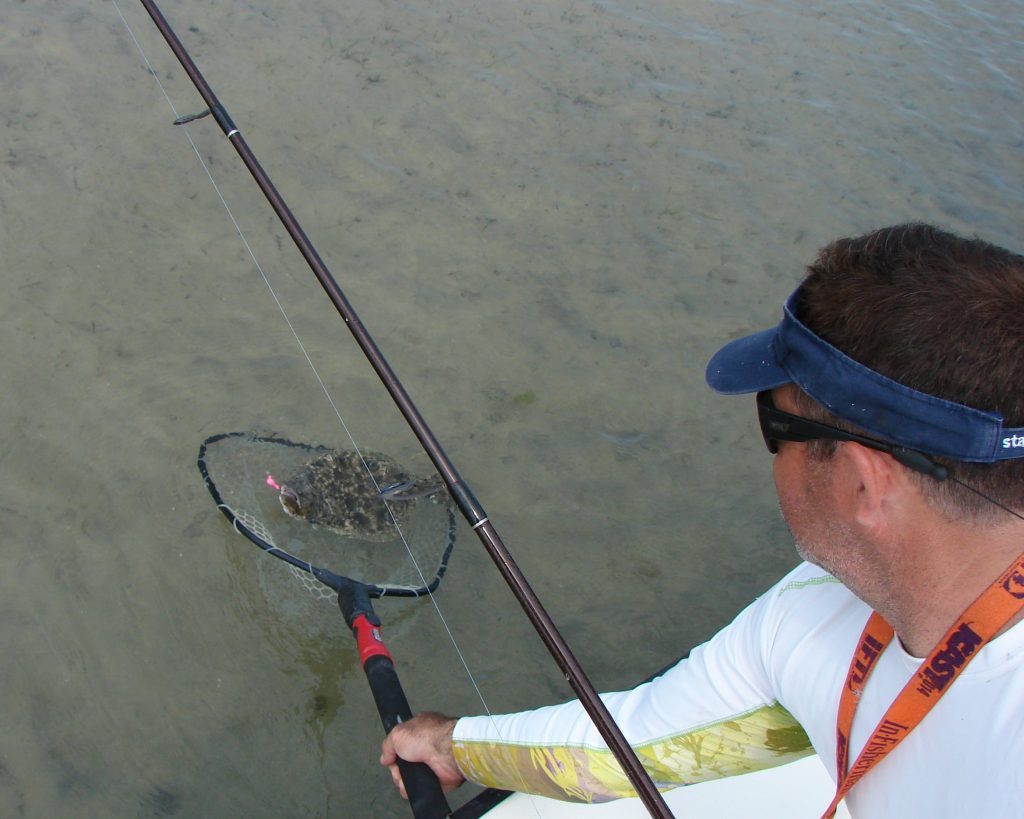 A final tip is to always net flounder from the front.  Lead them into the net and lift.  Flounder don’t have a reverse gear and can’t back out of a net.  However, if you try to net one from the tail and touch it, you’ll see how fast a flounder can surge forward and away from the net.  Sometimes you get lucky and can reel them back in, but sometimes the hook pulls or the line breaks and the netter has to live with losing someone’s “biggest flounder ever.”

Hopefully some of these tips will help you locate and catch flounder.  All N.C. fishermen need to get out and do what we’re going to do by September 30.  Let’s hope you have several good flatfish meals before then and also store a few in your freezer for later.