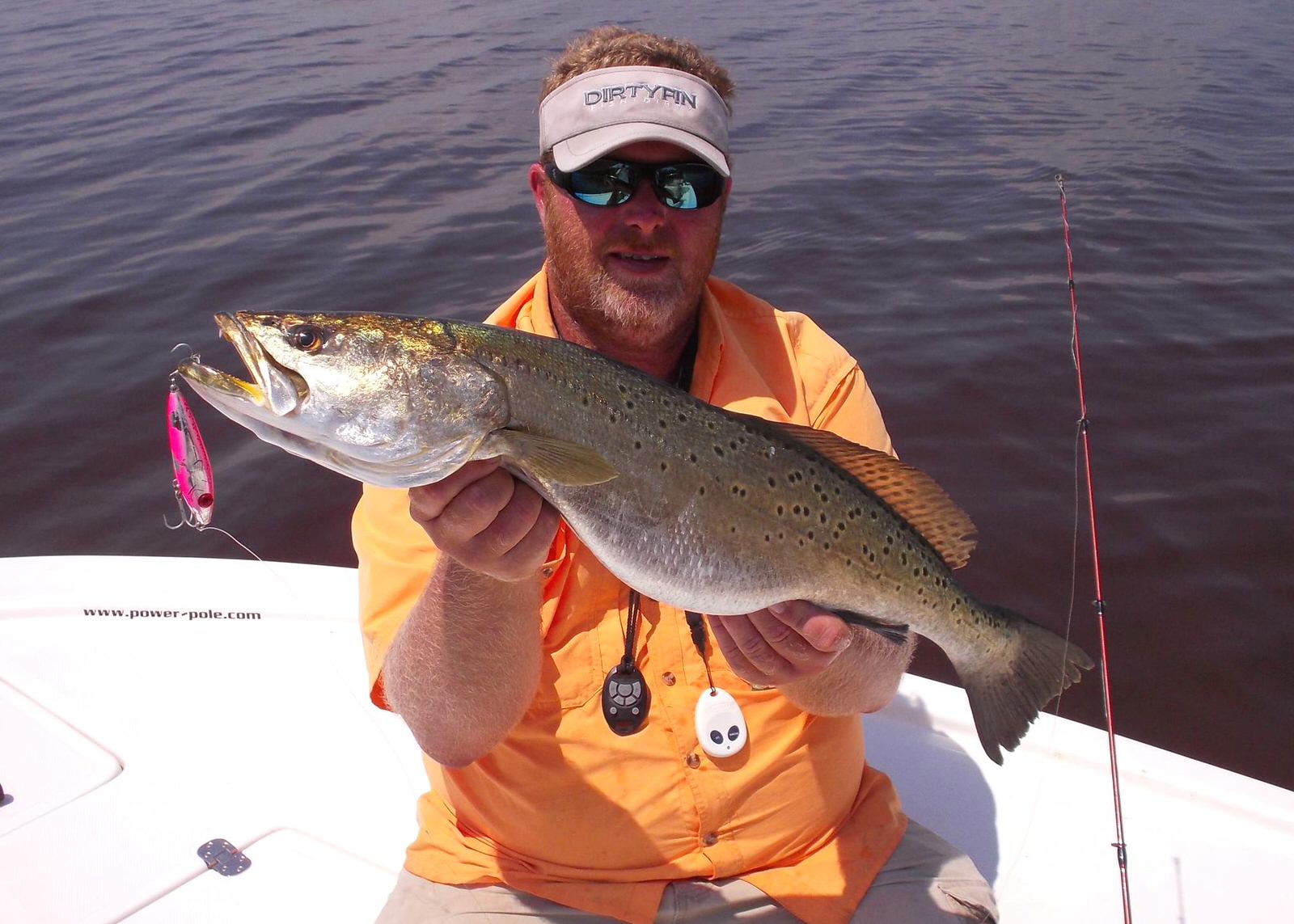 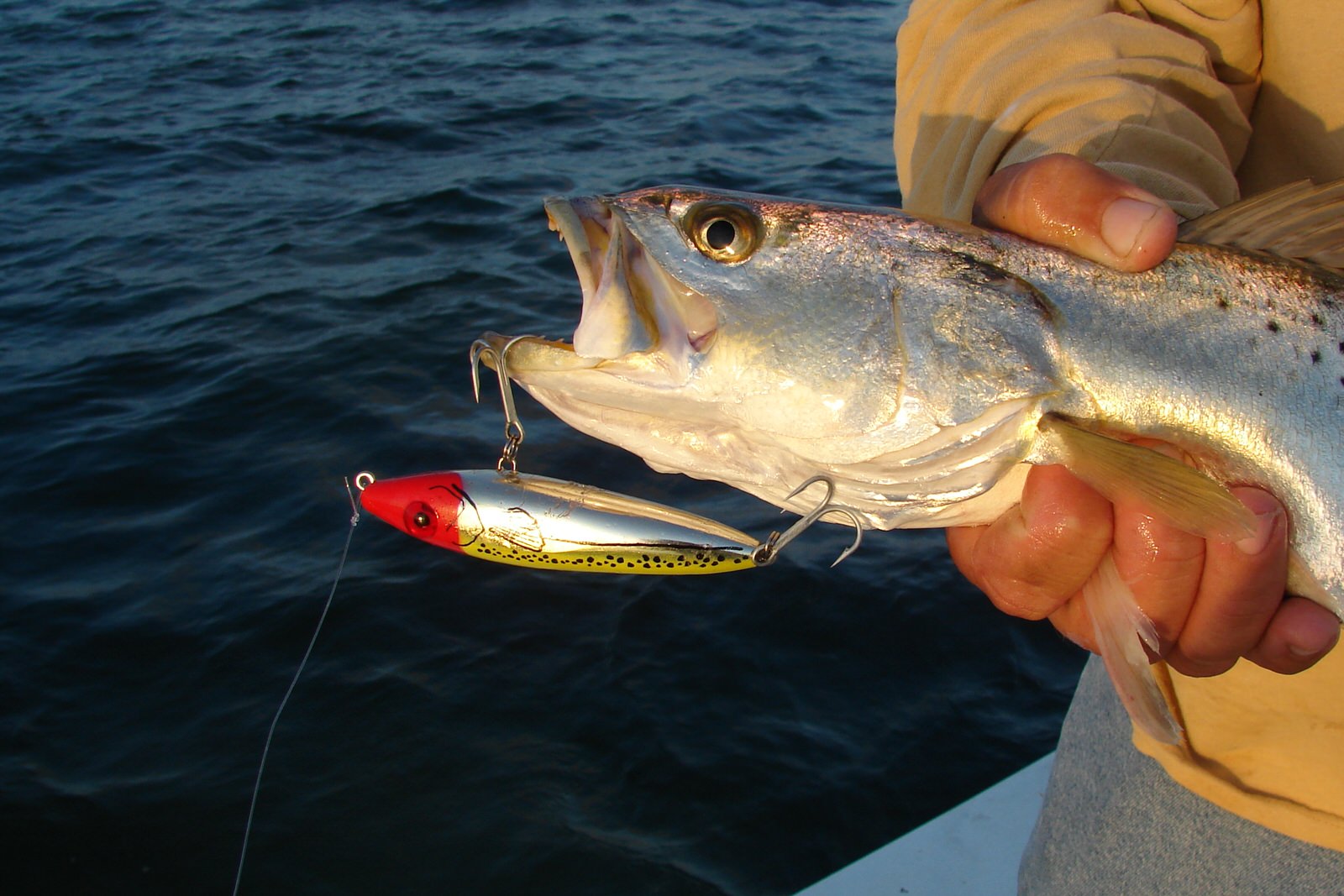 If you’ve never fished topwater lures before, you’re really missing out.  Any fishing is fun, but when a hungry redfish or speckled trout humps the water just behind a lure as it charges it, well, that’s something really special.  Many fishermen admit they momentarily stop breathing when they see that telltale push charging their lure.  Topwater lures may or may not help generate strikes, but it’s definitely exhilarating to watch a hungry fish slam a topwater lure and get a gulp of fresh air at the same time.

One of the most spectacular sights in inshore fishing is watching an upper or slightly over slot red drum slam a topwater bait.  The fish is large enough to be impressive on its own, but when it pushes up behind that bait and rolls to suck it in, that is truly something to behold.  Even after years of enjoying this special strike, I still hold my breath from when I first see the push of water to when I feel the fish grab the lure.  That second or so is so intense it jacks up my adrenaline and makes the hairs on the back of my neck stand up!

Sure, the strike of other fish is also nice, but there is something about the strike of a big pup that really does it for me.  Puppy drum have an inferior mouth (mouth is located on the bottom of the bead, rather than at the front) and have to either lift their head almost completely out of the water or roll at least on their side to strike anything on the surface.

When a puppy drum charges a lure and rolls for the strike, it creates a small nose wake that tends to push the lure away from it and cause the fish to miss.  This happens more often with larger fish and appears to be as frustrating to them as it is to me.  Drum don’t light up like billfish and some of the offshore gamefish, but if they did, some would be glowing like jack-o-lanterns on Halloween evening after missing the lure two or three times.

As exciting as this topwater charge is, we have to learn to concentrate and keep the lure moving steadily to help the fish catch it – and that isn’t easy, even after years of experience.  I still sometimes find myself getting caught up in the moment and watching the fish charge and swipe at the lure.  Sometimes it looks like the fish has swallowed the lure, but until you feel the fish’s weight it doesn’t have the lure and you can’t set the hook.

The self-control to keep working the lure and waiting until you feel the fish is difficult to master.  Many fishermen miss fish because they got excited seeing the fish charge and tried to set the hook before the fish actually had the lure.  This is not only frustrating while fishing; it also makes for fish dinners that are more slaw, grits, and hushpuppies than fish.

Trout are also fun to catch on topwaters, but come with their own set of frustrations.  Like drum, many time trout show themselves as they charge the lure and cause fishermen to miss them by trying to set the hook before they have it.  You have to feel them too before setting the hook.  Another frustration with trout is they tend to swipe at the lure and may miss the hooks or only get lightly foul hooked, which leads to them pulling free just about the time you are leading them into the landing net.

There are numerous lures designed for fishing topwater and many have the same actions.  The two basic actions are “walking the dog” and “chugging.”  Chugging is easiest as you only move the lure forward while popping your rod occasionally to get its flat face to push water and make a splash.  Walking the dog takes a little more practice as it involves moving the lure side to side during the retrieve. 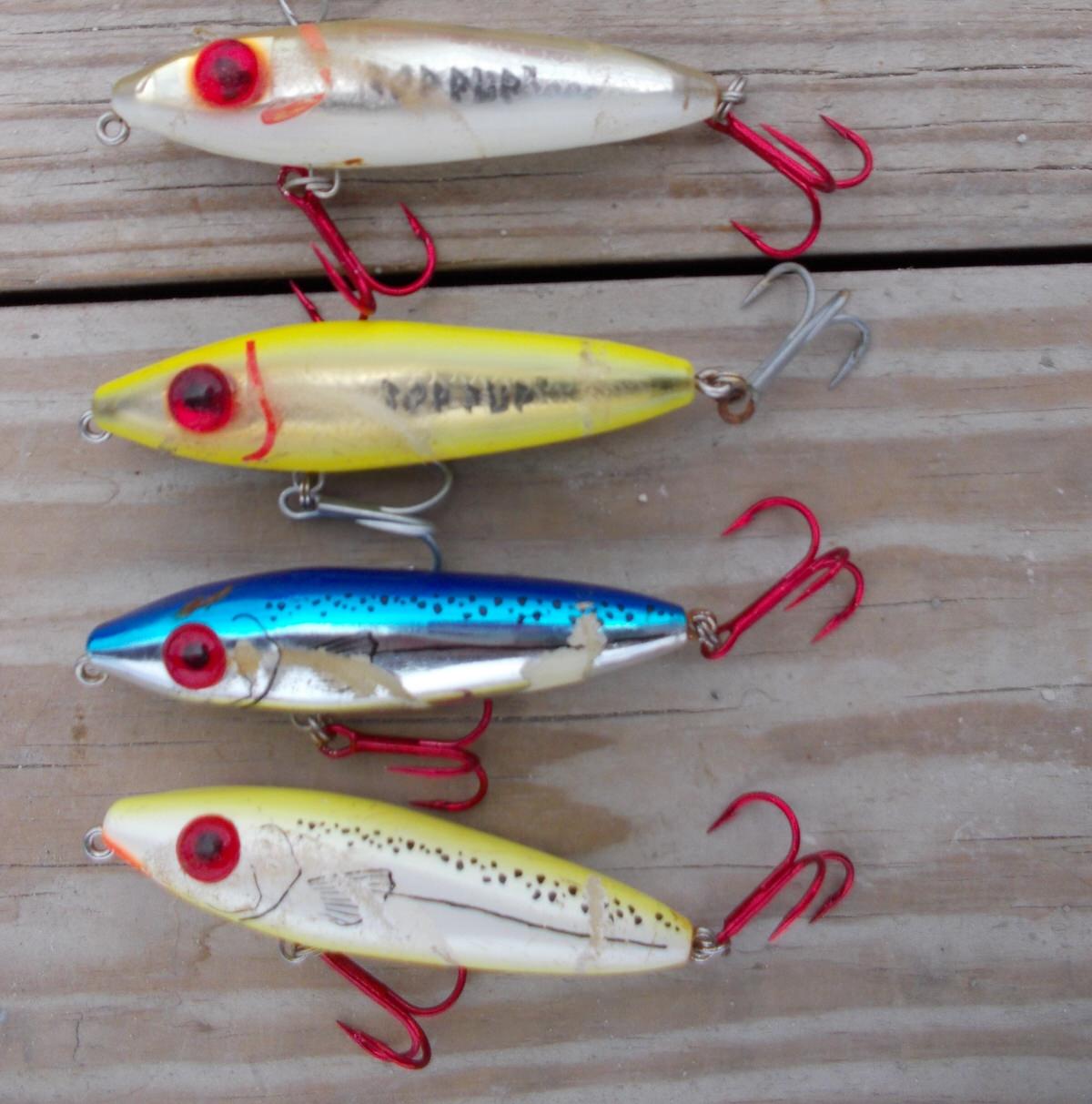 Some of the more popular saltwater topwater lures include the Rapala Skitterwalk, Bomber Badonk-A-Donk, Heddon Zara Spook, and MirrOlure Top Dog, She Dog, Pro Dog, Poppa Mullet, Poppa Dog,  MirrOmullet, and more.  I am most familiar with the MirrOlures and will use them as my examples. My suggestion to those who prefer the other brands is to look for similar characteristics.

I began topwater fishing with MirrOlure Top Dog lures and continue to primarily use Top Dogs, Top Dog Jr’s, Top Pups, Pro Dogs, and Poppa Dog for puppy drum.  As the names indicate, the primary difference between these is size.  The Pro Dogs have clear eyes and the Poppa Dog has a concave lip that moves more water and makes bigger splashes.  These are made of dense plastic, with a single low-frequency rattle.  They ride a little deeper in the water and require a little effort to walk the dog.

The Poppa Dog has helped many fishermen just beginning to use topwater lures gain confidence and catch fish.  With its concave lip design, it creates splash even when the line pop to make the walk-the-dog motion isn’t perfect and the lure moves straight.  This also shakes the rattle to help attract fish.  MirrOlure says the extra splash and low-frequency rattle of the Poppa Dog often helps draw strikes when fish are reluctant to bite.

As stated earlier, I began topwater fishing with Top Dogs, Top Pups, and such, which have a low-frequency rattle.  Fortunately, I am occasionally invited fishing by really good fishermen and I have learned a lot about MirrOlures by fishing with Eric Bachnik, whose grandfather started the L&S Lure Company that includes MirrOlures.  The first time fishing with Eric, I was in the greater Tampa/St. Petersburg area for a photoshoot and Eric invited me fishing.  I’ve made plenty of mistakes in my life, but turning down that invite wasn’t one.  I jumped at the opportunity and beat him to the ramp that morning.

We began a little before sunrise and the fishing was great – for Eric.  We were both throwing MirrOlure topwaters, but he was using a She Dog and I was using a Top Pup.  Sensing my growing frustration, Eric suggested I switch from the Top Dog to a She Dog or She Pup.  This was the guy who makes the lures and he had been catching, so I took his advice and tied on a She Pup – with a loop knot of course.

The difference couldn’t have been more amazing.  Casting to the same spot and using the same retrieve, I caught a trout on the first cast.  With the lure change, my productivity began catching up to his.  The only thing I immediately noticed was the She Pup was a little easier to work and I had to back off a little on my line pops when walking it.

The difference was obvious, so I asked Eric to explain.  He said the She Dog and She Pup are made of a lighter plastic and have multiple smaller rattles for a higher frequency rattle.  They also float a little higher on the water, which allows them to work easier.  This construction is also used for the smaller Poppa Mullet and MirrOmullet.

I’m still getting used to the Poppa Mullet and MirrOmullet, but have made She Dogs and She Pups a staple in my topwater fishing box.  I tend to use them more when targeting specks, but they catch pups too.  With them sitting a little higher on the water I can work them more subtly than the Top Dog series and this works well when fishing a small creek or somewhere I’m concerned with being too loud and spooking fish.

The MirrOmullet can be worked even more subtly and is a real tool on those glassy mornings without a breath of wind.  The poppa mullet could be considered a smaller, high-frequency version of the Poppa Dog.  It is smaller, with a high-frequency rattle and can be worked straight, as a popper, or popped hard to create more splash.

The right fishing equipment also helps work topwaters to insure better action.  I like fast tip rods, like the Star Seagis line, as they require less effort to get a lure to walk the dog and can be more precise than rods with slow or parabolic tapers.  I like 7 footers for general fishing, but carry a 7 ½ footer for when the cast needs to be a few yards longer. 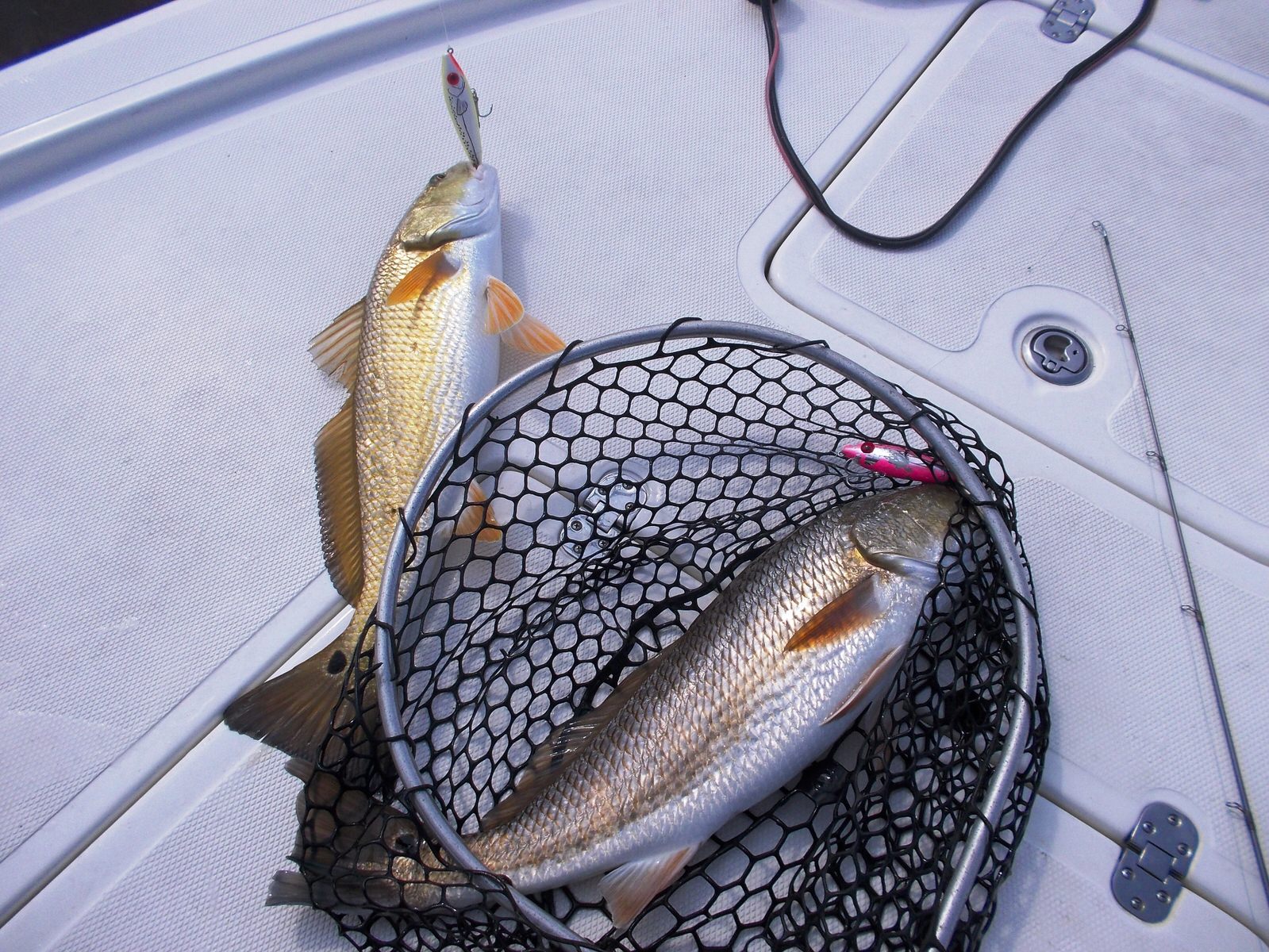 When I first began fishing topwaters, many fishermen thought you could only walk the dog using baitcasting reels.  The current crop of spinning reels with instant anti-reverse has changed that.  Eliminating backlashes have opened topwater fishing to many fishermen that never mastered bait casters.

As with every type of fishing, there are a wide variety of opinions regarding the best line for fishing topwaters.  Several of my friends, including one very successful charter captain and TV show host, prefer monofilament line and say its inherent stretch helps delay the lure’s movement when setting a hook and gives the fish another half-second or so to actually catch the lure.  That seems to me to be stretching the point (pun intended) but it may help some fishermen.  The negative is the inherent stretch of mono also requires a bit more effort to walk the lure.

I like superbraid lines for the running line and prefer a high visibility line so I can see it.  I add a two-foot low visibility leader when fishing from my boat and bump the leader to about 8 feet when fishing my kayak.  The extra leader length allows for some stretch while having to high stick the rod to get a fish boat side in the kayak.  This is a fluorocarbon leader when fishing clear water, but in murky water a low visibility monofilament leader usually works just fine.  If you have doubts, always use fluorocarbon.

If you aren’t enjoying fishing topwater lures, you should give it a try.  It’s a lot of fun and can be amazingly productive at times.  There are already reports of specks and pups hitting topwaters this spring so the time is right.  This usually continues into summer during the first couple of hours of daylight and begins all day again in the fall when mullet minnows begin streaming out of the creeks.  Give topwaters a try.  Be careful though, it’s addicting and you may become more hooked than the fish.