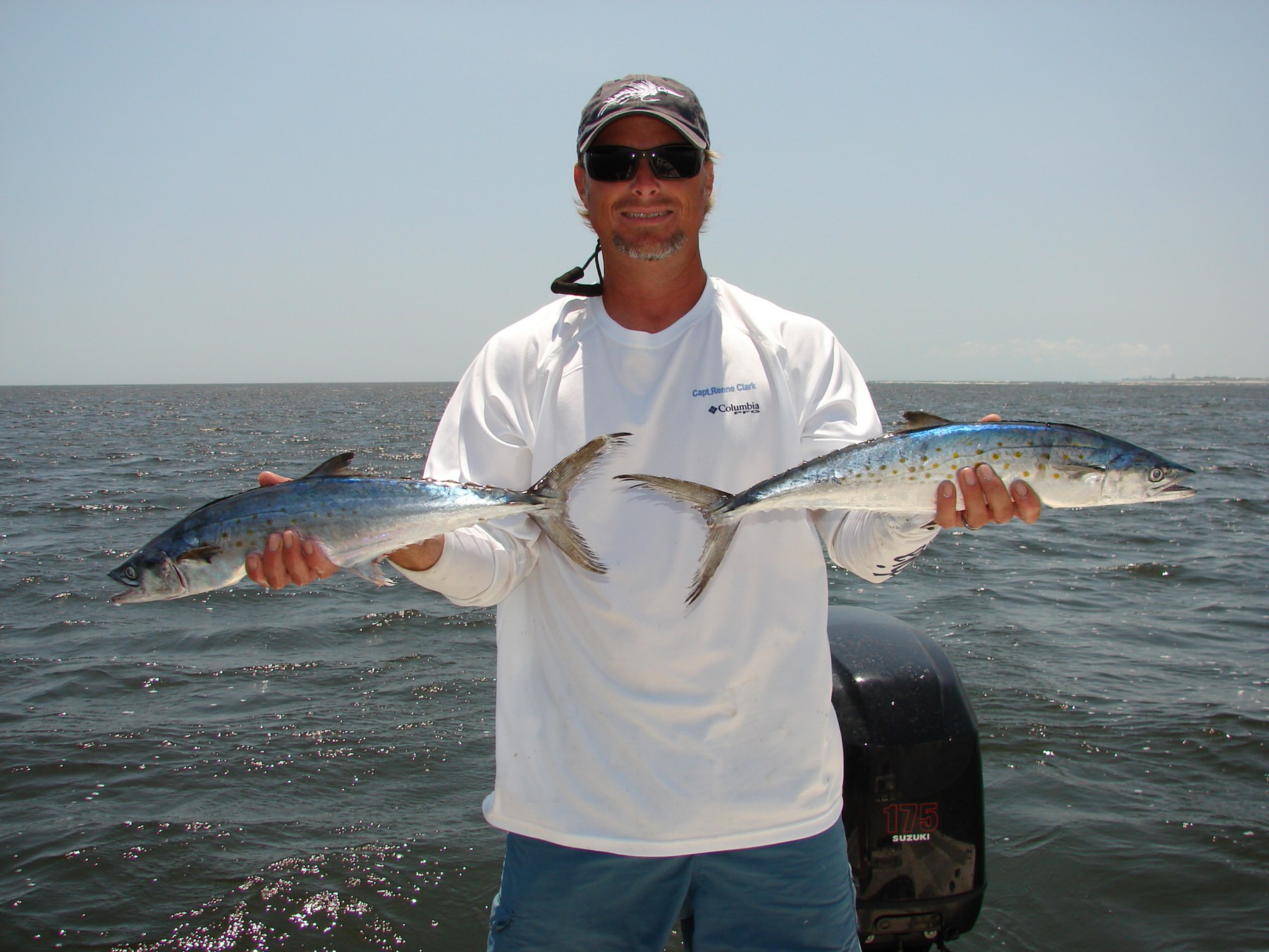 Have you had those times when you can see Spanish mackerel jumping and obviously feeding, but they’ve developed a serious case of lockjaw around every lure you’ve tried? If you say no, I want to take a look in your tackle box and check out your lures. We’ve all had those days and the great majority of them come during the Dog Days of Summer. Yep, that’s right. Spanish macks can be the hardest to catch on those days the ocean looks like a sheet of glass and to add insult to injury, the Spanish are jumping all around you in a sort of middle finger salute from fish that are usually very eager and willing to bite. 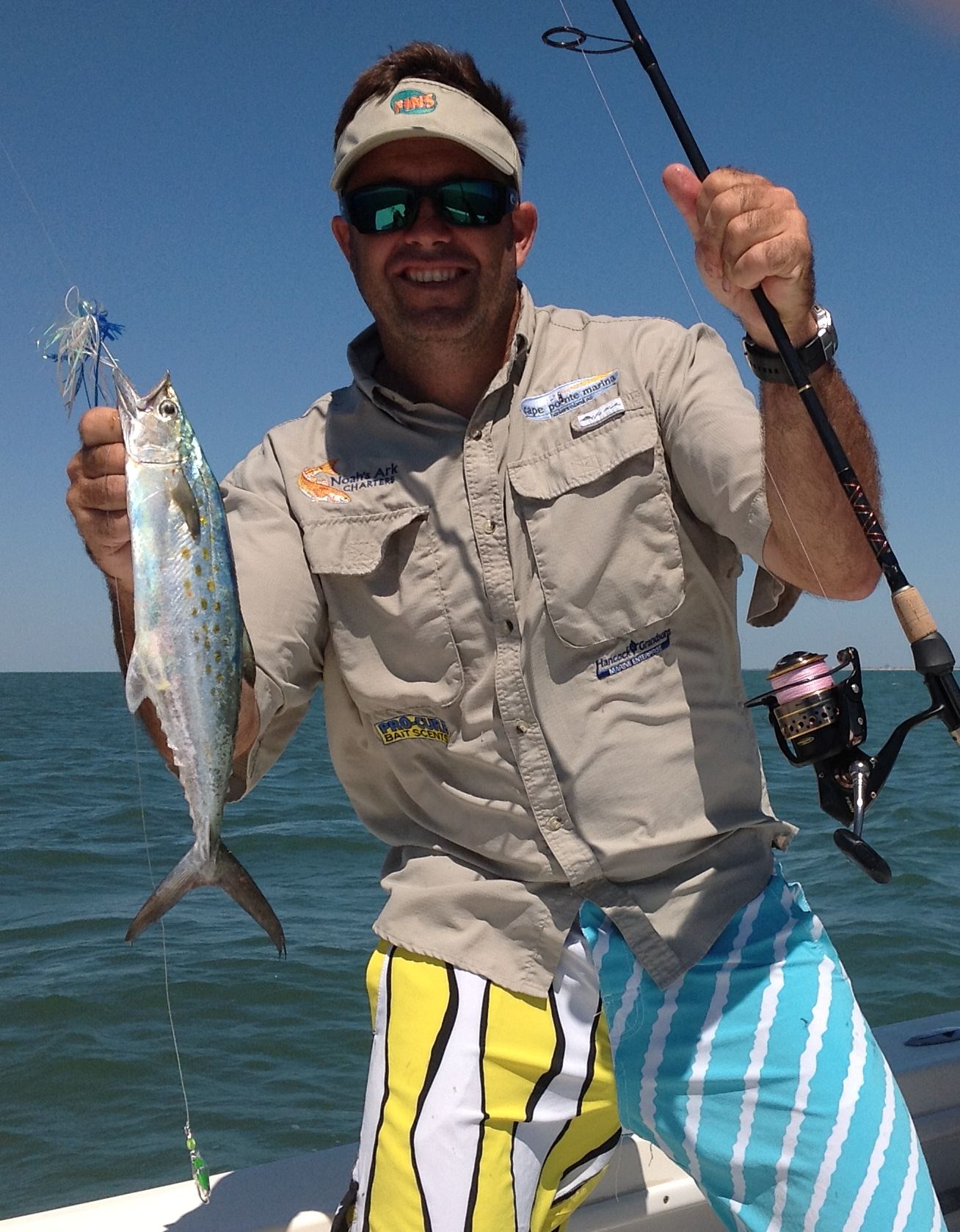 Spanish mackerel are one of the most widespread and popular fish off the SE Atlantic Coast. These coastal pelagic fish are one of the smaller members of the mackerel family and have a pleasant mild flavor. While they are primarily found in the ocean from just beyond the surf and out a few miles, sometimes they also follow baitfish inside the inlets and are caught in larger sounds and rivers. Here in N.C., Spanish mackerel have a liberal limit of 15 fish and many days that limit comes quickly.

Spanish mackerel are usually feeding and once a school is located bites come quickly. However, as mentioned above, there are times they develop a piscatorial version of lockjaw and don’t even look at baits and lures they usually attack with abandon. These are some successful tactics and techniques that usually convince them to bite, when they don’t appear to be in the mood.

Spanish mackerel usually feed aggressively early in the morning and often again late in the afternoon. However, once the water warms into the 80’s, they sometimes get picky about their food, especially during the middle of the day. At this time there are many small silverside minnows in the nearshore ocean and the Spanish fixate on them. This will become very apparent if you catch one and it regurgitates on your deck as Spanish are prone to do. These minnows are noticeably smaller than most lures used to catch Spanish.

When Spanish are feeding on the small silversides, they often appear allergic to larger lures. There are several theories why Spanish switch off to smaller baits in warm water and bright sunlight, but the reasons don’t really matter. What matters is to notice this and switch to smaller lures to continue catching them. Sometimes it also seems that when switching to smaller lures, it helps to troll or retrieve them quicker.

Captain Noah Lynk of Noah’s Ark Charters (www.noahsarkfishingcharters.com) in Harkers Island, N.C. catches a lot of Spanish mackerel from when they arrive in the spring until they leave in the fall. When they get finicky in the warmer water, he uses a Mackerel Duster rig he developed over the years. Lynk’s Mackerel Duster pairs a 1/8-ounce silver head, Mylar duster about 18-24 inches in front of a 00 size Clarkspoon on a tandem rig made with a monofilament or fluorocarbon leader. Lynk uses a 2/0 size silver hook and various colors for the dusters, with primarily silver Clarkspoons.

“I primarily fish Mackerel Dusters on the surface with no weights,” Lynk said. “They skip along the surface like fleeing baitfish and I believe that helps excite the Spanish and produces reaction strikes. Sometimes Spanish hit the duster and sometimes the Clarkspoon – and occasionally both.

“I often also troll a Mackerel Duster or two below the surface behind small planers or trolling sinkers,” Lynk said. “Occasionally these will out fish the surface lines, but most of the time the surface lines catch the great majority of the fish. A great thing about fishing these rigs on the surface with no weight is they can be trolled on lighter outfits and the fisherman get to fight the fish, not a planer or sinker. It’s a lot more fun.”
NOTE: A commercial version of Lynk’s Mackerel Duster rig is produced by Clarkspoon (www.clarkspoon.com).

Capt. Rennie Clark of Tournament Trail Charters (www.CaptRen.com) in Carolina Beach, N.C. likes to troll Mackerel Tree rigs made by Clarkspoon and Sea Striker. These are multiple hook rigs that use several small pieces of different color surgical tubing or flash Mylar on gold hooks in front of a Clarkspoon or jig. The smaller pieces of tubing and Mylar wraps are similar in size to the silversides. 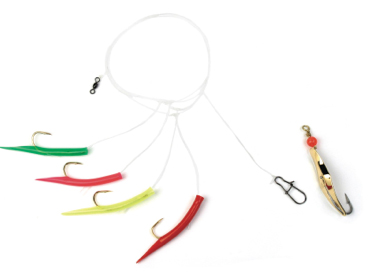 “Actually, I like the Mackerel Tree rigs at any time,” Clark said. “They catch fish all season, including early in the day when Spanish are hitting larger baits and still work when they begin chasing smaller baits during the Dog Days. The Clarkspoon trailing behind them is a larger lure for when a larger fish, looking for a larger bait, swims up. It’s a good mixture and I troll them both on the surface and below it.”

One of my fishing mentors was the late Pete Allred of Pete’s Tackle in Morehead City. Over the years, he helped a lot of fishermen shorten their learning curve and catch fish. Pete was usually busy, but always had time to give impromptu fishing seminars on the counter in his store. “How to catch Spanish mackerel” was the most requested.

Pete began his Spanish mack lessons with the standard technique of small flashy spoons on 20–30-foot leaders behind small planers and trolling sinkers. Then he talked about catching them during the Dog Days of summer, when you could see them jumping and feeding, but they wouldn’t bite. Pete touted trolling speck rigs as the simplest way for beginning fishermen to catch Spanish mackerel when they were feeding on the smaller baitfish and ignoring the usual lures. 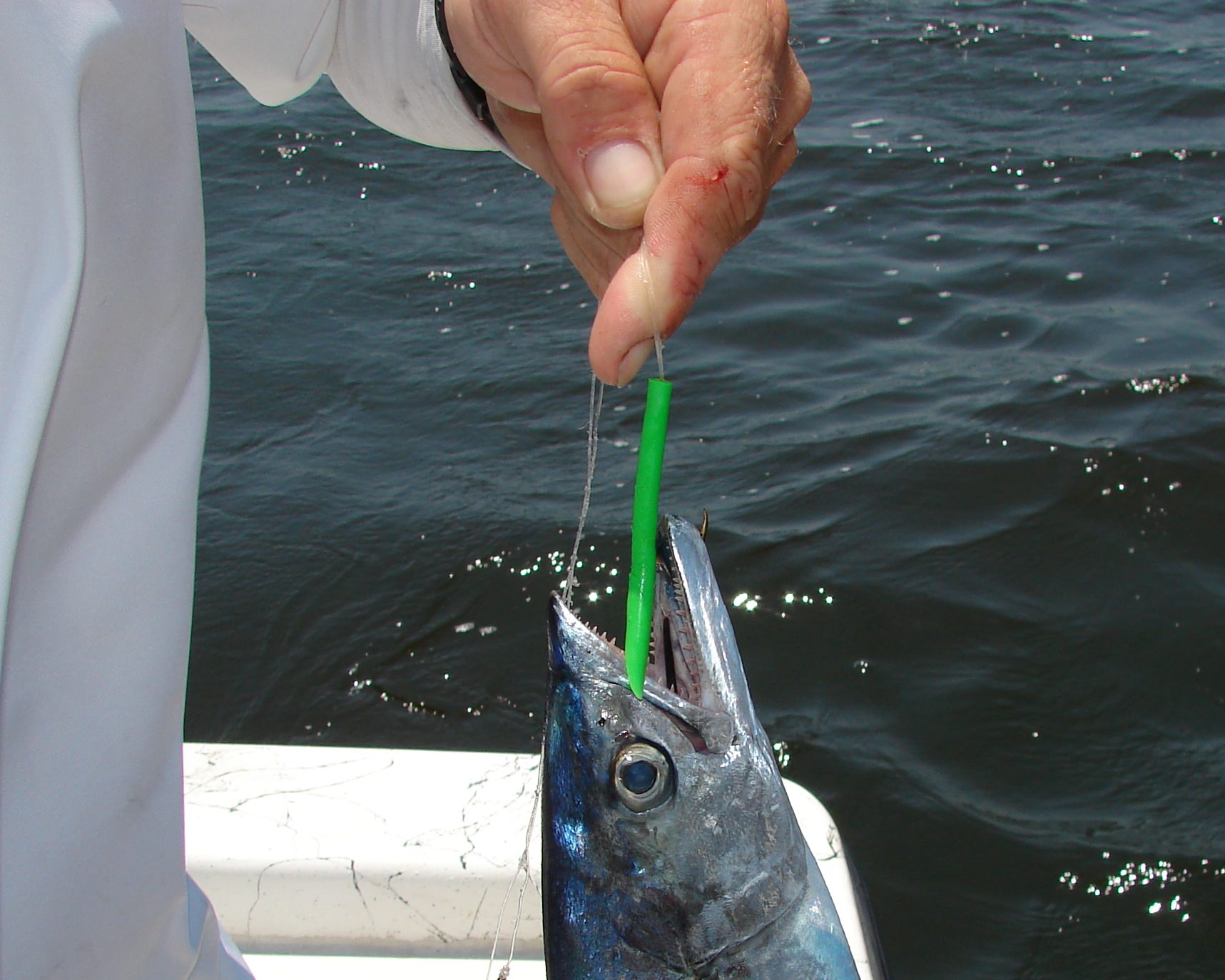 Speck rigs are simply a pair of bucktails tied on a mono leader and they encompass a variety of sizes from about 1/16 ounce up to 1/4 ounce. Lighter bucktails are small and the heavier ones are larger. By varying the size of the bucktail, you can match the size of the baitfish the Spanish are eating.

Pete said to troll the speck rigs well behind the boat and added that increasing the distance of the lure behind the boat also helps at other times Spanish macks are being finicky. This longer distance helps by moving the lure farther away from the noise of the motor and the belly of the longer line dragging in the water helps hold lures, especially the light bucktails, in the water and prevents them from jumping wildly.

Pete said Spanish mackerel become tuned to the speed of the baitfish and trolling too fast or slow could also affect how they were attracted to your lures. He said trolling too slow was the problem far more often than trolling too quickly. He said Spanish macks usually feed at a faster pace and suggested beginning at around 6 knots, then speeding up if they continued not to bite. He promised many customers that small lures trolled quickly were just the ticket for catching lure-shy Spanish and those who followed his advice caught them.

Lynk, Clark and Allred offered several other tips for catching more Spanish mackerel that are important at all times. They said it is very important to troll around a school of feeding Spanish, not across or through them. Use longer lines and the turn around the school will pull the lures into the edge of the school and not spook the feeding mackerel. Running across or through the school will often cause them to dive and they may or may not return to the surface or continue feeding.

Another tip for when Spanish are spread across a larger area, rather than schooled, is to make a series of 90 degree right and left turns. Pay attention to where you get strikes while doing this. The turns change the speeds of the lures a little and you can often see if it will help to speed up or slow down a little. The lues on the inside of the turn slow down as they don’t have to cover as much water, while the lures on the outside of the turn speed up to cover more distance. If you see a pattern, match the speeds of the lines that are catching more.

These tips should help put some meat in the fish box when Spanish macks get finicky during the Dog Days of summer. Give this a try. It isn’t expensive. I also like trolling some 000 and smaller spoons. All the proof you need to know it works is when your fish box fills while others remain frustrated at the fish not biting. Going smaller and quicker to catch more Dog Days Spanish just might make you smile…