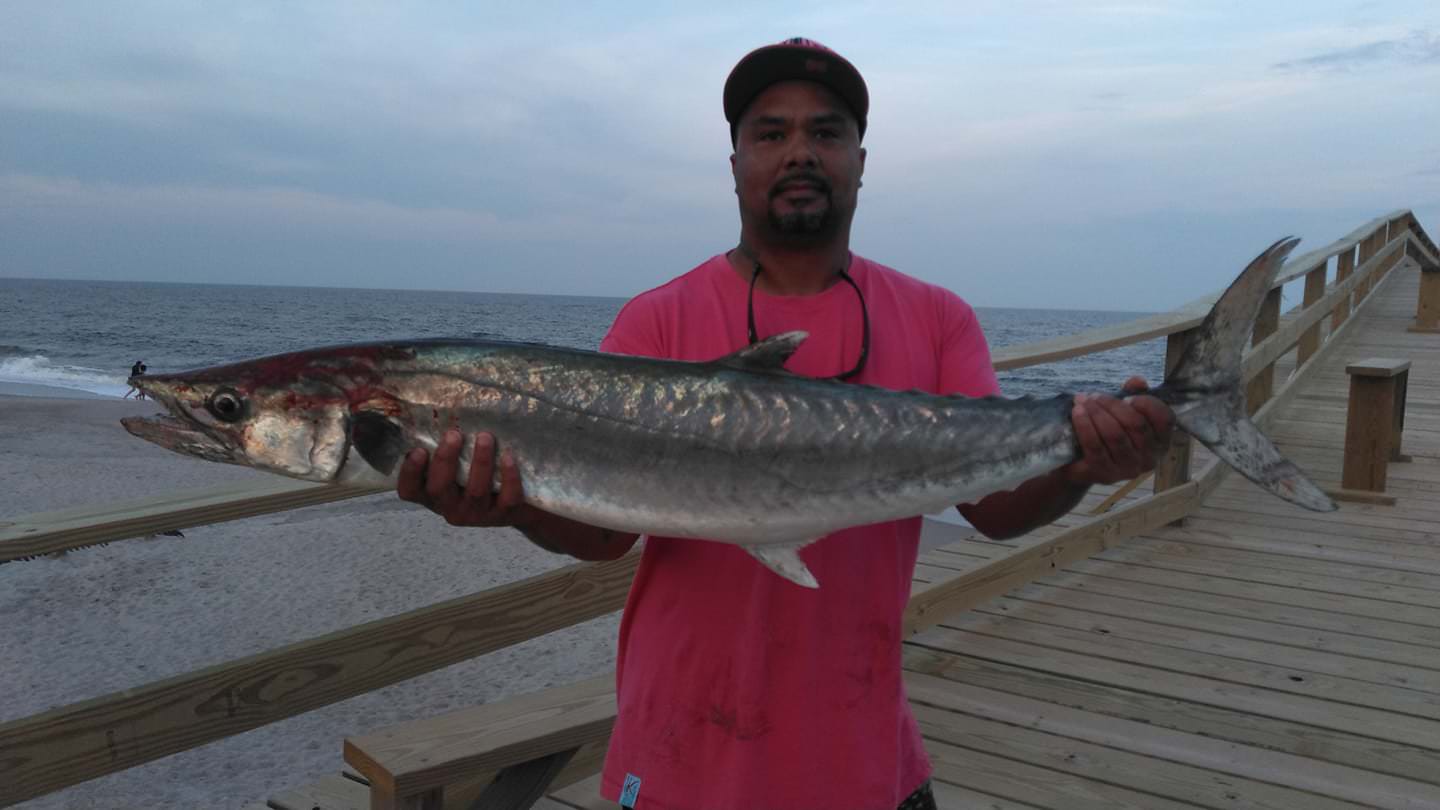 While all sorts of other things continue to be out of whack in the second quarter of 2020, the spring runs of king and Spanish mackerel are happening right on cue.  This is a good thing and brings hope to a lot of fishermen feeling penned up after more than a month of “Stay at Home” orders with many fishing and marine businesses either closed or on very limited hours.  Fishing was considered a good activity to help pass the time and it also provided good food, but many marinas, ramps, fishing piers, and beaches were closed.

Many of the businesses that were closed or limited are beginning to reopen or be open longer hours and fishermen are taking advantage.  Fishermen that don’t have boats are fishing from docks, the bank, the surf, and more ocean piers are reopening, of course with appropriate concern for social distancing.  These are all good things.

There have been some nearshore ocean fish since mid-March.  The action began with whiting (sea mullet, Va. mullet) and blowfish (puffers) in the surf zone and Atlantic bonito off the beaches.  Bluefish arrived a few weeks ago and were followed by Spanish mackerel.  King mackerel had been offshore all winter and the first of the coastal migratory group of king mackerel was caught from a pier in late April.

Boat fishermen had noted they were catching kings closer in and everyone knew it was only a matter of time before a pier king angler scored.  This usually happens first from one of the piers in Long Bay, between Oak Island and the S.C. state line sometime after April 15, but those piers were closed until this week.  Ocean Crest Pier is now open, but Oak Island Pier is not yet.  Pier fishermen were hopeful Oak Island pier, which is owned and operated by the Town of Oak Island would open after the Oak Island Town Council met on May 8, but it wasn’t discussed.

Maybe the first kings passed by the Long Bay piers earlier and didn’t stop because no fishermen had baits in the water.  That makes good sense as we wouldn’t stay around a restaurant that wasn’t open.  Still, the first pier king was caught in April, on April 29, when Hiro Nguyen scored with a 19-pound king caught from Johnnie Mercer’s Pier in Wrightsville Beach.  Kure Beach Pier reopened on May 2 and Chris Ammons landed their first king, a 24 pounder, on May 5.  The wind has been blowing since then and the water muddied up, but it will clear again and the next pier king catch could come at any time after that.

Just for the record – actually three records, this early run often holds large kings.  The record for Oak Island Pier is a 50 pounder that was caught on April 15, 2002, by Chuck Huthmacher.  The pier was still known as Yaupon Beach Pier then.

The record for Ocean Crest Pier is a 53 pound, 6-ounce king caught by Bo Crump on May 7, 1998.  Until about a decade ago, Long Beach Pier was the third pier on Oak Island.  The record there is 53 pounds, 3 ounces, and was caught by Kathy Davis on April 27, 1991.  With Long Beach Pier now gone and replaced with beach houses, Davis’ pier record will continue to stand.  It is also still standing as the IGFA Women’s 16-pound line class record for king mackerel.  An interesting side note is that Crump gaffed Davis’ king.

Pier king fishermen are a unique group, with specialized equipment.  Their setup requires two rods and reels.  One, called the anchor rod, holds the live bait in place so it doesn’t tangle with others, and the other is used to fight the fish.

Watching a fisherman subdue a king or other large fish from a pier is a treat.  If the king runs along the pier the fisherman has to move over and under other rods to prevent tangling and this creates a sort of dance sometimes referred to as the pier end or king mack two-step.  Fishermen get excited and every now and then there needs to be a blip for exciting language – especially if one gets away.  Most piers have the end dedicated just for king fishermen and don’t allow other fishermen or onlookers in the last few feet.  Even if a pier doesn’t designate this, don’t try to look so close as to be in the way!  That is a big no-no.

Fishing for Spanish mackerel doesn’t require the special equipment needed for catching kings.  This is cast and retrieve fishing anyone can do.  The rod and reel is typically a mid-weight outfit, say a 3000 or 4000 size spinning reel and a medium weight rod, usually 6 1/2 to 7 1/2 feet long.  This can have monoline of 10-15 pound test or braided line of 10-20 pound test.  This terminates in a short (2-4 feet) monofilament or fluorocarbon leader, with the lure on the end.

Fishermen’s favorite lures for Spanish macks vary greatly.  One of the most popular for years is the Got-Cha plug.  Fishermen debate the preferred color for the lures, but almost universally agree the hooks should be gold on a Got-Cha plug – and many days this does indeed make a difference.  Many other metal jigs from Clarkspoon, Sea Striker, Hopkins, and others will also catch Spanish.  They’ll also hit soft plastics, but their sharp teeth rip them apart quickly.

Sometimes Spanish give their location away by jumping as they attack schools of baitfish.  When this is happening, fishermen cast their lures toward the action.  When Spanish aren’t jumping, fishermen cast their lures as far from the pier as they can and retrieve them.  The retrieve is similar in either situation.  It is quick.  Spanish feed quickly and will catch any bait or lure they want.  Some fishermen also occasionally jerk their rod to make the lure dart.

Another technique popular for catching Spanish uses mackerel tree, Christmas tree or straw rigs.  These are multi-hook rigs that use pieces of straws or small rubber tubing slipped over the hooks for attractors.  Many fishermen use a Clarkspoon on the end if trolling or a metal jig when casting.  If the Spanish are thick, they can be cast short and jigged, often producing multiple strikes.  These rigs are longer and more difficult to cast, but can be cast and multiple strikes is not uncommon.  Multiple hooks are there for a reason.