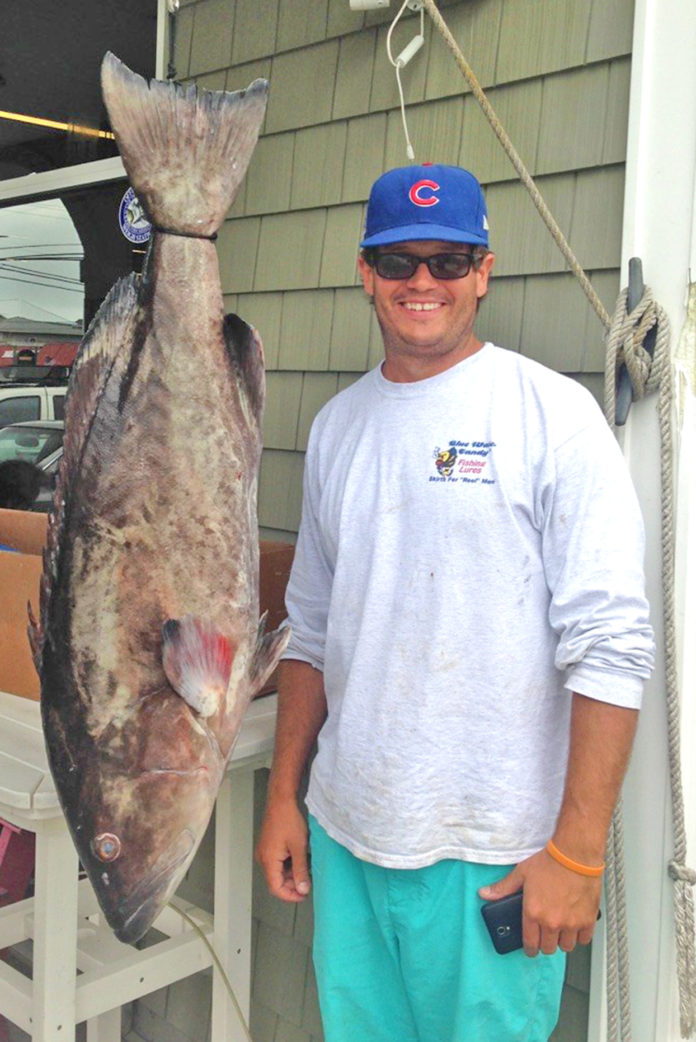 Breece Gahl of Wilmington describes himself as a novice grouper fisherman, but not many novices can claim a state record catch.  On May 20, Gahl hauled up a 47 pound, 6 ounce gag grouper that was recently certified as the new N.C. state record.  Gahl was hoping it was heavy enough to earn an outstanding catch citation and was surprised and thrilled to learn his catch had topped the former record by a pound and six ounces.

That fateful morning, Gahl headed offshore from Wrightsville Beach with his uncle, Corey Breece.  They were on Breece’s 28 foot Parker Sport Cabin heading for one of his favorite grouper holes approximately 30 miles offshore in 120 feet of water.  The 2017 grouper season had only been open a couple of weeks and Breece and Gahl were expecting to find lots of hungry grouper.

The bite didn’t begin immediately, but they waited patiently.  There were many smaller fishing pecking at their baits and Breece says sometimes it takes grouper a little while to get fired up and biting.  After a while the boat shifted a little on the anchor and the screen on the Garmin fish finder lit up with fish and bait on the rock..

“My uncle pointed at the fishfinder screen and told me to get ready,” Gahl said.  “It was only a matter of seconds after that when I began feeling something on my line.  It wasn’t an aggressive bite, but grouper bites can be really light.  This was just a subtle change in the line tension, like maybe a little tighter and heavier. I slowly dipped the rod tip down and reeled in the line to make it tight.  When I felt it again, I ripped the rod up in a sweeping arc over my shoulder.

“There was definitely something there and it immediately turned and headed back for the bottom,” Gahl said.  “We had locked the drag down on my reel and it was still pulling line.  I kept the rod tip up and tried to reel because I knew that if it made it back into the rocks, it could break my line or leader.

“After a while the grouper decided to move sideways and when it relaxed the full down pressure I got a little line in,” Gahl said. “This was the first time I thought I might get it in. It fought all the way to the surface and I had to pump and wind for every inch but finally I got it up. I breathed a big sigh of relief when I finally gaffed it and swung it over the rail into the boat.”

Gahl said he had caught some nice grouper previously, but nothing this large.  His first thought was that he had finally caught a citation size grouper and he was thinking the minimum size for a grouper citation was 40 pounds, not 20.

This was the first grouper of the trip.  It got Gahl excited and he was ready to get another bait back to the bottom.  He paused a few seconds to take in his big catch and then slid it into the fish box to continue fishing.  It would have been heavier, but it threw up a full size spiny lobster on the deck of the boat.

Gahl said he looked at the lobster and decided to use it for bait.  If they were eating lobsters and this one took his much smaller cigar minnow, he would use the regurgitated lobster and maybe catch one even lager.  That was a good thought, but didn’t quite work out as planned.

Gahl baited with the lobster tail and had a hard strike as soon as it reached the bottom.  It was a grouper, but a smaller one, and it had swallowed the lobster tail so he wouldn’t get another chance using it.  The good news was the grouper were getting excited and Breece had already caught several that readily hit frozen cigar minnows.  Gahl and Breece filled their limits and moved to another spot to add other bottom fish before calling it a trip.

Gahl carried the big grouper to Island Tackle and Hardware in Carolina Beach to be weighed for his citation.  This is when the person running the weigh station told him the minimum size for a grouper citation was 20 pounds, not 40 as he had been thinking, and his fish would easily exceed that.  When the scales settled at 47 pounds and 6 ounces, the weighmaster told Gahl he thought that was close to the state record.

“That put a little more excitement into it and we quickly looked up the state records page online,” Gahl said.  “The state record was 46 pounds and my fish was more than a pound heavier.  I went from being happy at catching my first citation grouper to being overwhelmed.  It was a complete surprise and a feeling that is hard to describe.

“I feel very lucky,” Gahl said.  “I’ve fished all my life, but I’m new to grouper fishing and still learning.  My uncle knew where to go and his fishfinder confirmed we were in the right spot on the rock.”

The previous record of 46 pounds had been set by Timothy Gallimore with a fish caught off Ocean Isle in 2011.  The certification process took two months, but Gahl said it was well worth it.

Gahl’s big gag was 48 inches long and had a 26 inch girth.  He caught it using a Penn Baja Special Senator Reel on a XX heavy Shimano Trevala Jigging Rod.  The reel was filled with Daiwa 120 pound multi- color braid, with a 130 pound Hi Seas fluorocarbon leader and a Mustad 3X Demon circle hook.  The big gag gulped down a frozen cigar minnow.  Gahl said he likes using frozen cigar minnows as they stay on the hook better and hold up to the pecks of all the bait thieves on the bottom.