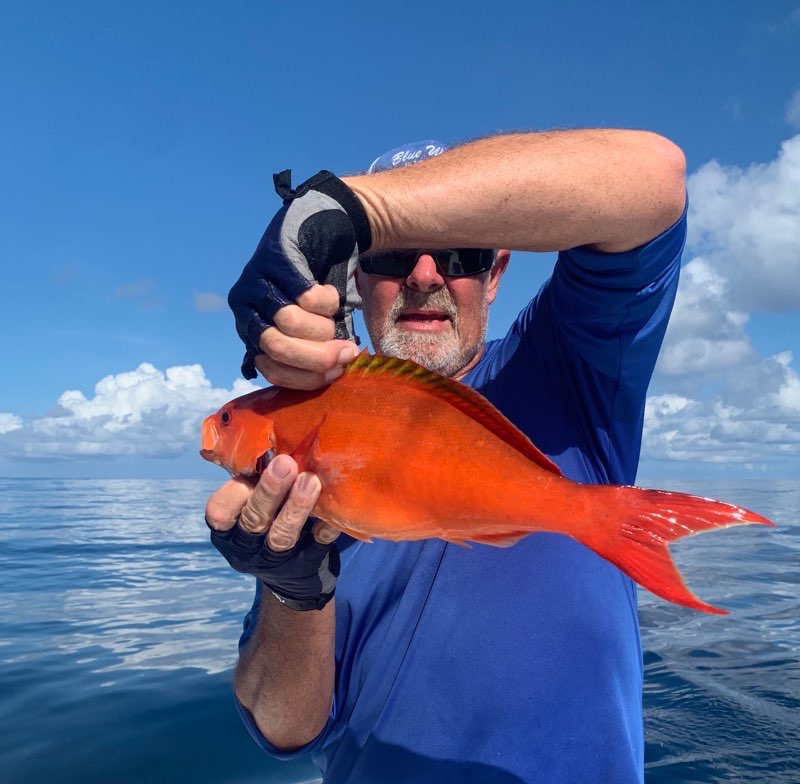 It’s rare to leave the dock thinking you may break the world record and Craig Thompson wasn’t thinking that on a recent trip with long time fishing buddies Capt. Hiroki Toma, Bob Timson and Phil Moseley on Toma’s boat Matias.  He certainly wasn’t thinking he would break the record for a fish he had never heard of until after he caught one – but that’s just what he did on September 1.  Thompson caught a 2.14 pound creole fish and it has been submitted to the International Game Fish Association (IGFA) to break the existing record and to the N.C. Division of Marine Fisheries to establish a state record for the species.

The fishermen are all members of the St. James Fishing Club and often fish together in the waters offshore of Cape Fear.  On September 1, they departed St. James Marina, near Southport, early to escape the heat.  They were headed to the inshore edge of the Gulf Stream to troll for wahoo, blackfin tuna, dolphin and whatever else might bite.

They also had a Plan B.  This was to stop on the way in and bottom fish for grouper.  As is often the case when fishing, Plan B was more productive than the initial plan.  While fishing the bottom, Thompson reeled in the pending world record creole fish (Paranthias furcifer, also called Atlantic creole fish) that is also potentially the initial N.C. state record for the species.

“We knew the water was still pretty hot and the offshore fish would be scattered, but wanted to go fishing,” Thompson said.  “The weather and sea state forecast was good, so we made a plan to head to the edge of the (Gulf) Stream and troll.  We had heard the fall wahoo bite was already picking up a little farther north and were wondering if they might also be arriving down our way.  We were hoping to pick up a few wahoo and maybe some blackfin tuna and dolphin.  Our backup plan was to stop on the way back in and bottom fish if trolling either wasn’t good or was very good. This is a standard fishing plan with us and we do it often.

“On that day trolling wasn’t good,” Thompson said.  “We couldn’t get on a bite.  After trolling for about 5 hours, we got our only bite and landed a nice wahoo.  This spurred us to troll a little longer, but it just wasn’t happening.  We were near the Steeples in about 200 feet of water, with some good bottom showing on the scope, so we brought in the trolling spread and dropped to the bottom for grouper.”

“We had stopped on the way out and jigged a mixture of live baits, so we felt pretty good that we should catch fish on the bottom,” Thompson said.  “After two drifts we were beginning to wonder about that too, but we worked back up current for a third.  On the third drift we got on the fish better and landed three nice scamp grouper, some smaller fish and missed a few bites.

“During that third drift, I had a strike that felt like a grouper at first, but its resistance slowed pretty quickly once away from the bottom,” Thompson said.  “When I first saw it, I thought it might be a beeliner, but it was too dark red.  It wasn’t a red snapper either.

“We checked the FishRules App and internet as well as we could 50 miles offshore, but no one found a picture to identify it,” Thompson continued.  “Since it was about a foot and a half long and none of us could find it as a prohibited species, we made the decision to keep it.  On the way in, one of the guys mentioned that he had heard something once about a species of fish that looked a lot like beeliners and was called creole fish.  As soon as we saw the picture, we were sure that is what it was.”

Once back at the dock, Thompson declined to clean the fish and wrapped it in plastic to store overnight.  He did more research on creole fish and found the current word record was only 1.8 pounds.  This got him excited as his fish bounced between 2.1 and 2.2 pounds on hand held digital scales.  The next morning Thompson called the International Game Fish Association (IGFA) and their representative encouraged him to submit a world record application. 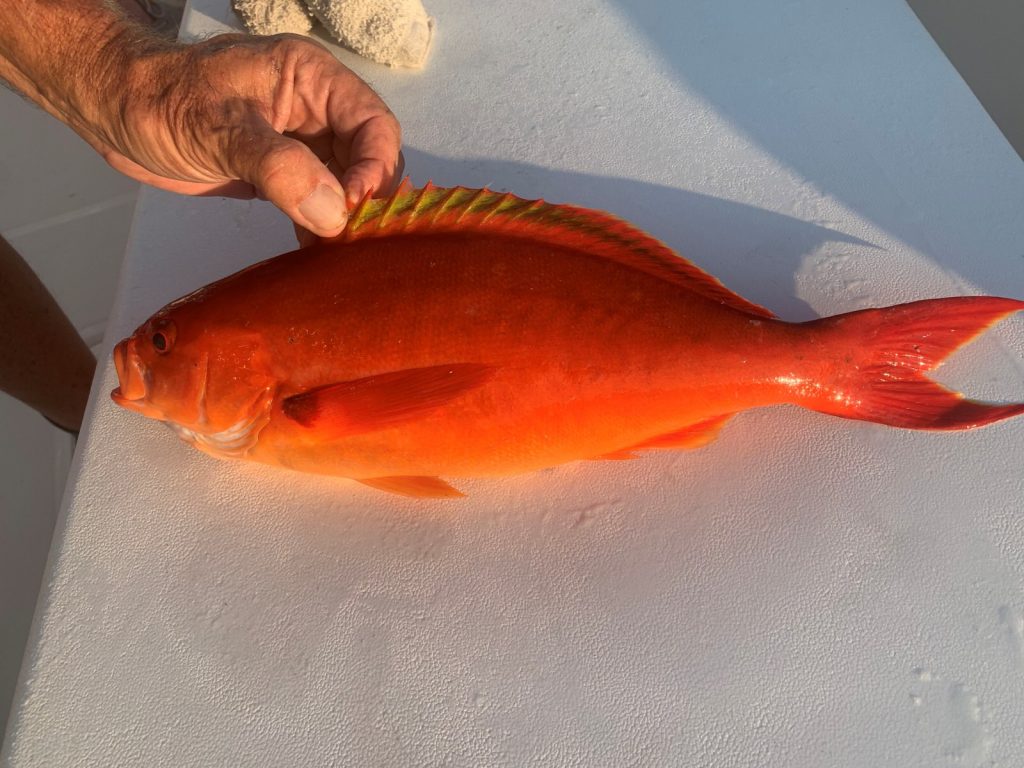 Thompson weighed the creole fish on two sets of scales to be sure.  The scales at Wildlife Bait and Tackle in Southport are certified for the N.C. Division of Marine Fisheries Citation and State Record program and Ocean Isle Fishing Center in Ocean Isle Beach is an IGFA listed weigh station.  The fish weighed 2.14 pounds on both scales and this is .34 pounds heavier than the current IGFA world record.

Thompson caught the fish on a live cigar minnow fished on the bottom in 200 feet of water. He was using a 6 foot, 6 inch Shimano MH Trevala Jigging Rod and an Avet SX 6/4 reel spooled with 50 pound test Power Pro braided line. The rig was made from 100 pound test Ande monofilament and used an in-line circle hook.

Most fishermen wouldn’t consider this to be a large fish, but it is huge for a species where most individuals are less than a foot long.  Thompson’s creole fish measured 17 1/2 inches long and 10 1/4 inches in girth.  He estimates reeling it from the bottom took about 4 minutes.  At first glance it most closely resembles a vermilion snapper (aka beeliner), but is a much darker red, with pointed tail ends and yellow tips on the dorsal fin and tail.  It looks like it should be a snapper, but is actually in the grouper/sea bass family.

Creole fish are not common catches off the N.C. Coast. They are caught more frequently in the tropical Atlantic and occasionally to Bermuda.  One web report said they taste very good and make excellent sushi.

Tar Heel fishermen have seen more and more species once considered tropical moving northward during the past decade or so.  This has been especially true in the unusually warm water this year.  Tripletail have become a regular summer visitor both in the ocean and the lower Cape Fear River between Southport and Carolina Beach.  There have been several permit caught each year for a handful of years, plus scattered reports of bonefish and snook catches.  The offshore arrival of creole fish could be similar to lionfish, which were rare only a few years ago and now dominate many reefs and wrecks.

Thompson’s creole fish is now a pending world record . All the paperwork, pictures, line sample and hook were mailed to the IGFA on September 4.  Thompson said he will also submit his creole fish catch to the N. C. Division of Marine Fisheries in hopes of establishing the state record for the species.