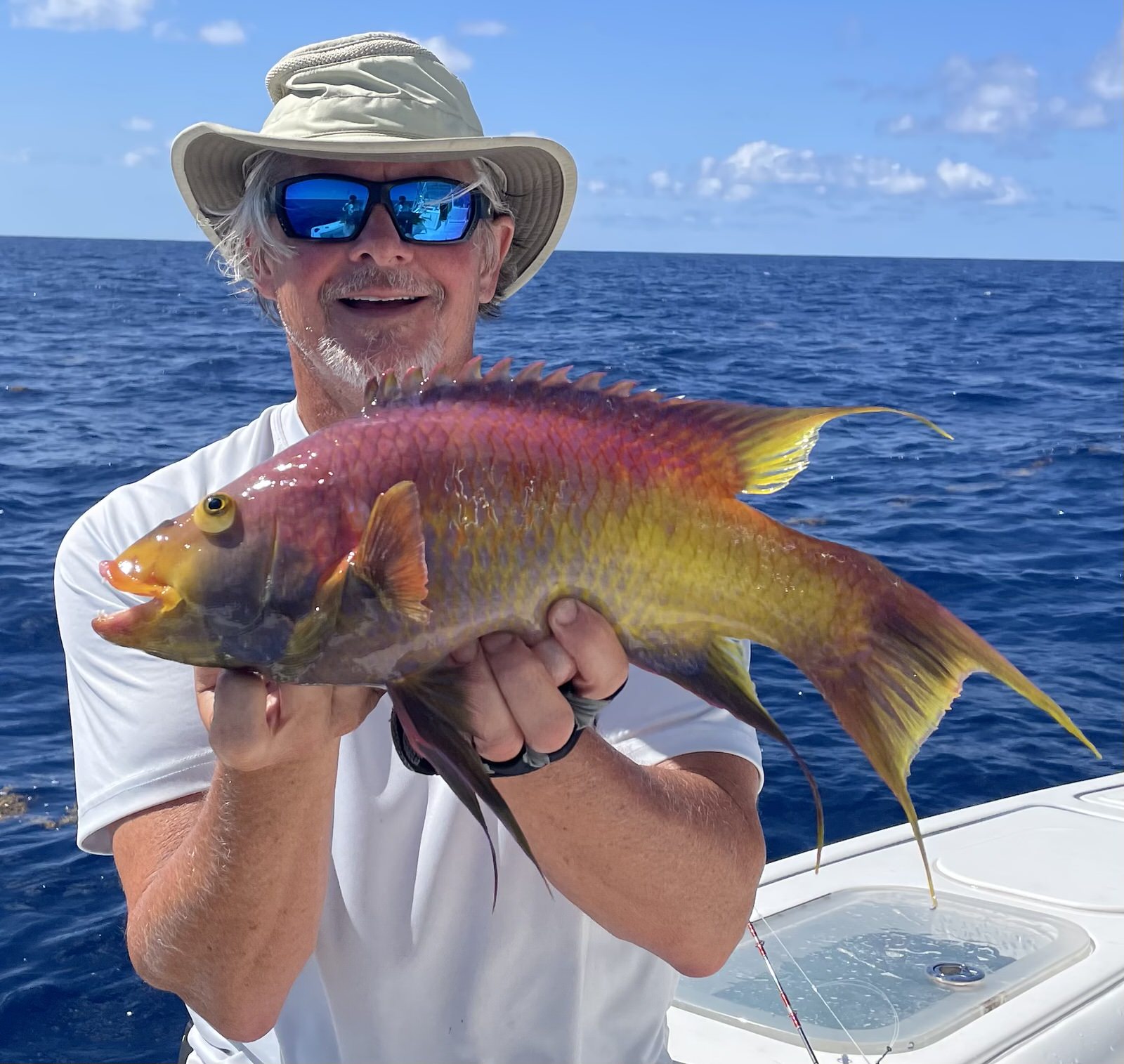 Not many fishermen leave the dock in the morning thinking they might catch a world record fish, but fishermen enjoying a day on the water with Capt. Hiroki Toma on Matias might begin to consider it more likely to happen.  Yes, fishermen who are friends of Toma have landed two world records on his boat Matias in less than a year.  Craig Thompson did it on September 1, 2020 and now DFr. Bob Timson has received a certificate from the International Game Fish Association (IGFA) that the Spanish hogfish he caught while fishing with Toma on July 17, 2021 has been accepted as the new world record for the species.

July 17 didn’t feel special as Timson dressed and drank a cup of coffee before heading to St. James Marina to meet Toma and friends for an offshore bottom fishing trip, but it would before the day ended.  The mood on Matias was jovial as the fishermen made the 55 mile run from the Cape Fear River to 200-250 feet of water offshore of Frying Pan Light Tower and it should have been.  Capt. Toma has a great track record of finding fish and this group was planning to jerk a few grouper jaws that day.

They caught some nice grouper, but they weren’t the highlight of the fishing trip.  That honor belonged to a small green fish that only weighed 2pounds and 11 ounces.

The fishermen had caught a few grouper and other tasty bottom fish when Timson reeled in an unusual looking fish that was mostly green, but very colorful.  At first everyone thought it was a parrotfish and went back to fishing.  However, something didn’t look quite right to Timson and he didn’t think the unusual fish was a parrotfish.  However, they were about 55 miles offshore and way too far from land for his cell phone to connect to the Fish Rules app and positively identify the unusual fish.

The target for this trip had been to go offshore beyond where most bottom fishing boats stop and catch some grouper that hadn’t been overly harassed.  The other fishermen were reeling in a few, but Timson wasn’t connecting like he usually does.  However, it was his day for unusual fish and in addition to the fish in question, he landed a greater soapfish and a spotted scorpionfish.  The fishermen questioned that the suspected parrotfish and these two were fish that were usually considered to be in more tropical waters, but noted the local waters had been warmer than usual this summer and left it at that – except for Timson.

After a day of fishing and catching a bunch of fish they headed in.  Timson’s cell phone picked up service while still a few miles offshore, so he began a search for the fish. He had been correct; it wasn’t a parrotfish, but a Spanish hogfish.

This made Timson even more intrigued as he had only seen small Spanish hogfish in aquariums and had never heard of a large one.  Looking further he realized his was a large one.  The current world record was listed as 1 pound, 8 ounces and even on the rocking boat his scales continued to show his fish’s weight as above 2 pounds.

Once back at the dock, Timson showed the fish and the online picture to his friend Craig Thompson, also of Southport and also an IGFA (International Game Fish Association) world record holder, and Thompson agreed it was a Spanish Hogfish.  Once the fish was buried in fresh ice to preserve its weight, Timson and Thompson checked online to find an IGFA certified scale in the area.  There were two locations listed, but one said their scale was temporarily broken.  The other IGFA certified scale was at Island Tackle and Hardware in Carolina Beach and it was set up and ready.

It was too late that day, so Timson made the drive from Southport to Carolina Beach early the next day to weigh his catch on the IGFA certified scales at Island Tackle and Hardware.  When the scale settled, his catch weighed 2 pounds and 11 ounces.  This was a pound and three ounces heavier than the current record.

“We were fishing in 200 to 250 feet of water offshore of Frying Pan Tower when the fish hit,” Timson said. “There really wasn’t anything special about the fight, except that once near the surface it got a burst of energy and pulled some drag. We had been catching larger fish and were a little surprised at this, but some offshore bottom fish save a burst for when near the boat and we didn’t think anything of it.

“It hit a crab that one of the other fish had regurgitated,” Timson said. “The crab was laying on the deck and looked good, so I put it on the hook and dropped it back down. That apparently was the right thing to do.”

Timson was fishing with a rod he had custom made for deep water bottom fishing that was topped by an Accurate Valiant 30 reel loaded with 30-pound test Suffix 832 braided line. The 2-pound, 11-ounce Spanish hogfish was 15 inches to the fork of its tail, 18-inches overall length and had an 11-inch girth.

Timson said he had not yet submitted the fish to the N.C. Division of Marine Fisheries as a potential state record, but would now that the world record had been recognized.  In the near future, Timson’s Spanish hogfish should also be recognized as the N.C. record for the species.

Timson’s Spanish hogfish is the second world record caught in less a year by fishermen fishing with Capt. Toma on Matias.  Craig Thompson caught the other, a creole fish, on September 1, 2020.  Timson, Toma and Thompson are all friends and members of the St. James Fishing Club that fish from St. James Marina, near Southport.  Congratulations to Timson and Toma and another pat on the back to Thompson for his record catch last summer!