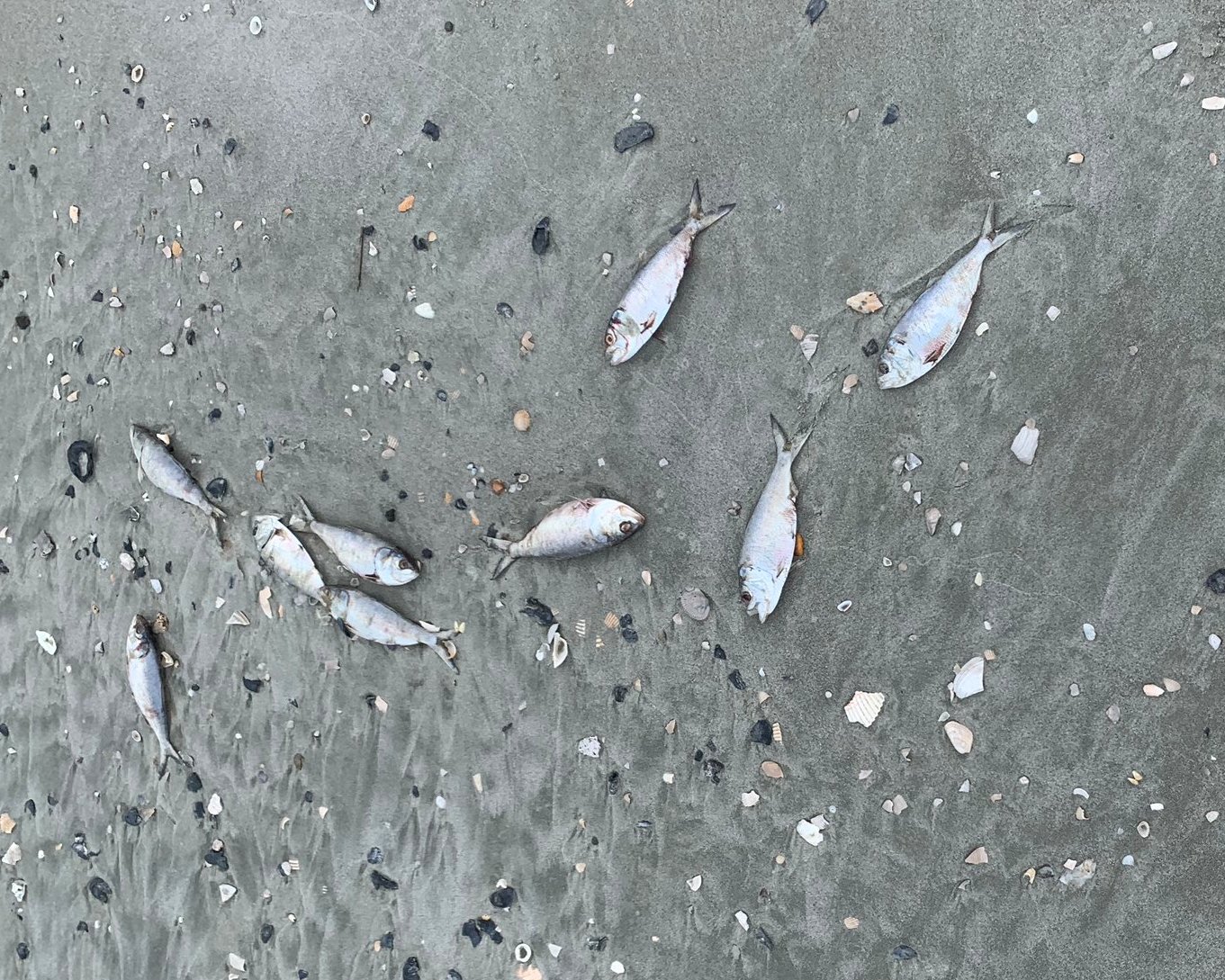 Beachgoers from Myrtle Beach, S.C. to Ocean Isle Beach, N.C. were greeted several mornings last week with dead menhaden, locally called pogies, that had washed up on the beaches north and south of the N.C./S.C. state line.  The dead fish began appearing after high tide on Sept.10.  They were thick in some places and more spread out in others.  However, the smell of the dead fish decaying was anything but pleasant regardless of how many there were. 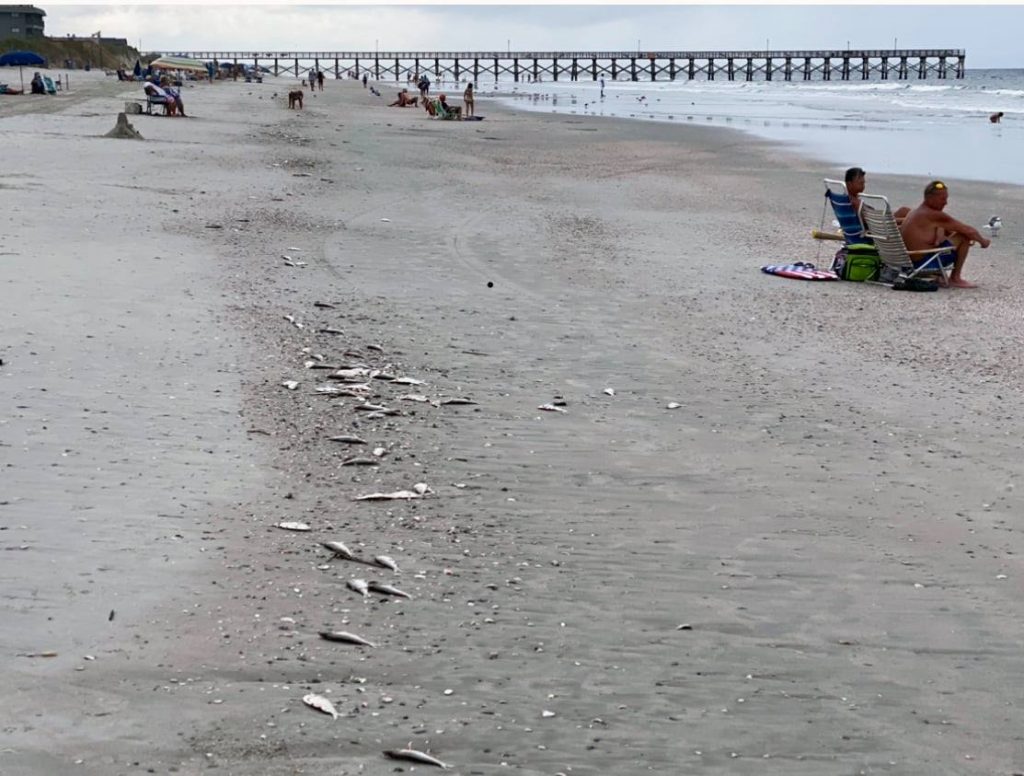 Officials in the beach towns wanted to remove the fish as quickly as possible, but had to wait until state health and fishery officials could arrive to take photos and gather samples.  The beaches were mostly clean by the weekend.

However, the question that won’t go away and no one has an answer for – at least not yet – is what caused this?  There hasn’t been an ocean menhaden kill in many years and the last one was off N.C. when lines on a commercial purse seine broke.  Fisheries biologists and health researchers are trying to find the source and reason for the dead fish washing ashore.

Atlantic Menhaden are a foraging fish that feed off phytoplankton and zooplankton, according to the National Oceanic and Atmospheric Administration.  They can live up to 10 years-old, reach up to 15 inches when fully-grown, and weigh up to a pound at maturity.  They are reduced to oil and meal for use in fertilizer, animal feed, bait, and both human and animal supplements.

Patricia Smith, Communications Director at the North Carolina Division of Marine Fisheries, said there is no indication of a water quality issue.  Smith said a Marine Patrol Officer responded to the site that Thursday and took samples for biologists to test.  No lesions or markings were found on the fish that would indicate a water quality problem, and algal blooms in the ocean are very uncommon.

Smith said, “The fact that only one species was observed suggests that depletion of dissolved oxygen or presence of toxic compounds were not the cause.  There are other factors that could cause fish to wash ashore in this manner including: bycatch from a nearshore fishing operation pushed to shore by wind of tide or nearshore predation by bottlenose dolphin or other large species.”

In a South Carolina report, Joey Ballenger, S.C. Department of Natural Resources Assistant Marine Biologist said, “It seems to be the only species that was effected is Atlantic menhaden.  Menhaden are a common, schooling fish all the way up and down the Atlantic Coast.”

Ballenger said when he saw pictures of the issue, his first thought was to check the dissolved oxygen in the water.  However, he added that if it had been a dissolved oxygen issue, there’d likely be more than one species affected.

Ballenger said he didn’t know what caused it, but wonders if it could have been a trawler or fisherman offshore interacting with a big school of menhaden.  There could have been a mortality event associated with that and then they washed to the shore.

Menhaden are caught in purse seines commercially and in cast nets by fishermen seeking them for bait.  Some are also caught in shrimp nets as bycatch.  The one remaining menhaden processing plant is in Reedville, VA, in the Chesapeake Bay.  The last time menhaden washed ashore on ocean beaches in these numbers it was a spill from a commercial menhaden boat, but since then a law has been enacted holding menhaden boats 1 1/2 miles off the beach in Brunswick County, NC and the last N.C. processing plant has closed.  .

Some past menhaden kills in inland rivers were spurred from water quality issues, most commonly oxygen depletion when the water was at its warmest during the summer.  The Coastal Ocean Research Monitoring Program (www.cormp.org) temperature monitors in the areas were showing 83 degrees at the time this happened and had been several degrees warmer earlier in the summer.  South Carolina has dissolved oxygen monitors at Cherry Grove and Apache piers and those did not show levels low enough to cause a kill.

The most recent fish kill incidents in N.C. were inshore, not in the ocean, included multiple species of fish and were usually associated with an algal bloom.  Algal blooms are rare in the ocean and none have been reported.  The menhaden in those situations had sores and lesions on their bodies while these did not.  It is also rare that in a situation of poor water quality or the presence of toxic compounds that only one species of fish would be affected.

With water quality tentatively removed as the cause of the dead fish washing up on the beaches, speculation includes the possibility of an unwanted catch that was released and didn’t survive or multiple attacks of large predators, like a school of bottlenose dolphins, that killed more than they ate.  The N.C. Division of Marine Fisheries and the S.C. Department of Natural Resources have gathered samples of the fish and are investigating the incident.