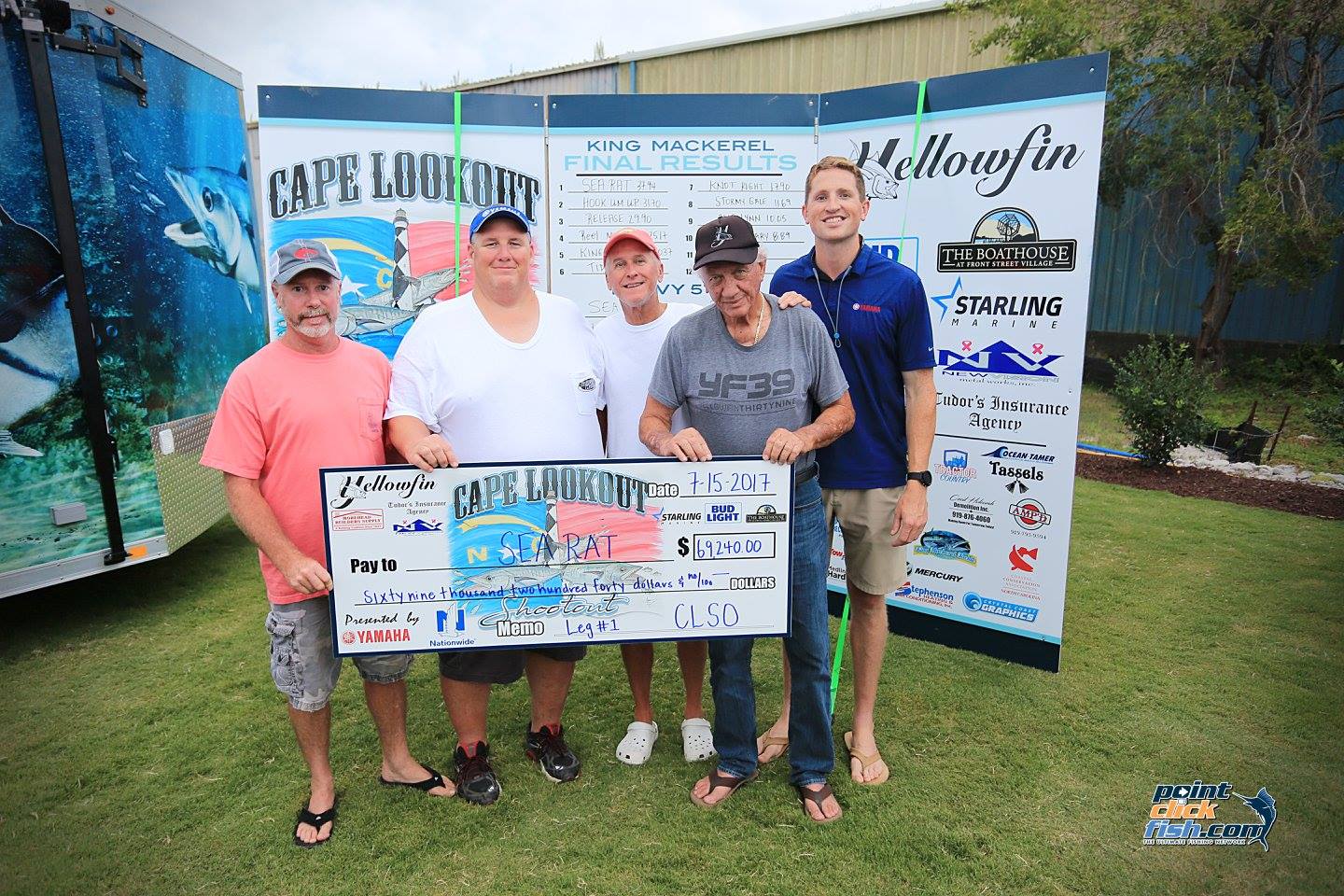 The first tournament of the 2017 Yellowfin Cape Lookout Shootout King Mackerel Series presented by Yamaha and Nationwide Insurance was held Saturday, July 15, from The Boat House in Beaufort.  While dealing with far less than favorable sea conditions, the Sea Rat Fishing Team of Capt. Mitch Yates, Midway, with teammates Richard Williams  and Ronnie Miller of Wilmington caught a 37.94 pound king to secure the win and punch their ticket to the 2017 Cape Lookout King Mackerel Series Championship to be held in November.

“We had planned to make a long run to the south but didn’t have bait, so we decided to stay close by and spend more time fishing.  We hopped the (Cape Lookout) shoals and fished to the east.

“The wind was blowing 20 knots from the southwest and conditions were bad, but we were going to stick it out,” Yates said.  “There were a few boats around us. We saw a few kings get caught, but it wasn’t happening for us.

Finally, late in the day, we got the bite we needed and landed this fish.”

The Hook Um Up crew, led by Capt. Wayne Howard of Wilmington, was the only other team to weigh a king surpassing 30 pounds.  They claimed second place and a $13,000 payday for their 31.70 pounder.  Capt. Mike Williams and the crew of the Release barely missed adding another 30 pounder at 29.90 but still claimed third place and $21,000 in prize money.

In the nasty sea conditions, only 10 of the 60 boat field weighed fish.  All the teams fished hard, but the conditions affected the fish as much as the fishermen, and bites were tough to find.  The results for places 4 through 10 were:

Ross Pennington, who fished with his dad and uncle on the Proud Mary, was the Top Youth Angler for the tournament.

There are multiple tournaments within a tournament for fishermen willing to risk more entry fees.  Fishermen are required only to enter the primary tournament, and the TWTs are optional.  All fishermen do not enter every TWT. This is the reason for some disparities in the prize money. The Cape Lookout Shootout Series has just passed an impressive 1 MILLION dollars in total payouts since 2014. To date, the series has paid out $1,082,426 (not including junior, senior, and lady prizes).

Participation in the Cape Lookout Shootout Series is limited to 60 boats. Half the field will qualify for the championship tournament.  All tournaments and the championship are held from The Boathouse at Front Street Village in Beaufort, N.C.  The Captains Meetings are held Friday evenings, with fishing scheduled for Saturday and Sunday reserved as a backup day.

The second 2017 tournament is scheduled for September 8-10, with the third on October 13-15 or November 3-5 and the championship tournament on November 17-19.  For more information visit www.capeshootout.com.