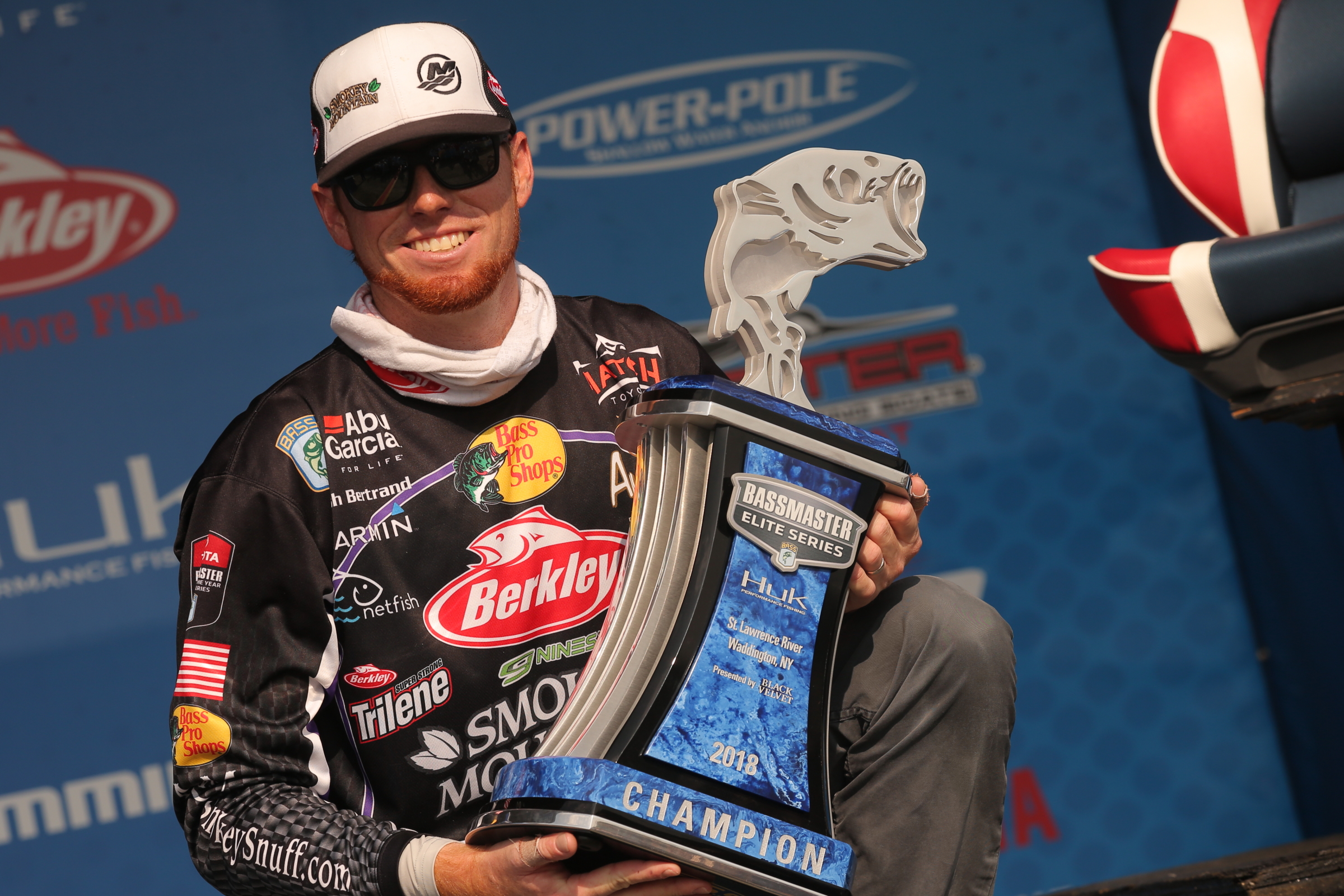 Bertrand’s four-day total was 95-3, which earned him an impressive $100,000 payday in the Huk Bassmaster Elite at St. Lawrence River presented by Black Velvet and valuable Toyota Bassmaster Angler of the Year points.

The derby was the final regular-season event before the Top 50 pros in the points race advance to the AOY Championship at Georgia’s Lake Chatuge in mid-September.

Bertrand will begin the championship in second place in points, but taking home the coveted blue Bassmaster trophy at Waddington is a great way to cap off an extraordinary season.

“It’s hard to put into words how I feel right now,” he said. “I am so happy to have finally won one of these, and I’m excited to extend my season into the AOY Championship. But right now I’m going to let this victory sink in.”

The 29-year-old angler said the fishing on Championship Sunday was tougher than the previous three days.

“As it usually does, things were more of a struggle today, despite weighing over 23 pounds,” Bertrand said. “The key for me was confidence in my presentation. All week I’ve been catching my fish on a Berkley MaxScent Flat Worm, and I knew it was going to keep on producing — I just had to stick with it until the final minutes.”

That’s exactly what he did, and it paid off big time.

“The business end was a No. 1 Berkley Fusion19 drop-shot hook above a 3/8-ounce drop-shot weight,” Bertrand said. “The baits were a 3-inch Gulp! Minnow in an emerald shiner pattern, and the 4-inch Berkley MaxScent Flat Worm was in a green pumpkin color. I can’t say enough about how effective those two presentations were this week.

“My main pattern was drifting rock humps with the river current,” he said. “Most of my fish came from [depths of] 40 to 50 feet, and that program held all week. On the final day it was critical to fish some fresh spots I had checked out during practice.”

Second by less than a pound was Justin Lucas of Guntersville, Ala., with 94-6. He and Brandon Lester of Fayetteville, Tenn., each brought in heavy, 24-3 limits, but Lester finished third with 94-1; David Walker of Sevierville, Tenn., the leader going into Championship Sunday, fell to fourth with 92-11 after weighing in a subpar 20-6 limit. Mike McClelland of Bentonville, Ark., with 90-1 for fifth place.

McClelland earned the Power-Pole Captain’s Cash Award of $1,000 for being the highest-placing angler who is registered and eligible and uses a client-approved product on his boat.

Brett Hite of Phoenix, Ariz., received $1,500 as the winner of the Phoenix Boats Big Bass award. He had the largest bass of the tournament with a 6-12 smallmouth on Thursday’s opening round.