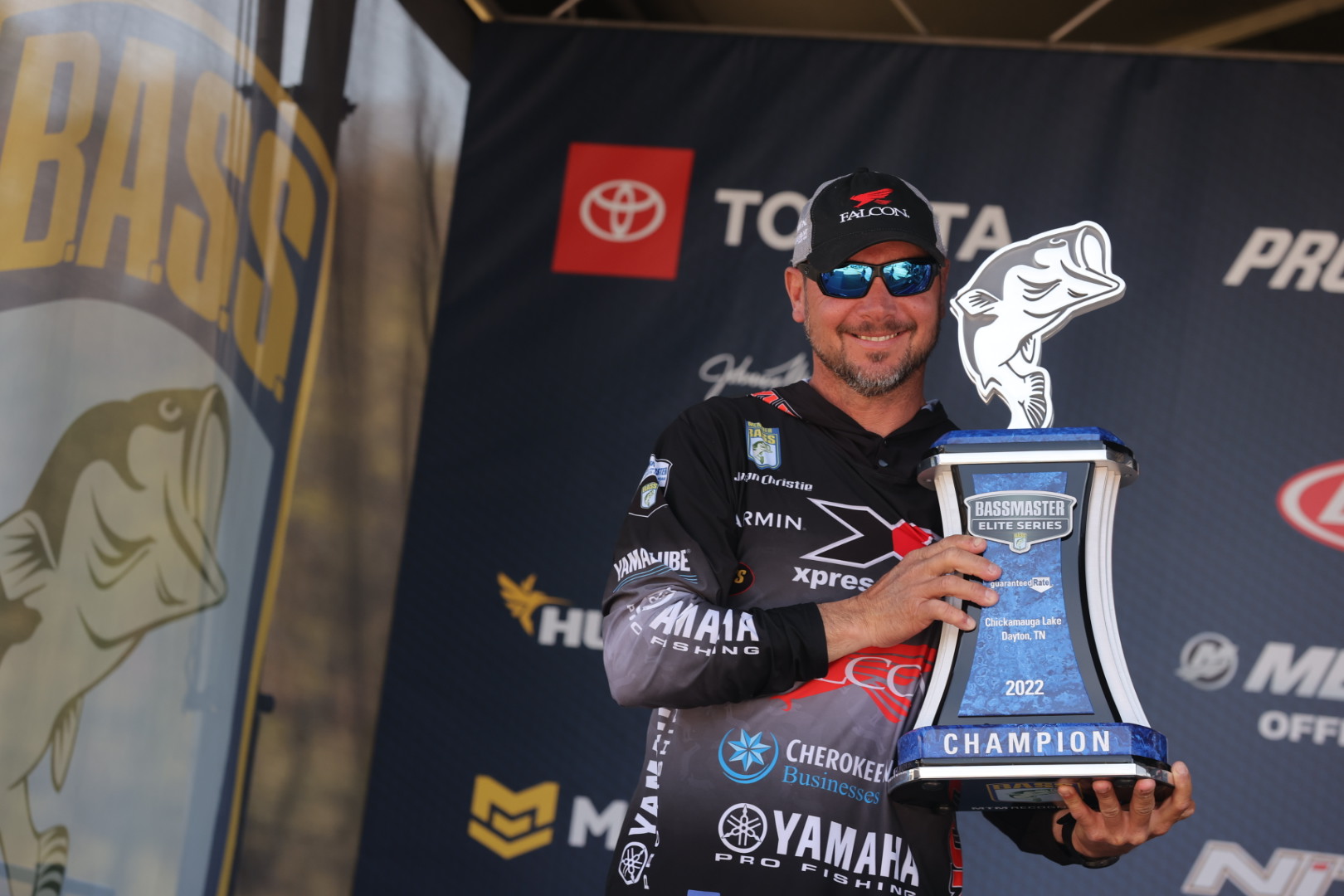 Jason Christie left Dayton Municipal Park on Championship Sunday just 6 ounces out of the lead with a crystal-clear plan for where he wanted to start.

But thick fog created by temperatures that had plunged into the 30s overnight changed that plan — and ultimately played a huge role in his eighth career victory with B.A.S.S.

To let the fog clear, Christie stopped on a bank he hadn’t fished all week and quickly put a solid limit in his livewell. He culled up a few ounces throughout the day until he reached a five-bass limit of 15 pounds, 12 ounces that helped him win the Guaranteed Rate Bassmaster Elite at Chickamauga Lake with a four-day total of 73-7.

“The fog is why I won,” said Christie, who is a little more than a month removed from winning the Academy Sports + Outdoors Bassmaster Classic presented by Huk on Lake Hartwell. “I went through one fogbank at about 25 mph going to where I was going to start. But then I hit another fogbank and I saw a boat wave that I knew didn’t come from one of our guys, so I just immediately peeled off to an area that I fished three or four years ago in another event.”

After a warm start on Thursday, Days 2 and 3 were the polar opposite with cloudy skies, temperatures in the 40s and a spattering of rain, sleet and snow. But the low-light conditions played into the hands of Christie, who fished all week with a 1/2-ounce Booyah Covert Spinnerbait (chartreuse, white and blue with a white Yum Swim’n Dinger as a trailer), a bladed jig and the same War Eagle Jiu-Jigsu Jig (green pumpkin) he used at the Classic.

The conditions made another sharp turn Sunday, with the return of the sun, calm winds and a high temperature near 70 degrees. But Christie once again took advantage of a short window of low visibility aided by the early morning fog.

“I knew the spot I stopped at had had a lot of traffic, but I figured I would just go in there and fish until the fog lifted,” Christie said. “But really it set up perfectly because it was shaded and had all the right stuff.”

While much of the field was still navigating the fog, Christie caught a quick limit, taking the unofficial lead on BassTrakk by 8 a.m. and never relinquishing it.

“That was the key, just getting off to a good start,” he said. “What was weird is every day those fish have been tight to cover. But the first big one I caught today was halfway back to the boat. Then the next bite was about the same — and that’s how I ended up catching them.

“I think the bait would come by the cover, and they were sitting right out in front of it.”

The win provided a bit of redemption for Christie, who followed his Classic victory with a 93rd-place finish at the next Elite Series event at Santee Cooper Lakes — one of the worst finishes of his career. He said the same stubbornness that cost him at Santee Cooper Lakes might have helped him to the victory on Chickamauga.

“I certainly don’t like to make excuses,” he said. “But during practice for Santee, I was doing every interview, every podcast about the Classic win — I didn’t turn anyone down. I still thought I was on a good deal there and that I would catch them. But I was too stubborn to give up on it when it didn’t work.

“That’s just like today. The fishing was a lot tougher than it had been the last two days, but I stuck with what I was doing.”

Like Christie, Mississippi pro Brock Mosley stayed with the program he had been using all week, alternating between a bladed jig, a jig, a Senko and a spinnerbait. But with a modest limit of 11-14, he finished second with a four-day total of 69-15.

It marked his fifth career second-place finish on the Elite Series and the third time he’s finished one spot behind Christie.

“I caught plenty of fish today, but I just didn’t run into any big fish,” Mosley said. “I thought as good as I was catching them, everybody else was probably catching them too. So late in the day, I decided to run down the lake and try to catch a couple of big ones on a big swimbait.

“Looking back, I probably should have just stuck with what I was doing.”

Hawaiian Matty Wong failed to make the Top 10 cut for Championship Sunday, placing 14th with 48-5. But he earned the VMC Monster Bag of the Week award for the 25-13 limit he weighed in Friday.

As part of the Yamaha Power Pay program, Christie also earned $4,000 for winning while Australian Carl Jocumsen claimed an additional $1,500 for being the second-highest placing entrant.

With a 33rd-place finish, Florida pro John Cox maintained his lead in the Progressive Insurance Bassmaster Angler of the Year standings with 353 points. Idaho pro Brandon Palaniuk moved into second with 343, followed by Pirch (338), David Mullins of Tennessee (321) and Drew Benton of Georgia (321).

The tournament was hosted by Rhea County, City of Dayton, Tenn., and Fish Dayton.

TeamPCF - May 21, 2022
Atlantic Beach, NC - If you have been following the Atlantic Beach, North Carolina Cobia run you saw that last week angler Chris Conklin weighed-in...