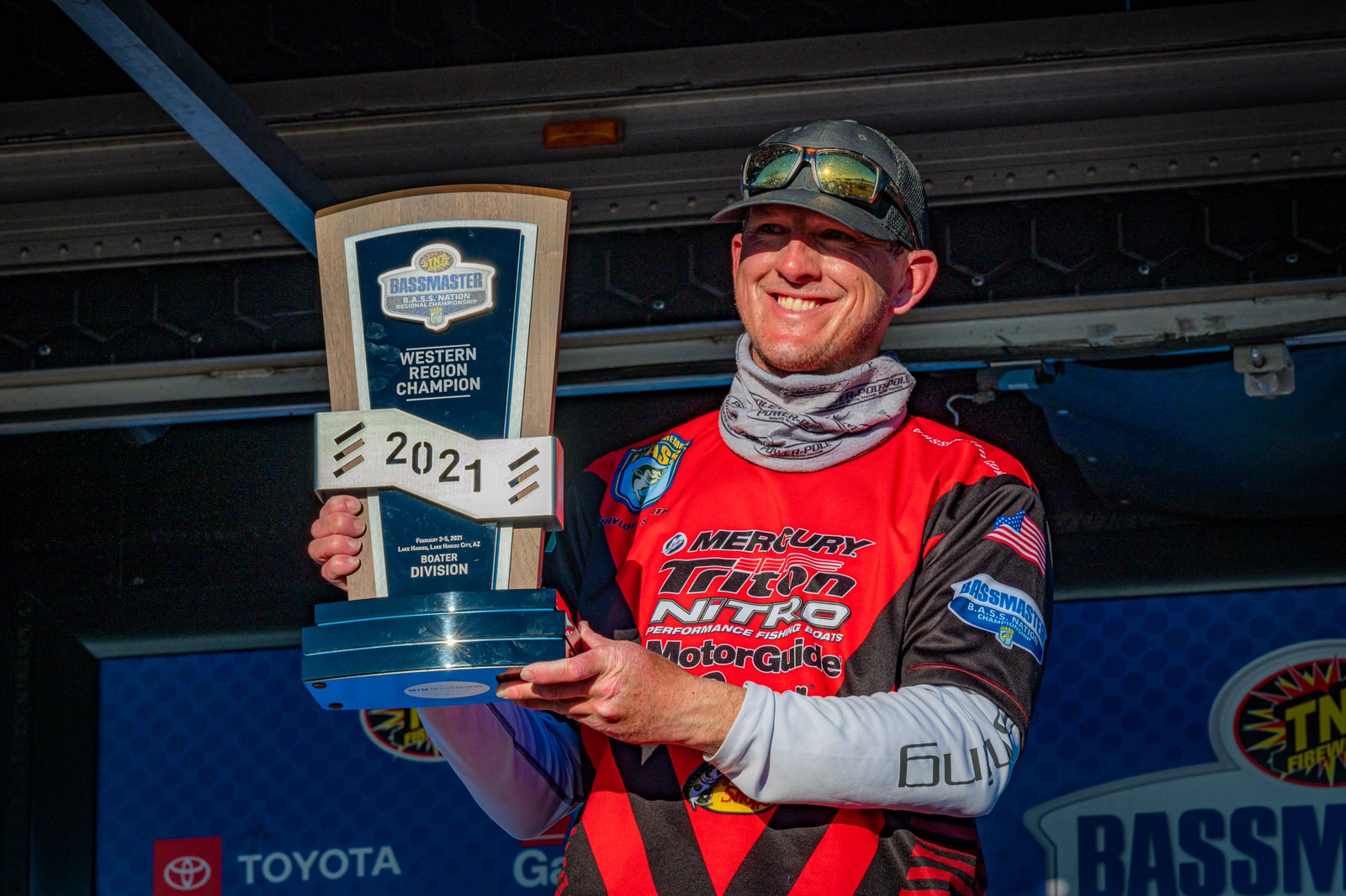 Taylor Smith caught only five bass on the final day of the TNT Fireworks B.A.S.S. Nation Western Regional at Lake Havasu, and it was the final bite that gave him the weight he needed to win the season-opener on the 2021 B.A.S.S. tournament schedule.

Smith hooked a 5-pound largemouth a few dozen yards from the Lake Havasu State Park weigh-in site with only 45 minutes of tournament time remaining on Friday. The catch rounded out his 15-pound, 13-ounce limit and added to his 18-2 limit on Day 1. Smith finished with a two-day total of 10 bass weighing 33-15.

The 35-year-old Valleyford, Wash., resident won $5,000 for topping the boater division. It was part of a $27,200 total purse split between the best of the 177 competitors this week on the 19,200-acre impoundment straddling the Arizona/California border.

Smith is no stranger to success in B.A.S.S. Nation events. He finished second in the Nation Championship at South Carolina’s Lake Hartwell in 2019, which qualified him for the 2020 Academy Sports + Outdoors Bassmaster Classic presented by Huk held on Alabama’s Lake Guntersville.

Smith’s win at Lake Havasu qualified him for the 2021 Nation Championship, which will be held later this year at a location to be determined.

“I’m jacked,” he said. “It was such a fun time down here. I didn’t have very high expectations. My pre-fishing was terrible. So, I’m elated. To have another chance to fish for a berth in the Classic is unbelievable.”

Smith was in second place after Day 1 on Wednesday, trailing only California’s Matty Wong, who led with 18-8.

That’s how standings remained Friday, as Thursday’s competition was canceled due to strong winds in the region. B.A.S.S. officials determined the full field would fish again on Friday, and Mother Nature cooperated with postcard-perfect weather — winds at a much tamer 10 mph, bluebird skies and temperatures in the low 70s.

Still, Smith struggled to find bites Friday. His luck changed with the 5-pounder he caught on a green pumpkin football-head jig outfitted with a blue trailer.

“I yelled so loud when I caught that fish, I’m surprised you didn’t hear me up here (at weigh-in),” Smith said of his big catch. “But other than that, it really was a grind out there today.

“A lot of people had fish follow a jerkbait or a spinnerbait (on Wednesday), but I think that just slowly went away. I couldn’t get any kind of reaction bite today.”

“The wind yesterday changed things for me, so I feel lucky to catch what I did,” he said. “I didn’t think I had (as much weight as I did).”

Steve Lund, who was in fourth on Day 1, climbed to second overall with a two-day total of 32-2. The Glendale, Ariz., resident caught a 16-1 limit on Friday, which was the heaviest bag of the day. Wong finished third with 28-5.

Jay Evans of Missoula, Mont., won the $500 Big Bass Award with a 6-pounder he caught Wednesday. Scooter Griffin of Hayden, Idaho, caught a 4-12 bass Friday to win the $250 top prize for big bass among co-anglers.

JJ Gibbs IV, who lives in Lake Havasu City, won the Garmin Tournament Rewards prize of $500. He finished fourth in the boater division with a two-day total of 26-3.

The leading angler and co-angler for each state team at the Western Regional qualified for the B.A.S.S. Nation Team Championship. Four other regionals will be held in 2021, including: April 21-23 at Milford Lake in Junction City, Kan.; April 28-30 at Lake Hartwell in Anderson, S.C.; June 23-25 at Lake Erie/Presque Isle Bay in Erie, Pa.; and Sept. 1-3 on the upper Mississippi River in La Crosse, Wis.