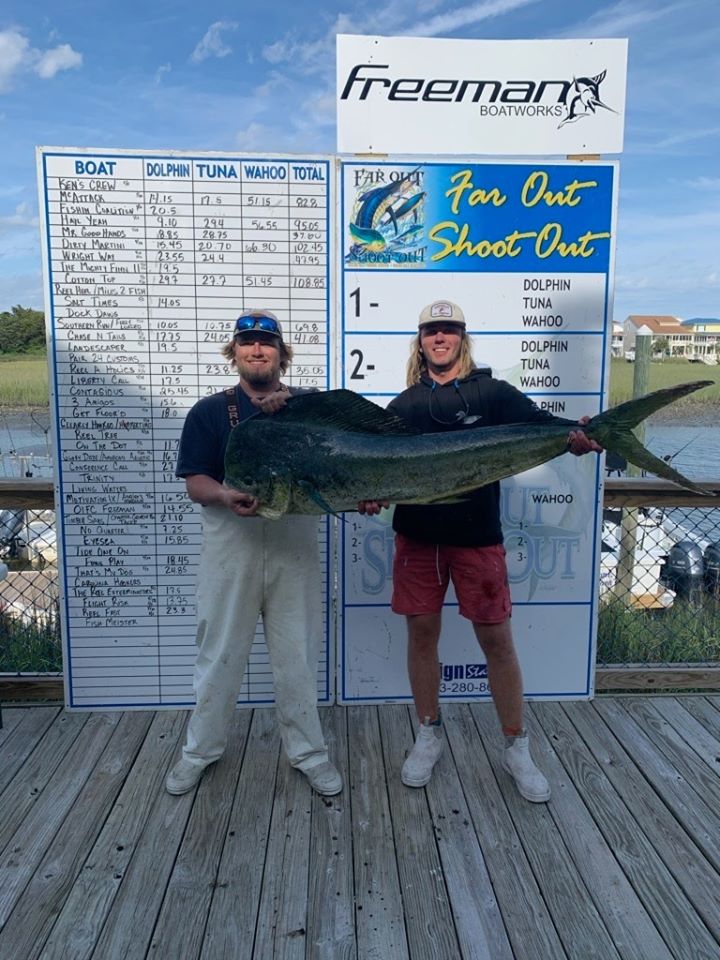 Things are finally beginning to reopen as people and government continue to deal with the COVID 19 Virus and one activity at the forefront is fishing tournaments.  Most North Carolina saltwater fishing tournaments are run by or dedicated to charities and good causes and both the organizers and fishermen were chomping at the bit to get things moving forward and get fishermen on the water.  It has taken several versions of novel approaches and cooperation from fishermen, the state, marinas, and others, but things are moving forward.

Most folks have at least passing knowledge of the NASCAR iRacing Invitational Series that was done on computer setups and broadcast in simulcast, looking much like an actual race.  Just recently NASCAR has returned to actual racing, but without fans in the stands and minimizing crew and support people.  This is being heralded as the first live sport to return, but it isn’t.

Tournament fishing was the first live sport to return. It began with bass tournaments that posted rules online a few days in advance and gave time for questions to be asked and answered before fishing began.  There were no captain’s meetings and therefore no crowds.  Fish were measured and pictures taken, which were emailed to the tournament headquarters to be examined and compared by tournament staff.  The winners were decided from the lengths in the pictures.

Just as an aside:  Many kayak fishing tournaments have been using this style of competition for years in both fresh and salt water.  The tournaments were called CPR tournaments and that stood for catch, photograph and release.  This adapted to boat tournaments well for fish that could be handled, and released without harm.

The first N.C. saltwater tournament that returned is the Far Out Shoot Out presented by and held April 18 to May 16 at the Ocean Isle Fishing Center in Ocean Isle Beach ,N.C.  All registration, the captain’s meeting and questions were done online.  Fishermen declared their fishing days online and only came to Ocean Isle Fishing Center to weigh their catches.  The winners were announced online and their checks were mailed.  There was never a gathering of people.  This tournament was a success and 41 teams fished.

The winners were the father and son team of Brian and Austin Aycock on the Hail Yeah.  Not only did they win the overall with a 56.55 pound wahoo, 43.1 pound mahi and 29.4 pound tuna, their dolphin was heavy enough to win the Mahi Category and their wahoo placed third in the Wahoo Category.

This format has been repeated for several club type tournaments and they have been held without incident.

The next large tournament to be held is the Swansboro Rotary Blue Water Tournament over Memorial Day Weekend.  This tournament also followed the format of registrations being online only, but will expand to having a virtual captain’s meeting  and awards celebration.  Once again, there won’t be any large crowds, just small groups of family, friends and a few spectators at the scales.  N.C. was slated to begin a modified version of Stage 2 for reopening the state by the time of this tournament and there were short term rentals and limited restaurants for participants and their families.

The Cape Fear Blue Marin Tournament is still on for May 27-31.  Final registration will be at Intracoastal Angler in Wilmington from 3:00 to 6:00 P.M. on May 27.  The captains meeting and other changes are to be posted on their website (www.capefearbluemarlintournament.com) by the beginning of that week.  One change already noted is that the tournament weigh-in at Sea Path Marina in Wrightsville Beach will be closed to the public.

The Big Rock Blue Marlin Tournament Committee began revamping the Popular Morehead City tournament as soon as it was thought the COVID-19 Virus might affect the tournament.  On May 1 they sent a press release that stated, “During its monthly board meeting Thursday, The Big Rock Board of Directors voted unanimously to proceed with the 62nd Annual Big Rock Tournament and the 23rd Annual KWLA Lady Angler Tournament.  The tournaments will begin as scheduled with the KWLA Lady Angler Tournament on June 6 and the Big Rock Blue Marlin Tournament competition June 8 -13.  The board of directors has been monitoring the impacts and responses to Covid-19 and feel the tournaments can proceed safely and responsibly with no social events while asking that participants and spectators adhere to social distancing and other health precautions which are now well known to all.  With the tournament competition schedule in place, the board is continuing to work on details for the balance of tournament week.

“As usual, you can listen to the tournament VHF radio feed featuring Randy Ramsey, watch the weigh-ins on Big Rock TV and follow tournament results at www.thebigrock.comand on the Big Rock App.  Online viewing of the tournament will be enhanced through Facebook and there are working plans for a drive-thru dinner on Wednesday night for tournament participants.”

Many king mackerel and other saltwater fishing tournaments have been looking for responsible ways to continue their tournaments as scheduled.  The Cape Lookout Shootout King Mackerel Series has rescheduled two of their Southern Division tournaments into June and hope the country will be far enough into reopening by then the tournaments can proceed on their usual format.  If this is not the case, they are prepared to adjust or reschedule as necessary.

The Southern Kingfish Association (SKA) season began in January and several of the early tournaments had already been held before the country underwent lockdown to help minimize the spread of COVID-19. Since then, some SKA sanctioned tournaments have been cancelled and some postponed.  Each tournament has to make the decision based on directives from their state and local governments.  The first SKA tournament in the Carolinas is the Jolly Mon King Classic in mid June and it has been confirmed to be held as scheduled, while being appropriately COVID-19 compliant.

PointClickFish.com will continue to update tournament statuses as they become available.  Check back here for the most recent information.