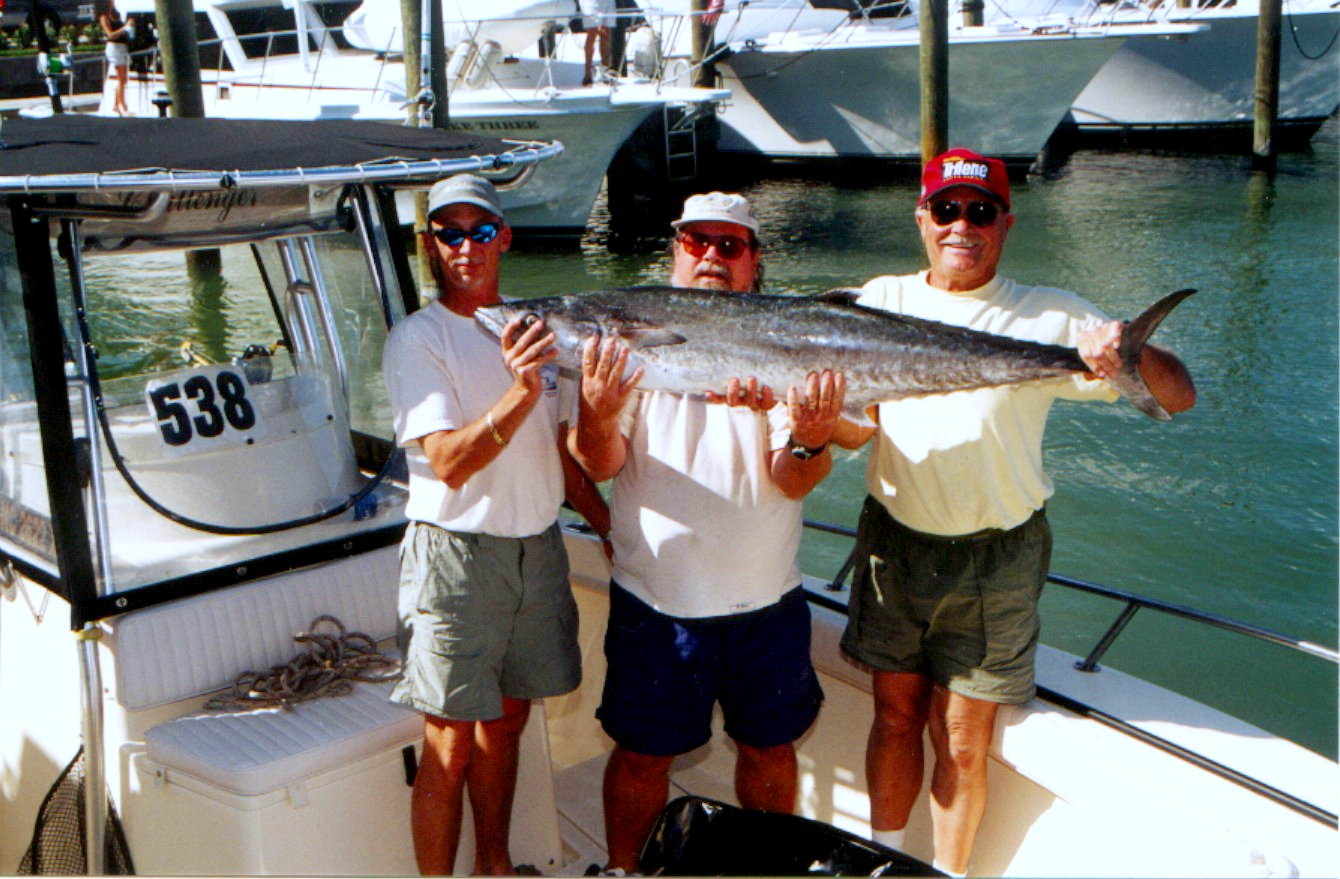 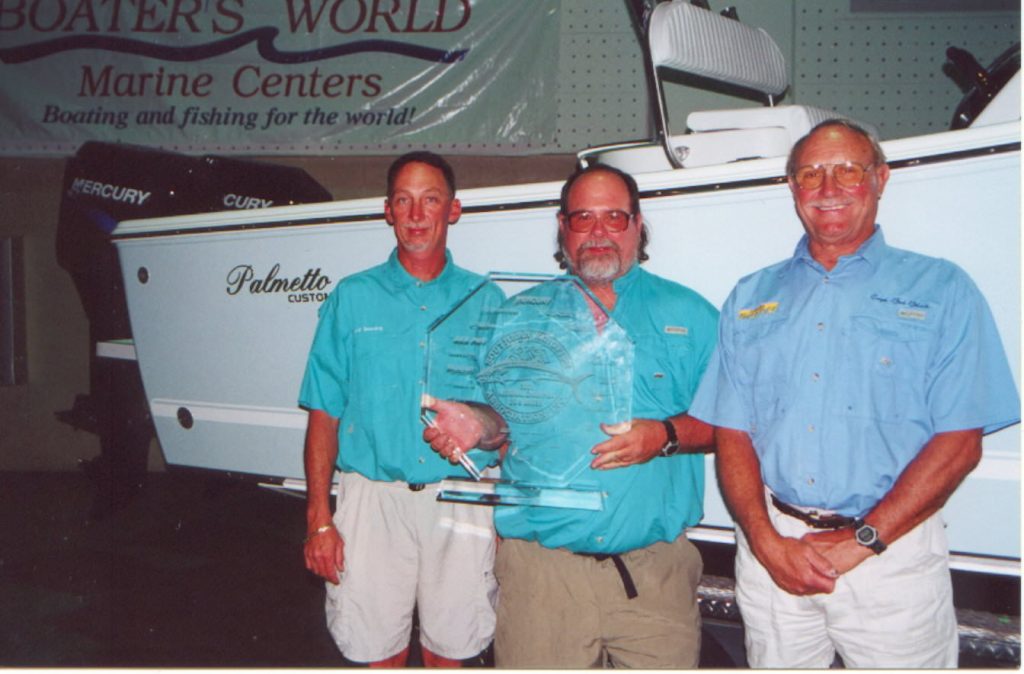 NOTE:  Capt. Jerry Dilsaver and his Carolina Adventure Fishing Team won the SKA National Championship Small Boat Championship at Fort Pierce in 2001  with a total aggregate weight that surpassed even the Open Boat Class.  The Carolina Adventure Fishing Team, consisting of Dilsaver of Oak Island, N.C., Capt. Bob Black of Oak Island, N.C. and Richard Denning of Willow Springs, N.C., has fished under several names since then and they have a history of going against the general knowledge and rumors while still catching well, especially in Fort Pierce.  That history makes these tips a great tool for fishing in the area.

The SKA is heading to Fort Pierce, Florida for the postponed National Championship Tournament and once again those who remember or have been reading old issues of Angler Magazine are calling or sending a bunch of emails and texts my way.  I don’t have a sure-fire answer on where to catch big fish, but my teammates, Bob (Black) or Richard (Denning), may have some suggestions or locations to fish.  I’d prefer to offer a few tips I think everyone might find helpful for this tournament and king mackerel fishing in general.

What I consider the most important advice is to put in some time gathering information and trust the information you gather.  This is easy if it goes along with what “everyone” is saying, but you need to commit to your information even if it is different.  You have to formulate a game plan for this (and every) tournament and you should follow it.  You can’t follow someone else’s game plan.

Sure, sometimes things like the weather change unexpectedly and you have to alter your plan, but alter it as little as possible unless you also had a “Plan B” and then you can switch to it.  You may get lucky following a friend, but it’s just getting lucky and it may not work for you.

To formulate your plan, look for information anywhere you can find it.  We all think of other fishermen, tackle shops and marinas, but how about commercial fish houses and the fishermen that offload there.  You should have a BS meter, but listen before you judge.  A chance meeting and five minute conversation with a lady that worked part-time at one of the marinas gave us some information we didn’t hear anywhere else and it was a big part of our plan in 2001.  The information was correct and directly contributed to our win.

Understand that someone, or several folks, can give you their best information, but it is only close, not quite exact.  If they show up there beside you, they believed what they told you was correct.  I like to have information from several sources that can be combined.  Many times this can help you move from close to pinpointing the fish.

This year’s tournament is a little earlier than I would like, but I still wouldn’t be afraid to fish close to the beach at Fort Pierce.  This is especially true if there are schools of bait running nearshore.  Fish follow bait!

The numbers of big fish near shore won’t be high, but there will be a few and all you need is one each day.  You’ll probably need lots of patience, as it could be a while waiting on a strike, but the odds are pretty good that strike will be a nice king.

The largest king I know of from along the Fort Pierce beach was caught during the 1998 SKA National Championship.  It weighed 52 pounds and was chasing bait around an artificial reef in less than 40 feet of water.  We caught several in the 30s there that day and lost one we estimated at 45 pounds several years later when a leader broke.

Bait can sometimes be an issue at Fort Pierce and it is wise to arrive a few days early and check out the bait situation.  Typically there are bait vendors selling goggle eyes, blue runners and other baits.  These will be at a premium and you’ll probably need to reserve them and pre pay to get them.  Many fishermen consider goggle eyes to be well worth the effort to catch them or the expense to buy them.  Blue runners are usually their second choice.

There are also menhaden, mullet, bluefish, Spanish mackerel, cigar minnows, sardines, greenies, threadfin herring and more in the waters around Fort Pierce.  They may not be your preferred baits, but they’re better than none.  Our big fish during the 2001 championship hit a 3 pound mullet we had dropped well behind the boat.  I believe that sometimes having the odd bait in a crowd helps draw strikes and like to mix a few odd baits in a spread.

Something to keep in the back of your mind is that strong fronts roll down the mid Florida Coast until late in the spring and some of these can muddy the water up bad inshore.  The normal thought when this happens is to head offshore to clean water and that often works.  Another couple of things to consider if this happens is to use the largest baits you can find when the water is dirty and because the Gulf Stream is closer to shore here, the water to the south clears faster, so heading south along the beach can be a good decision too.

I don’t care where I am fishing or the time of year, if I’m trying to catch large kings and there are bluefish around, I’ll have at least one bluefish in my spread.  I prefer live bluefish, but one year off Cape Hatteras we caught a fourth place fish on a dead bluefish trolled 15 feet behind the motors where the prop wash would move it around and make it appear injured and swimming erratically.  It was late in the day, bait was scarce and we were trying to fill a spread.  Thankfully it worked and that has stuck with me since.

Ribbonfish are also excellent baits for fishing off Fort Pierce.  They are typically caught by shrimpers as they are in the bottom third of the water column, so they are most natural when trolled on a downrigger.

I am a believer in chumming and am convinced there have been times when chumming heavily was the key to pulling one of the larger kings from a crowded spot.  Sure, you’ll usually catch a few sharks and other undesirables, but that means your chum is working.  There have been days when a big king struck pretty quickly after starting fishing and days it took several hours.  The key is to keep the chum going as an appetizer, not the meal, and be ready when Ol’ Mossyback decides to feed.

Hopefully something mentioned here will help get you in the right spot and convince a pair of big kings to chomp your baits at the SKA Championship in Fort Pierce.  Remember you’re in Fort Pierce, which is a great place to fish and even slow days can get real exciting in a split-second.  Most of these tips will also help catch fish in your home waters during divisional competition and help you qualify for next year’s SKA National Championship.